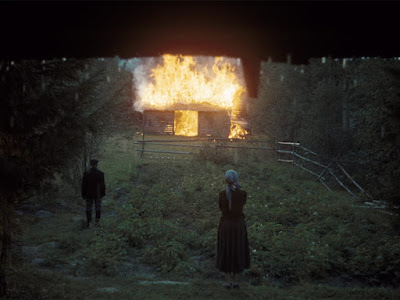 Andrei Tarkovsky's most overtly autobiographical film may also be his most impenetrable film, at least for viewers who insist on interpreting meaning, onfiguring out how the various piece fit together. But why waste a trip (either your first or your fiftieth) through “Mirror” (1975) on such childish games? Stop trying to solve the puzzle – there is no solution, and possibly no puzzle at all. Let the images and sounds of this poetic journey flow over you, cherish them for their sheer beauty and emotional resonance, and you may find “Mirror” to be a cinematic experience like few others.

Co-written by Tarkovsky and Alexander Misharin and loosely structured (and unstructured) as the reminiscences of a dying poet named Alexei, “Mirror” ranges freely across time periods. Young Alexei (Ignat Daniltsev) lives with his loving mother Maria (Margarita Terekhova) while also yearning for an absent father who only intermittently visits the family home, an isolated sanctuary that can only protect the boy for so long from the eruption of World War II. An adult Alexei (heard, not seen) argues with his ex-wife (also played by Terekhova), often about their son Ignat (also played by Daniltsev). The fact that the same actors play two different characters in two different time frames provides just the faintest essence of how disorienting “Mirror” can be even after repeat viewings.

It would be misleading to talk much more about plot. Just as the dying Alexei quests through his timeline to relive his most vivid memories, a viewer fresh off a screening of “Mirror” will likely recall a handful of evocative scenes with no particular connection to each other. In one of the film's most-referenced sequences, young Alexei and his mother watch helplessly as their barn burns down. The camera peers through a doorway partially veiled by a cataract of rain as the flames outside lick high and whip in the wind. Like so many Tarkovsky films, “Mirror” heavily emphasizes the natural elements. A field of tall grass ripples in a sudden breeze, a room crumbles apart under a flood of water pouring through the walls.

In a moment likely dreamed by Alexei, the mother washes herself at a basin. As she lifts her head from the water, her face is completely obscured by a thick mass of her dripping wet hair. Any way she moves, her mask of soaked hair hides all vestiges of human expression, a monstrous image straight out of a horror movie, yet perhaps intended simply as a tangible remembrance of mother. Later, we see the mother levitating above a bed, this time with her hair stretched out behind her, defying gravity, mother as the all-powerful mystical figure beyond mere mortal comprehension.

With actors playing multiple roles and the film drifting from era to era and from dreams to reality with no clear delineation among them, the most concrete presence in “Mirror” may be the camera itself. Free-ranging, cinematographer Georgy Rerberg's camera roams in long takes through the corridors of the house, slowly turning corners, panning to look into and away from many mirrors and through windows to the outside world, frequently from no identifiable perspective save perhaps that of Tarkovsky himself.

A brief listing of autobiographical elements may be relevant. Tarkovsky meticulously reconstructed his childhood home on its original foundations to serve as a major production set, and cast as his mother as the older (briefly glimpsed) version of the mother in the film. His father, writer Arseny Tarkovsky, was also largely absent from home, but is present in the film in voice-over, reciting his own poetry. But while Alexei (at all ages) is clearly a stand-in of sorts for Tarkovsky, don't assume a direct, literal correlation. That's too facile a take for such a complex, ambitious film.

“Mirror” doesn't just relay the experience of an individual recalling his life, but also the collective memory of a nation. Mixed in with the recollected moments and the dream sequences, Tarkovsky also uses black-and-white newsreel footage, including a harrowing sequence of Red Army soldiers crossing muddy Lake Syvash in 1943, material that had not been seen previously by the public. Alexei's story of a childhood before the war, an adolescence defined by the war, and an adulthood in the aftermath of the war is also the story of his whole country. Likewise, the mother in the film is not just a mix of Tarkovsky's real mother and Alexei's fictional mother, but the embodiment of multiple generations of Russian mothers.

But that's enough interpretation. Better to remember “Mirror” for its indelible images: the levitating mother, the disappearing heat ring left behind on the table by a ghostly tea cup, and the bird that lands on a boy's head. What does it all add up to? A masterpiece. 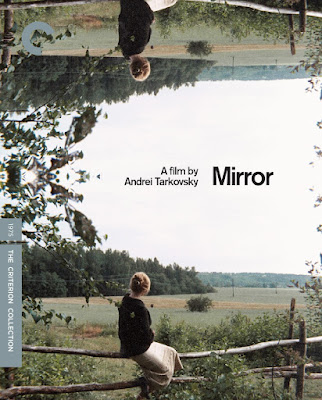 The film is presented in its original 1.37:1 aspect ratio. This new 2K digital transfer showcases naturalistic colors and sharp image resolution. I've only ever had the chance to see “Mirror” on the mediocre old Kino DVD from 2000 and this 1080p transfer looks like an entirely new movie by comparison. I can't evaluate how true to the original it is, but it looks great.

The linear PCM Mono sound track is sharp with no distortion. Dialogue, sound effects, and music (a mix of classical – lots of Bach – and an electronic-heavy score by Eduard Artemyev) are all cleanly mixed. Optional English subtitles support the Russian audio.

Criterion has loaded this two-disc Blu-ray set with a diverse array of extras, both new and older.

Disc One includes the film and a single extra. “Andrei Tarkovsky: A Cinema Prayer” (2019, 102 min.) is a recent documentary by Andrei A. Tarkovsky, the filmmaker's son. It primarily consists of audio of director Andrei Tarkovsky speaking, played along with film clips and family photos. The director speaks frankly about this childhood, his philosophy, and his career.

Disc Two's collection begins with “The Dream In the Mirror” (2021, 54 min.), a new documentary by Louise Milne and Sean Martin, shot for Criterion. This documentary features several of Tarkovsky's collaborators and family members, including his sister Marina who tells us that their parents “weren't too thrilled with what they saw” when they attended a screening of “Mirror.” This feature touches on many details about the film's production.

“Islands: Georgy Rerberg” (2007, 52 min.) is a Russian documentary shining a light on the career of the cinematographer who shot “Mirror” as well as Tarkovsky's “Stalker” (1977).

The disc also includes a new interview (22 min.) with electronic composer Eduard Artemyev who explains that Tarkovsky informed him he wanted the sound in the film to be a character in its own right.

We also get a 2004 interview (32 min.) with screenwriter Alexander Misharin who co-wrote “Mirror” with Tarkovsky. He's a great speaker and storyteller who goes into detail about the tortured development of “Mirror.” He also speaks about his friendship and long-term working relationship with Tarkovsky. And he takes credit for “forcing” Tarkovsky to finally make “Mirror” when the director remained uncertain about actually realizing his passion project.

The extras wrap up with a couple of short news clips featuring Tarkovsky on French television in January 1978, running 4 min. and 3 min. respectively.

The thick, square-bound insert booklet runs 88 pages. It starts with an essay by critic Carmen Gray. The bulk of the booklet reprints the original 1968 film proposal for “Mirror” and then the literary script for the film, both by Tarkovsky and Misharin.

For quite some time during post-production, Tarkovsky feared his footage couldn't be shaped into a coherent film, that he might have failed to achieve the dream project he'd labored over for nearly a decade. Today, “Mirror” is considered both one of Tarkovsky's masterworks and one of the greatest films of all-time. In the 2012 “Sight and Sound” poll, it finished in the top 20 films as voted by critics, and in the top 10 as voted by directors. Amazingly, it has never previously received a proper high-definition release in the North American region, making this Criterion release one of the major home theater events of the year. With its sharp transfer and strong collection of extras, this two-disc Blu-ray set from Criterion does justice to this remarkable movie. To borrow a phrase from a great artist, it's true poetic cinema. 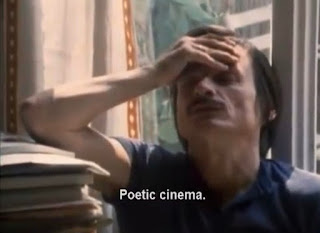 Posted by Christopher Long at 2:21 PM