If you've ever wanted to know the story about the bearded man on the Burt's Bees packaging, then you're one up on me. Before this documentary I thought the company only made throat lozenges, the ones I pass by on my way to the store brand that costs half as much. But Burt's Bees' line of personal care products is so extensive and so popular that the company that began as a couple of beehives in rural Maine was ultimately sold to Clorox for $925 million in 2007.

Shavitz, now in his seventies, lives on a farm in Maine ('round about where he started tending his first hives) where he doesn't see the point in modern amenities like hot water or alarm clocks. He goes to sleep when it gets dark and wakes up with the sun because that's just the way he does things. A similar mindset led a twenty-something Shavitz to abruptly abandon New York (his hometown) and a career in photojournalism to drift north, live the simple life, and just fall by chance into the beekeeping business.

He probably would have been content to sell honey out of his truck for the rest of his life, but then he met a single mother named Roxanne Quimby. She had both ambition and talent, and thanks to a brilliant marketing campaign she expanded Burt's Bee into a multi-national brand worth millions. Shavitz never forgave her for it. All he ever wanted was a kindred spirit to help him feed the wood stove and keep the hives, and he still feels betrayed that she didn't want the same thing.

Director Jody Shapiro's “Burt's Buzz” (2013) only hints at this conflict until exploring it deeper in the final third of the film, opting instead to place Shavitz and all his eccentricities at center stage, following him about his daily rituals. He's a fascinating man in no small part because of how little of himself he is willing or able to reveal. The only time he displays any deep emotion is when he talks about the death of his beloved golden retriever Rufus, but this carefully guarded man wears all of his wounds openly. Pretty much everyone and everything has proven to be a disappointment, so he sticks mostly to his farm and his dogs and does his best to shut out the parts of the world that don't suit his idealized vision of life.

He's not entirely a hermit, however. Though Quimby more or less pushed him out of the business, he is still the corporate spokesman and we get to see this bemused celebrity doing his best to make it through a trip to Taiwan and the scores of enthusiastic Burt's fans who want to meet him. In moments like this, it's fair to question just how savvy Shavitz might be in spinning a portrait of a crusty old recluse who doesn't care about money, fame, or modern technology. He's still willing to play the game and work the crowd; is the Burt we see in the film any less a creation than the one in Quimby's marketing campaign?

Whatever the case, the Burt Shavitz of “Burt's Buzz” (2013) is a magnetic presence who makes a natural subject for a documentary. If the film leans a bit too heavily on his stubborn idiosyncrasies to propel the story, viewers probably won't object to an enjoyable and occasionally surprising visit with a true American original. More information about the corporate takeover by Quimby would have been welcome, but would have made for a very different type of movie. 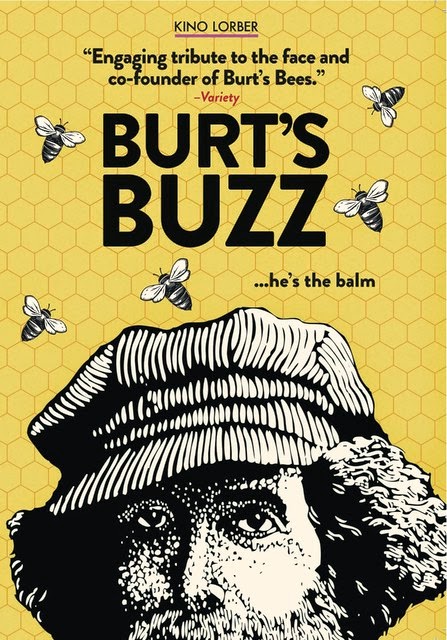 Video:
The film is presented in a 1.78:1 anamorphic transfer. The high-def transfer from Kino Lorber is a solid affair with strong detail and naturalistic color. The film has a lot of talking heads though we also get some nice rural New England footage.

Audio:
The 5.1 Surround track is sharp and clear though there isn't a whole lot to it beyond dialogue which is all clearly mixed. No subtitles are offered.

Final Thoughts:
Since I was only barely aware of Burt's Bees before, I can't judge how much of an audience there will be for a film about its co-founder. But Jody Shapiro has found an engaging and entertaining subject. There's just barely enough material for a feature-length documentary, but it's a fun watch.
Posted by Christopher Long at 7:54 PM