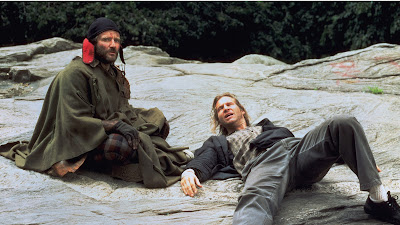 Mercedes Ruehl is just great, so marvelous it's hard to believe she actually won an Oscar for the role. As Anne, the proprietor of a low-end video store in New York City, Ruehl portrays a vibrant woman with the endearing combination of self-confidence and neurosis that makes her an instant point of identification. A lesser actress might have turned Anne into a co-dependent enabler whose only function is to boost the confidence of her undeserving lunkhead of a boyfriend, but Anne has come to her very active belief in the primacy of romantic love through painful experience and serious consideration. She's not a pushover but an acolyte, and if she strokes that lunkhead's ego it's because she believes it's an act of kindness necessary to cope in a scary world. Acts of kindness are highly prized and hard fought in this film.

That lunkhead's first name is Jack and his last name is Lucas, but if you cut out the “Lu” and then say the whole name out loud you get a better idea of what kind of guy he is. In the opening sequence, Jack is a radio shock jock whose success has made him arrogant though his pride goeth quickly when a thoughtless bit of advice he spews to a listener inspires the lost soul to commit mass murder, a tragedy that claims Jack's professional reputation among its victims.

Jack is played by Jeff Bridges who is invariably great, even here when he is cast against type as a narcissistic twit who doesn't appreciate the considerable gifts he's been granted, chief among them the amazing Anne to whom he turns only after he is both down and out. As indicated above, he does not deserve her devotion in any way. The script does argue, however, that Jack deserves a shot at redemption for his callous behavior and that opportunity comes in the form of a homeless man known as Parry. 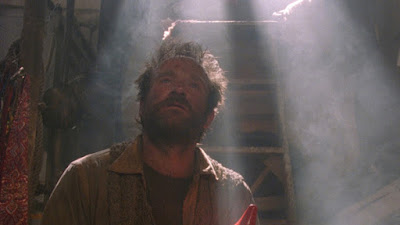 Parry is played by Robin Williams and it's impossible today to watch his performance without thinking of the comedian's recent death. This time a year ago, perhaps you wouldn't have felt guilty for finding parts of his typically energetic and insistence performance to be a little irritating. Or even a lot. It's still OK to think that. Where some actors are love 'em or leave 'em types, I have always thought of Williams as a love 'em AND leave 'em guy whose genius was the ability to work your last nerve and still find a way to burrow under your skin and win a place in your affection.

That's definitely the case with Parry who was once fully assimilated into yuppiedom just like Jack, but has retreated into a world of myth and madness as the result of his own personal tragedy which, by sheer coincidence (ahem), is directly connected to Jack's carelessness. Parry believes he is a knight (with garbage can shield) on a mission to retrieve the Holy Grail which remains just tantalizingly out of reach in an Upper East Side mansion; the invisible little people who advise him told him about it. Parry immediately enlists his new friend in his noble quest, but Jack resists for as long as possible.

That's all grist for Williams' manic mill, but while he certainly hurls his whole hairy body (on full display in one scene... fair warning) into Parry's most delusional moments, he remains controlled in other scenes, particularly when craftily pitching woo (“I have a hard on for you the size of Florida.”) at his love interest, the shy, bookish Lydia (Amanda Plummer, also very good though in a smaller role than the others.) Williams is sometimes a little irritating and more than a little mawkish as he works those puppy dog eyes and scraggly beard, but it's the kind of performance that just keeps gnawing at you and is one you're unlikely to forget, at the very least for the earworming lyric “I like New York in June.” 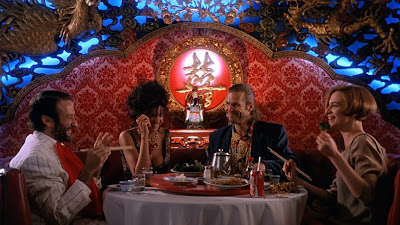 Compelling characters and fine performances from all the major players. So what's not to like? Well, there's the little problem of the pie-eyed fairy tale premise which seems terribly precious to me but I suppose it's a “You either buy into it or you don't” kind of thing. First-time feature screenwriter Richard LaGravenese took the risk of investing fully in his romantic conceit and won the admiration of producer Lynda Obst who battled for the project for years and enlisted other enthusiastic collaborators, so plenty of smart people bought. But the script relies far too heavily on the “magical homeless man” as a device for my taste. Not just Parry, but also sanitized, user-friendly sources of wisdom and comic relief from characters played by Michael Jeter, Tom Waits, and others who exist primarily to help Jack to complete his hero's journey.

It all still holds together until the final act careens wildly off the rails (Ed. Note: I just read a review that asserts the second act, easily my favorite stretch, stumbles but the flawless final act redeems the whole movie – everyone's got an opinion, huh?) The humbled Jack has spent nearly two hours ostensibly being redeemed by his interactions with Parry and friends (and Anne, of course), chucks it all in the dustbin in an instant, then abruptly re-reverses course at the slightest prompting in order to launch an unconvincing effort to complete Parry's quixotic quest.

Yes, it's another act of kindness but one that feels motivated strictly by the dictates of the plot rather than character. Furthemore, the suggestion that a friendly gesture is all that's needed to cure Parry's mental illness comes off as cheap, if not outright demeaning. I realize it's make-believe, but it's a bit of make-believe that leaves me a bit queasy; in general, the film's treatment of trauma feels rather facile. It also doesn't help that Anne is barely around for the final half hour as Ruehl's assured vitality is sorely missed.

There's little about the final act that invites an ironic reading except for the presence of director Terry Gilliam who was brought on board after a series of directors, including James Cameron, were previously attached to LaGravenese's hot potato spec script. Gilliam had little interest in directing a film he hadn't written but was convinced that the project would suit his idiosyncratic sensibilities and that he would have the creative control that had been denied him on previous studio projects. 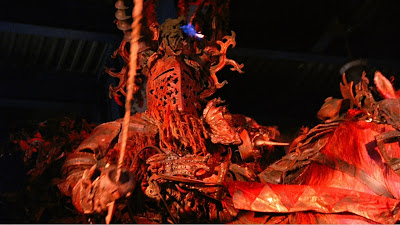 That seems to be the case here, but it's hard not to think back to the bitter struggles for the soul of Gilliam's masterpiece “Brazil” (1985) and its vilified, studio-mandated “Love Conquers All” ending. Anne is actually given the line “Amor Vincit Omnia” (Latin for “Love Conquers All”) and it's tempting to read it as a warning of what's to come in a finale which doesn't seem much different in spirit to that disowned version of “Brazil.” Perhaps Gilliam was in a different mood or preferred to respect LaGravenese's script, but it's hard to reconcile the ending of “The Fisher King” with the rest of Gilliam's work. And in many ways this is the least overtly Gilliam-esque Gilliam film. There are a few fish-eye lenses thrown on for distortion, a fantasia dance sequence at Grand Central Station, and a Red Knight roaming the streets of New York, but “The Fisher King” is more grounded in reality than most of the director's work. 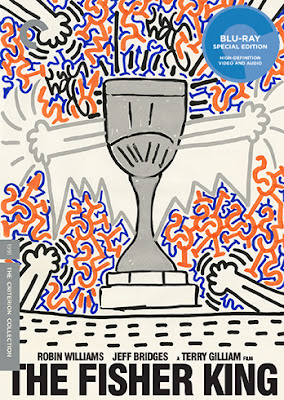 Video:
The film is presented in a 1.78:1 aspect ratio. Since Criterion did not include the usual language of “original aspect ratio” I checked and it appears the original was 1.85:1. The transfer is listed as being “approved by Terry Gilliam” so I guess this was his choice. There are quite a few night scenes and darker indoor sequences in the film, and this 1080p transfer provides impressive detail in the gloomiest, moodiest shots by cinematographer Roger Pratt. Image detail is sharp throughout.

Audio:
The DTS-HD Master Audio 5.1 surround track is one of the most dynamic recent mixes from Criterion. The lossless audio offers an impressive sense of depth, preserving some of the more expressionistic sound design as well as the fine score by George Fenton. Optional English SDH subtitles support the English audio.

Extras:
Criterion has absolutely stacked the deck on this Blu-ray release.

The film is accompanied by a commentary track by Terry Gilliam. This was originally recorded in 1991 for the laser disc release. It's hard to believe we're deep enough into the post-VHS video age that we can have a commentary track a quarter century old. I haven't had a chance to listen to it but I know it's been much admired by fans for quite some time now.

The disc includes six Deleted Scenes running a total of 8 minutes. These are unfinished scenes which are presented with footage from the final cut to provide context for where they would have appeared. Nothing too revelatory here. Optional audio commentary by Terry Gilliam.

The meatiest extras are two new interviews with cast and crew, including Gilliam, Obst, LaGravenese, Bridges, Ruehl, and Plummer. This could have been included as a single hour-long interview but has been broken up into two half-hour interviews that cut back and forth among the various participants. The first of these (titled “The Fool And The Wounded King”) packs in quite a bit of information about the film's production with producer Lynda Obst still over the moon about what she claims is the greatest screenplay she has ever read. Obst helped rescue the project from Disney (who had no idea what to do with it) and to protect it until the right director came along. Ruehl also speaks eloquently about how the film's subject connected with her own studies of literature, psychology, and myth. The second interview (“The Real and the Fantastical”) isn't quite as compelling, but is still worth watching.

“The Tale Of The Red Knight” (23 min.) gets off to a slow start, but eventually gives artists Keith Greco and Vincent Jefferds the chance to talk about creating one of the film's most prominent special effects. I felt this was a bit too long but it still has some good stuff.

We also get two extras focusing on Jeff Bridges. “Jeff and Jack” (20 min.) relates how Bridges learned to portray a shock jock under the tutelage of acting coach/former radio talk show host Stephen Bridgewater. “Jeff's Tale” (12 min.) gives Bridges a chance to show off his photography skills. Bridges has taken many photographs on his shoots over the years with his Widelux Camera (described by Bridges as a panning still camera). He likes to put together books of photos to give to cast and crew members. Here he shares some stills from the set of “The Fisher King” along with commentary.

“Robin's Tale” (19 min.) is a 2006 interview with Williams in which he talks about his experience on the film, particularly the excitement and challenge of shooting on New York locations, often at night.

We also get a brief assemblage of Costume Test footage (3 min.) with the four major actors.

The collection wraps up with 9 full minutes of Trailers.

Final Thoughts:
I usually start reviews by referencing the director. This time I think I set a personal record for latest mention of a major auteur. Perhaps that's because this only feels partially like a Terry Gilliam film to me which certainly doesn't make it bad, but does explain why it's probably my least favorite Gilliam. However, it does offer some of the best acting in any Gilliam movie and that's enough for me to enjoy “The Fisher King” even with significant reservations about the ending. This Criterion high-def presentation is magnificent with a splendid high-def transfer and a passel of extras. They've release a lot of Gilliam and here's hoping that one day not too far in the future we'll be enjoying the three-disc super-deluxe Blu-ray release of “Terry Gilliam's 'Don Quixote.'”
Posted by Christopher Long at 8:47 PM