Taking advantage of the brief cultural Thaw under Nikita Khrushchev, Paramount distributed King Vidor's adaptation of Tolstoy's“War and Peace” (1956) in the Soviet Union in 1959. It was a hit as Russian audiences found Audrey Hepburn irresistible as their beloved Natasha Rostova and apparently managed to keep a straight face at the sight of Henry Fonda as Count Pierre.

Soviet authorities were less thrilled by the idea of a commercially successful American adaptation of the greatest Russian nationalistic novel, and they soon brought the full power of the state apparatus to bear in producing a home-grown response. Sergei Bondarchuk, an accomplished actor with only one directorial outing under his belt, emerged as the unlikely (and largely unpopular) choice to helm a project that would be both blessed and cursed with nearly unlimited resources along with an open-ended timeline. Bondarchuk was charged with putting Hollywood to shame by any means necessary, and boy did he ever take advantage.

Bondarchuk began shooting before “Lawrence of Arabia” (1962) was released and didn't finish until well after “Dr. Zhivago” (1965) charmed audiences around the world, but the Soviet director had an epic vision whose scale made David Lean look like a penny-ante operator (Ed. Note: OK, not really. Nobody could ever make David Lean look small). With over 300 speaking parts and battle sequences that employed more than 100,000 extras, Bondarchuk's “War and Peace,” released in four parts running over seven hours total, assumed the burden of representing the very soul of the world's largest nation, often soaring above the sprawling action with the kind of god's-eye view that only unfettered access to the Soviet Air Force can grant. The film begins and ends by gliding through the clouds, and you better believe it takes every opportunity to fly with the angels (and, yes, there's even a literal angel at one point). The great critic Manny Farber groused about the grandiosity of “white elephant” art – “War and Peace” puffs its hairy, nationalistic chest all the way to “blue whale.”

Bondarchuk (who fired a series of cinematographers, eventually settling on the relatively inexperienced Anatoly Petritsky for most of the project) prefers to film his massive battles from a remote vantage point, either from the heavens or the crest of a hill. The camera frames some of the most elaborate clockwork dioramas cinema has ever witnessed, with thousands of tiny soldiers surging across muddy terrain in tightly-controlled geometric patterns, billows of smoke enveloping them (and often the camera) in the chaos.

The movie occasionally cuts in to details in the great pageant, the tortured faces of wounded soldiers or bystanders and dozens of horses falling to the hard ground (maybe hundreds – far too many for my sensibility anyway), but Bondarchuk generally maintains an imperial distance, emphasizing the historic sweep over individual experience. This propensity for spectacle achieves a glorious and frightening apotheosis during the 1812 Battle of Borodino, the bloody, senseless culmination of which consumes much of the third film in the series, leaving viewers as shaken as the overwhelmed and largely helpless combatants of both the Russian and French armies. Ditto for the burning of Moscow depicted as a literal hell on Earth, flames stretching to both ends of the wide-screen frame.

Bondarchuk displays a similar interest in the choreography of masses of people when he turns his attention to the elites in St. Petersburg. Safe and distant from the horrors of war, they gather for one ornate ball after another, to glorify Russian power brokers or to introduce debutantes to society. Once again, viewers are treated to the sight of hundreds of small bodies in formations, vying for attention in on the battlefield of courtly society. Petritsky had to got innovative to film the numerous dance sequences, placing his camera operators on roller skates, though with relatively quick cutting, these shots still lack the sinuous virtuosity of a Max Ophuls ball (admittedly, a lofty comparison.)

The film's monumental approach leaves less room for intimacy, and omits much of the copious detail Tolstoy devoted to the ruthless machinations behind the numerous marriage arrangements that account for much of the “Peace” portion of the novel. Vyacheslav Tikhonov is handsome and heroic as the dour Prince Andrei, great at suffering nobly but not terribly expressive. Petite teenage ballerina Ludmila Savelyeva brings an elfin grace to the role of young Natasha but (as in the novel) she's left to do little save be sweet, naïve, and occasionally a bit foolish. Andrei and Natasha's doomed love affair manifests mostly through a series of longing glances.

Count Pierre emerges as the most intriguing character, convenient since Bondarchuk chose to play the role himself, despite being about fifteen years too old for the part (he was still much younger than Henry Fonda). The timid yet quietly courageous humanist cuts quite the absurd and sometimes striking figure, a portly dandy prowling the hectic battlefield in his white top hat, blinking in confusion behind his glasses at a world full of people who refuse to behave according to the theories in his books.

“War and Peace” is big on grandeur, but sometimes too straitjacketed to breathe, to celebrate the pure joy of creation. Regardless, in sheer scope the film is nothing short of breathtaking, the epic of all epics. Even at seven hours, it can't hope to capture more than a fraction of Tolstoy's magisterial doorstop, but this is a film that had the resources of an entire nation behind it, and Bondarchuk proudly flaunts every bit of it. I'm not qualified to judge whether the film encapsulates the identity and soul of Russia – I'm not sure what that would even look like – but you have to admire a director and his cast and crew who were bold enough to make the effort. 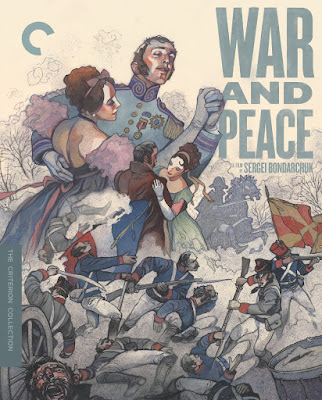 Video:
The film is presented in its original 2.35:1 aspect ratio. From the Criterion booklet: “This new 2K digital restoration was undertaken by Mosfilm from multiple partial 35 mm negatives from various archives, using a complete 35 mm positive print as a reference.”

Considering the multiple sources used and the massive scope of the restoration, the image quality is quite consistent throughout the four films, though I'll admit it's hard to track over seven hours spread out over a few days of viewing. The 1080p image is perhaps not quite as razor sharp as the very top-end Criterion transfers, but it looks strong overall, showing no problems in motion (even with thousands of bodies in motions and explosions all over the place). Colors are somewhat muted, but they're supposed to be.

Audio:
The DTS-HD Master Audio 5.1 surround track is at its most robust during the elaborate battle scenes. I can only imagine how immersive the experience must be in a theater with a booming audio system. At home, it's still quite impressive. Optional English subtitles support the Russian audio. Some French audio isn't subtitled, some is – all as Bondarchuk intended.

Extras:
As mentioned above, “War and Peace” was released as four separate films, totaling about 7-hours running time. Criterion's two disc Blu-ray release houses two films on each of the discs.

The only extra on Disc One is “Woina I Mir” (1966, 48 min.), a German B&W documentary by Thomas Schamoni. It provides some information about the production and includes an interview with Bondarchuk, but is pretty dry and not all that enlightening.

All of the other extras are stored on Disc Two.

We get a new interview with cinematographer Anatoly Petritsky (14 min.) in which he acknowledges some of the tensions on set with Bondarchuk (who seemed to alienate or at least stress out virtually everyone) but is also justifiably proud of some of his innovations on set, including a “flying” camera he put on cables to soar over the battlefields as well as his idea to put camera operators on roller skates to film the ballroom scenes.

The disc also includes a short new interview with Fedor Bondarchuk (6 min.), the director's son, who provides a little background regarding his father's career, and some of the resistance his father faced from fellow filmmakers unhappy that he was picked for the job.

By far the best feature on the disc is “Cold War Classic” (2019, 46 min.), a lengthy and substantive interview with historian Denise J. Youngblood. The author of a book about the film (and novel), Youngblood brings an astonishing amount of knowledge to this feature – I took almost a full page of notes, just about a record for me for an interview. She contextualizes the film as a response to the release of Vidor's “War And Peace” during the Thaw, discusses the numerous logistical challenges during production, and argues that, if you count access to the military, all state museums, etc., Bondarchuk's epic may be the most expensive film ever made with an estimated effective budget around $700 million to $1 billion! She also talks about the unhappy end to Bondarchuk's career, and his life in 1984. This is simply a fantastic interview, worth watching from start to finish and then watching again.

Criterion has also included an excerpt from the Nov 18, 1968 episode of the French TV program “Les Sovietiques” (27 min.) It touches on the film in general, but focuses mostly on actress Ludmila Savelyeva, framed here more or less as the Russian Anna Karina, and Western European viewers' idea of the modern Russian woman.

Disc Two offers another documentary, “The Making of 'War and Peace'” (1969, 31 min.), a Mosfilm release which functions mostly as propaganda about the glory of Bondarchuk's and, therefore, the Soviet Union's achievement. It's of interest, but don't take it too seriously.

The collection wraps up with the Janus Re-Release Trailer (2 min.)

Final Thoughts:
Sergei Bondarchuk's “War and Peace” often soars to majestic heights and occasionally devolves into pompous showmanship. It never lacks for ambition, and is as epic as epic filmmaking can get. Criterion's two-disc release provides a strong transfer and a solid collection of extras to do justice to this recently restored classic.
Posted by Christopher Long at 12:50 PM