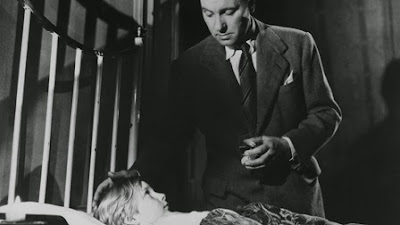 
Before their slightly more famous collaboration “The Third Man” (1949), director Carol Reed and writer Graham Greene teamed up to make “The Fallen Idol” (1948). Based on Greene’s 1935 short story “The Basement Room,” the film tells a classic tale of innocence lost. Phile (Bobby Henrey) is the precocious 8-year-old son of a London-based ambassador. Since his parents are usually too busy to spend time with him, he befriends the butler Baines (Ralph Richardson) who, in turn, seems quite fond of the boy.

Phile enjoys a privileged existence in which everyone and everything conspires to provide him more opportunities to play and to have fun; everyone, that is, except for Mrs. Baines who serves as the boy’s strict governess. Mrs. Baines is played with a stony face and withering stare by Sonia Dresdel who does her best to out-witch Margaret Hamilton and out-shrew Mrs. Fawlty. Phile chafes under Mrs. Baines’s iron hand and lets her know it quite plainly: “I hate you.” Kids say the darndest things. Mr. Baines, enduring a loveless marriage in the stoic British manner, is doubtless thinking the very same thing about the missus. 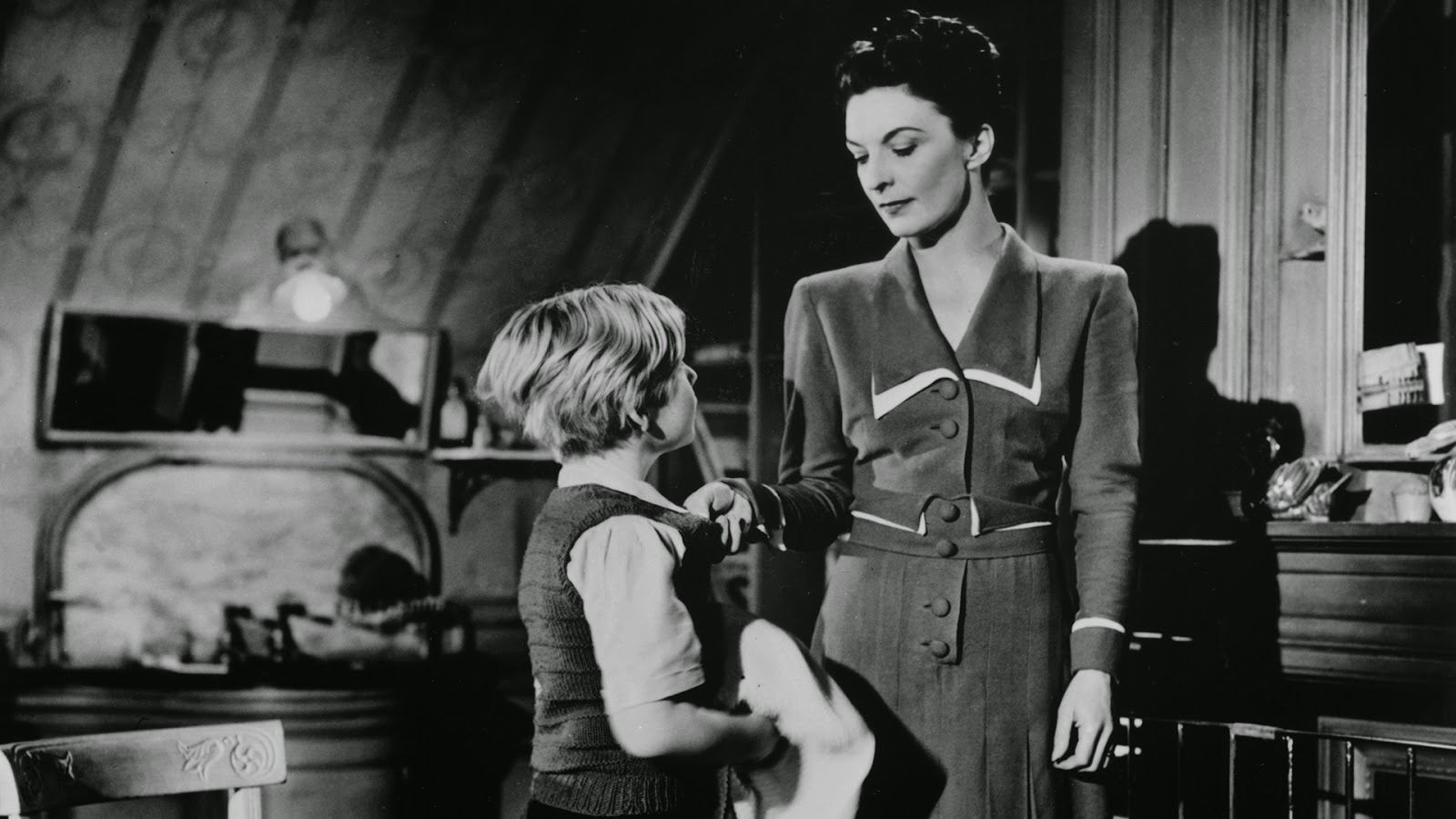 Despite Mrs. Baines’s interference, it’s all fun and games for Phile until he follows Baines to a clandestine meeting with the lovely young Julie (Michèle Morgan). Baines convinces Phile that Julie is his niece, but still suggests that the boy not mention anything about her to Mrs. Baines: “It will be our little secret.” Take note of the clever design in this scene: despite the fact that Baines and Phile are walking hand-in-hand, Reed (after an initial establishing shot from behind) never shows a single shot of the two of them together, only reverse shots of the towering Baines, and of tiny Phile looking up at his (soon to be “fallen”) idol. This is not a secret shared between friends, but one imposed by a powerful adult on a helpless child and the first of many lies Phile will be asked to tell in fairly short order; this “little secret” catapults Phile prematurely out of his childhood Eden and into the world of scheming adults. It is a world full of rules and codes of behavior and speech that Phile isn’t yet capable of understanding.

The performance of young Bobby Henrey is either the film’s greatest strength or its most glaring weakness, depending on how you interpret it. Henrey is profoundly non-professional even by child actor standards. He is awkward and stilted, alternately sweet and annoying, has terrible timing and constantly gets in the way. In other words, he’s a lot like a real 8-year-old boy, and Reed works some real magic with his naturalistic but limited star. In one of the film’s most memorable moments, Phile surprises his idol by imitating Mrs. Baines’s voice. Henrey’s entire body convulses in a peristaltic spasm, like a python trying to swallow a giant rat, as he squeezes out the high-pitched call of “Baines!” It’s a curious piece of acting (OK, let’s just call it “bad acting”), but Reed’s cut to Baines’s startled face sutures the scene together quite effectively. Like it or not, Henrey’s performance is, at the very least, a memorable one. 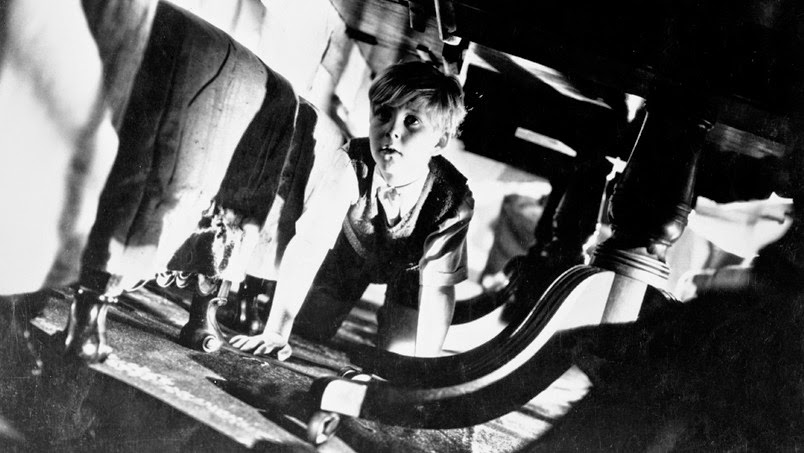 The first half of the film is by far the most successful, showing the genuine affection between the boy and the butler, but also foreshadowing the tragedy to come. In one scene Phile overhears Baines on the phone with Julie: “Oh, it makes no difference about the boy… Of course he doesn’t understand.” Baines cannot reciprocate Phile’s unconditional love because the life of an adult is just too complicated for that.

[Major spoiler alert ahead, if you still care about such things for a nearly 70-year-old movie.]

The second half of the film shifts into a less compelling detective story. Mrs. Baines falls to her death, and Phile, still not understanding what he sees of the adult world, fears that Baines did it. The police have the same suspicions, and much of the action of the final act involves their investigation of the crime scene. Phile tries in vain to be helpful, first by lying, later by telling the truth, failing completely with both tactics. Doesn’t anything make sense with these crazy adults?

“The Fallen Idol” is a beautifully photographed film.Cinematographer Georges Périnal (who previously worked for Michael Powell) indulges Reed’s penchant for tilted angles (not as extreme as in “The Third Man” but still quite striking) and camera flourishes with aplomb. The sprawling space of the embassy which Phile calls home appears either vast or claustrophobic in different scenes. Phile’s feverish run through the shadowy, rain-soaked nighttime streets, shot at long distance and from high angles, is a clear precursor to Harry Lime’s race through the sewers, and should put to rest any claim that “The Third Man” was really more of an Orson Welles film. Reed had a baroque style all his own.

Attention James Bond fans. Keep an eye out for a middle-aged Bernard Lee as a police detective. Stalwart Bond director Guy Hamilton (“Goldfinger,” “Diamonds are Forever,” “Live and Let Die”) also served as assistant director on “The Fallen Idol” as well as “The Third Man.” 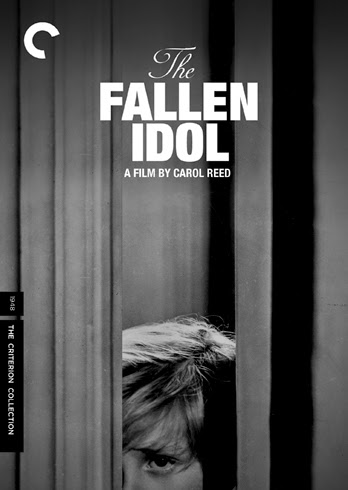 Video:
The film is presented in its original 1.33:1 aspect ratio. As with several of Criterion’s recent full screen releases, the image is pictureboxed which means some viewers will ses thin bars on the left and right-hand sides of the screen. However, most DVD players compensate by zooming in to display the full picture. The transfer is clean and bright, and the black and white contrast very sharp.

Extras:
“A Sense of Carol Reed” (24 min.) is a 2006 documentary shot for the Criterion release. Directors John Boorman and Guy Hamilton, among others, reminisce about Carol Reed’s life and career, and make an argument for a reevaluation of Reed as one of the great directors. Not that he's exactly unappreciated as is.

The DVD also includes an Illustrated Carol Reed filmography: posters and press book covers from all his film. The Original Press Book for “The Fallen Idol” is also available.

Film Value:
“The Fallen Idol” was the second of Carol Reed's post-war troika (starting with “Odd Man Out” and ending with “The Third Man”) that shifted his career into a new gear. It netted him his first Oscar nomination and marked the beginning of his most productive period. Reed was later showered with glory by the Academy for his musical “Oliver!” (1968), a pleasant and entertaining film that the Academy apparently preferred to Franco Zeffirelli’s brilliant “Romeo and Juliet” and an obscure little film that didn’t even get a Best Picture nomination, “2001: A Space Odyssey.”
Posted by Christopher Long at 7:53 PM