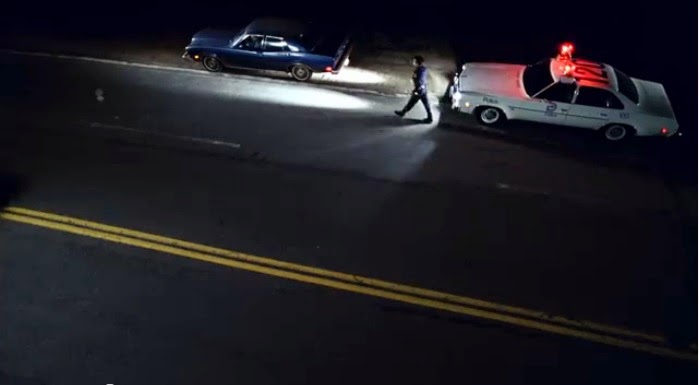 One of the greatest films ever made.

“The Thin Blue Line” has been justly lauded for its stylistic innovations, its giddy flaunting of the truth claims of direct cinema, and its searing indictment of a corrupt and incompetent judicial system. Yet the reason I have watched this film more than any other documentary, the reason I fall under its spell each and every time, is that is an eloquent ode to the importance of evidence. 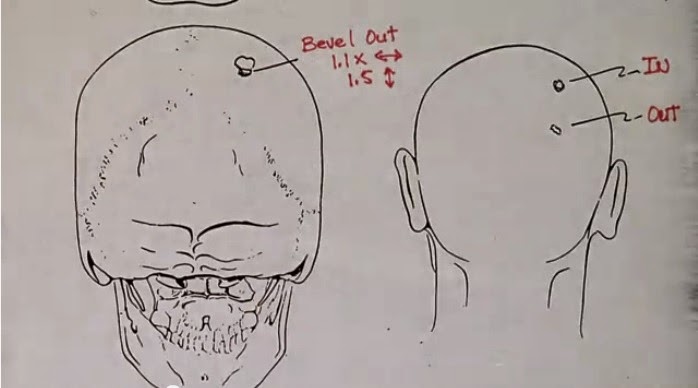 We are each a mass of cognitive biases, constantly misperceiving reality and then misremembering what we already misperceived in the first place, twisting it around to suit our needs. This has led many post-modernists to throw in the towel and assert that the truth is relative, but as director Errol Morris has stated time and again, that is utter bullshit. Truth is absolute; we simply do our best to avoid it, mostly because we don't much care, partly because we're so bad at identifying it. It may be elusive, it may be complex, but the truth is there. Whether we can ever get to it is another issue.

The key to cutting through the biases and all the other bullshit is evidence, the cold, hard facts that exist independently of our faulty perceptions. The evidence will set you free, sometimes from a metaphorical cognitive prison and sometimes from a literal brick-and-iron prison as in the case of Randall Dale Adams, cosmic victim of chance and human fallibility.

Adams was a bit of a drifter who made the mistake of drifting into Dallas for a few days; on one of those days (Nov 27, 1976) he ran out of gas on the side of the road. A teenager named David Harris offered him a ride and the two hung out for dinner and a drive-in movie before parting ways. Later that night Dallas police officer Robert Wood was shot and killed during a routine traffic stop. About a month later, Adams was charged with the murder, largely based on the testimony of Harris, and then convicted of the murder, largely based on the testimony of even more liars.

Twelve years later Adams was still in jail, a death sentence (he was three days from being electrocuted at one point) having been commuted to life, which is about the time a former filmmaker turned private investigator named Errol Morris found out about him. Morris was actually in town to investigate Dr. James Grigson, a psychiatrist proud of earning the nickname Dr. Death for the role he played as court expert in many capital punishment cases. Grigson had happily steered Morris in the direction of some of his greatest achievements on death row; there Morris met Adams and, after initially dismissing his protestations of innocence, began to investigate and found that the evidence didn't even remotely match the Dallas County legal system's version of events.

Morris, in the midst of a half-decade hiatus from filmmaking after the extraordinary career opening salvos of “Gates of Heaven” and “Vernon, Florida”, knew he had not only an immediate mission to complete but also a subject for his next movie. He unearthed ample evidence both discrediting the prosecution's case and pointing the guilty finger at David Harris; his investigation proved crucial in eventually setting Adams free, enough on its own to rate “The Thin Blue Line” as one of the most important films of all-time though it was not the screening of the film itself that played the pivotal role, rather the evidence Morris presented to authorities.

The movie that resulted provides evidence of another kind, of the delusions and fictions that rule our lives, and that certainly rule our judicial system. Morris's unblinking camera finds a judge who styles himself an upholder of the law just like his FBI agent father who was in on the Dillinger arrest, police investigators who just knew Adams was guilty because he showed no remorse for his crime, a prosecutor primarily interested in scoring another kill, and an array of unreliable witnesses with motives of their own. Chief among the latter group is Emily Miller who all but confesses her own lies on camera while presenting herself as a savvy do-gooder who likes to beat the police at their own game; her casual statement that crimes like this keep happening around her all the time and that she always gets involved is one of those “I don't know if I'm supposed to laugh or cry” moments so central to Morris's work.

Beyond the biases of the individuals involved, the film portrays a lunatic legal system utterly disinterested in guilt or innocence, looking only for “justice” at all costs. An officer has been murdered and someone must pay; someone, anyone, it's all good. All you have to is find the right person with the right story (if it needs to be coached out of them, no worries) and you have your verdict, all nice and official-like. Perhaps the most unnerving claim made in the film is by Adams's attorney Edith James who believes the main reason Dallas County pursued Adams so aggressively is that Harris was too young to get the death sentence even if found guilty, and where's the fun, I mean justice, in finding someone guilty without getting to fry him?

At the center of the insanity is Randall Adams with his piercing eyes, speaking in accusatory terms but with the distanced resignation of a man who still can't quite believe any of this is actually happening to him. This is the “Charlie Manson” and “Adolf Hitler” personality who would kill and kill again, according to the testimony of Dr. James Grigson whose degrees affirm his expertise and guarantee that his word will determine the fate of dozens, all nice and official-like. The real evidence was right there for everyone to see, of course, but nobody wanted or needed to so, pfft, it just didn't matter.

Laugh or cry? Morris can process both reactions simultaneously while embedding the absurdity of such a process and the people who operate it into the style of his film. Employing moody lighting and pulsing music from Phillip Glass, Morris imbues the proceedings with white-knuckle suspense and the feel of a classical noir with Adams as the haplessly doomed protagonist. The film also returns again and again to a reenactment of Officer Woods's murder with details changing each time: the make of the car, the license plate, the positioning of Woods's partner, the other cars driving by. It's an extraordinary device that illustrates the shifting nature of memory and the unreliability of eyewitness testimony, yet never deviates from a few provable truths: the gun, the murder, and the milkshake. Yes, the milkshake, look it up.

Let's add another layer of delusion. Putting the AS(s) in AMPAS, Academy voters decided this critically praised, groundbreaking film (that freed an innocent man!) did not even count as a real documentary because of its use of reenactments and other fictional techniques which meant it wasn't literal truth like exemplars from the field such as “Nanook of the North” (do I need a sarcasm font for that?) Laugh or cry? Let's laugh because that battle has mostly been won by the sane people over the past quarter century with definitions of the documentary opening up to include, well, the kinds of films that were always there from the very start. They just couldn't deny the evidence anymore so, hey, that's progress.

“The Thin Blue Line” is tense, riveting, and sincerely and convincingly angry in its depiction of human greed and stupidity. This is a rage against the machine, and if it didn't fix the legal system, did I mention that it got an innocent man set free? That'll do. 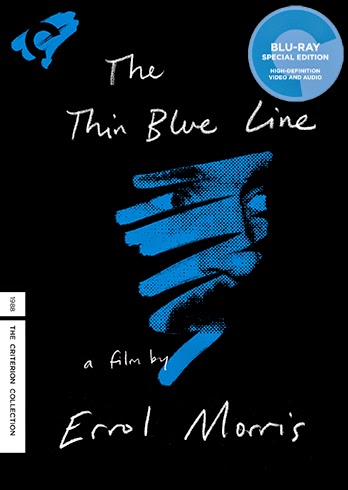 Video:
The film is presented in its original 1.78:1 aspect ratio. The high-def transfer brings many of the details (close-ups of newspaper articles and maps, for example) into sharp resolution and with a rich color palette that emphasizes the amount of conscious design that went into the film. Grain is thick and we can see a lot of detail in some of the darker scenes. No complaints.

Audio:
The DTS-HD Master Audio 2.0 track has two jobs: present clear dialogue and preserve Philip Glass's exquisite score. It succeeds at both even if the overall result isn't particularly dynamic. Optional English subtitles support the English dialogue: when relevant, the speaker's name is indicated in parentheses which might help since Morris never identifies anyone by name with on-screen titles.

Extras:
The primary extra Criterion has included is a new 41-minute interview with Errol Morris which kicks off with a discussion of his “crazy thwarted career” and the events that led up to the investigation that turned into “The Thin Blue Line.” I can listen to Morris talk documentary and philosophy all day long so even 41 minutes flew by and left me wanting more.

We also get a interview with documentarian Joshua Oppenheimer (2014, 14 min.) who speaks of his great appreciation for the film.

The disc also includes an interview segment from the Mar 22, 1989 episode of “Today's 'Close Up'” with Bryant Gumbel as host interviewing Morris, Adams, and Adams's lawyer Randy Schaffer.

Final Thoughts:
In short, one of the greatest films ever made. Maybe the greatest documentary. Got an innocent man freed from jail. And there's your winning shot.
Posted by Christopher Long at 7:40 PM