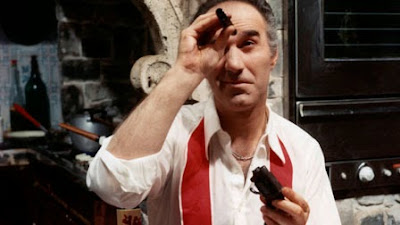 
Marco Ferreri’s films are completely insane but “Dillinger is Dead” (1969), while batshit crazy, is a classically constructed film in the old school sense. It follows a single character in a single location over the course of a single evening. Aristotle would have been proud.

Proud, yes, but confused as hell.

As is the case with Ferreri’s stark raving mad “Bye Bye Monkey” (1978), the best way to approach “Dillinger is Dead” is with a straightforward plot summary since that won't actually spoil anything. A gas mask designer (never named in the film, but called Glauco in the script) heads home after a boring day at work. His beautiful but slothful wife (Rolling Stones fan Anita Pallenberg) never gets out of bed, and his maid (Annie Girardot) is done working for the night (sort of) so he’s left on his own to kill time in this ancient pre-Internet era. 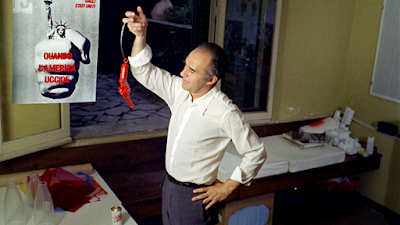 Glauco is played by the great Michel Piccoli who was passed around like a bong to most of the great European directors of the era (Melville, Godard, Varda, Demy, Clement, Buñuel, Costa-Gavras, even Mario Bava.) He turns in a marvelous, mostly silent, mostly solo performance. At first it seems like Glauco is just a bit stir crazy but as the evening wears on he regresses gradually into childhood. He clutches at the breasts of the women in his home movies, pretends to swim in the ocean on the screen and becomes obsessed with his special new toy. He cleans the gun like a military expert, reassembles it, points it at the mirror (the “You talkin’ to me?” is subtextual here), pretends to blow his brains out, and even paints it fire-engine red with white polka dots. 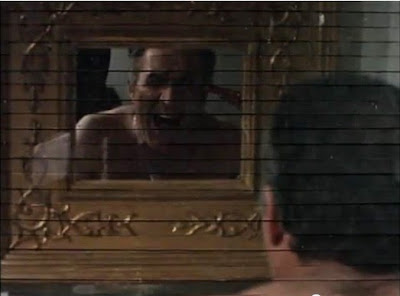 If you’re the sort to waste your time worrying about what movies mean, you can do so at your leisure here. The title suggests that a certain kind of machismo “is dead” and poor Glauco doesn’t quite know what to do with himself in a feminist late-60s world. Or maybe it’s a “Targets” style study of sudden psychological breakdown. Or just a total lark by crazy-ass Ferreri. Have at it, interpretation addicts.

The film’s effectiveness stems not from the why, but the what. Ferreri’s sometimes hand-held camera, awkward POV shots, haphazard zooms, and his less-than-immaculate compositions bring an amateurish intimacy to the proceedings. We hover somewhere right next to this strange, lonely man as he wanders through the house in something approaching real-time. There’s some method to his madness, some motivations for his constant shifts in focus, but we’re not privy to them. He eats. He watches TV. He paces around. And we watch, wondering if and when he is finally going to snap. Piccoli says that Ferreri kept him mostly in the dark, showing him only a 10-page script and telling him what to do each day on the set with little explanation. Ferreri wasn’t flying by the seat of his pants. He had a meticulous plan, but he also wanted to make sure his actors couldn’t screw anything up by psychologizing their roles. Mission accomplished.

“Dillinger is Dead” is surrealist in the most transgressive, violent manifestation of the term. The film strongly implies a sense of alienation in the modern world that can’t lead anywhere but total dysfunction. The status quo is untenable and the only way out is to opt all the way out, no matter what needs to be done. That doesn’t make Glauco a hero, but he is at least a perfect case study for Ferreri’s glowering, darkly humorous view of bourgeois society.

“Dillinger is Dead” was a surprise critical hit for Ferreri whose eccentric work was not always popular with the cognoscenti. It kicked off a brief period when Ferreri was in favor, one that lasted up until “La bouffe” (1973.) 1974 brought the off-the-rails sort-of-Western “Don’t Touch the White Woman” (also with Piccoli) and with an exception or two Ferreri soon fell off the critical radar. Until recently, his films were largely unavailable in America but a few have begun to trickle out on DVD. Last year witnessed the American theatrical re-release of “Dillinger is Dead” by Rialto Pictures, which will, we can hope, pave the way for the release of the bulk of the prolific director’s work in Region 1. 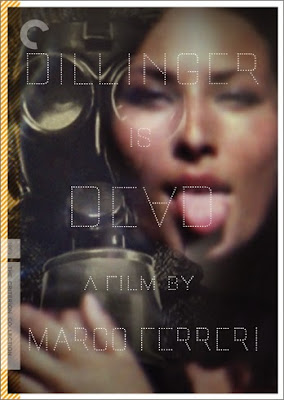 Video:
The film is presented in its original 1.66:1 aspect ratio. The progressive, anamorphic transfer was approved by director of photography Mario Vulpani. It’s very solid work that perhaps isn’t quite on par with the very best Criterion transfers, but is still more than satisfactory. The colors are bright (Glauco’s red apron – good grief!) and the image resolution is sharp. No complaints.


Audio:
The DVD is presented in Dolby Digital Mono. The sound mix isn’t too complex and it all sounds clean and sharp. There are a lot of pop songs and TV broadcasts played throughout the film and they are all well-presented. Optional English subtitles support the Italian audio.

Extras:
Since “Dillinger is Dead” is the first Marco Ferreri film in the Criterion Collection, we could have hoped for more extras. The three that are included are interesting but not particularly deep.

The disc includes newly recorded (2009) interviews with Michel Piccoli (13 min.) and film historian Adriano Aprà (20 min.) Piccoli speaks of his first meeting with Ferreri and about their close friendship. Aprà’s interview provides a perspective on Ferreri’s career and analyzes “Dillinger” in some detail. Aprà appears on TV in the film.

The only other substantive extra is a 1997 round-table discussion (13 min.) recorded weeks after Ferreri’s death. The feature includes clips of Ferreri speaking shortly before his death and excerpts from the discussion by his friends Bernardo Bertolucci, Francesco Rosi, and film historian Aldo Tassone. The excerpts are taken from the May 14, 1997 episode of “Le circle de minuit.” The show is hosted by Laure Adler and directed by Pierre Desfons.

I wish modern trailers could be more like the Trailer included here. It doesn’t tell you a damn thing about the movie and shows plenty of cleavage. That’s quality.

Final Thoughts:
“Dillinger is Dead” is a one-of-a-kind experience. I suspect that’s true of every Marco Ferreri film though I haven’t seen enough to be an expert on the subject. Though it appears downright amateurish at times, it’s a finely calibrated exercise in inspired lunacy that displays a formal mastery not often associated with Ferreri’s work. The scenes of Glauco bathed in the light of the projector, literally becoming part of the home movies flickering across the wall, are pretty damned brilliant. And so is the movie.


The modest collection of Extras is a disappointment but I’m not sure how much archival material exists about Marco Ferreri. In any case, the Criterion release of “Dillinger is Dead” is strongly recommended.
Posted by Christopher Long at 11:10 PM