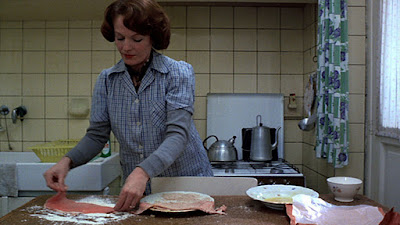 (This review of Chantal Akerman's masterpiece was written for the 2009 DVD release by the Criterion Collection. Sections below have been updated to discuss the 2017 Blu-ray re-release of the film.)


I have to dispel the rumor that Chantal Akerman's brilliant "Jeanne Dielman, 23 Quai du Commerce, 1080 Bruxelles" (1975) consists of three hours of a woman doing housework. That's nonsense. It's three hours and twenty minutes. And she also goes shopping.

Each room in Jeanne's cramped Belgian apartment is filmed from one or two fixed camera set-ups, always the same ones (at least for the first half of the movie; it opens up a bit later on). The camera, placed about waist high, never moves and the action in each shot is filmed in real time with no analytical editing. When Jeanne prepares dinner, we watch the entire process from when she spreads flour on the table, whips the eggs, breads the cutlets and so on.

In some ways, “Jeanne Dielman” feels like the first spycam movie ever made. Usually Jeanne is in the shot but sometimes she wanders in and out as she completes her chores. The camera doesn't budge. It's almost as if the cameras in each room are rolling 24/7 and simply waiting for Jeanne to enter their field of vision, and for viewers to switch channels to watch the next room. When Jeanne's not there, we stare at the sink or the tureen on the dining room table or the bedroom closet. The film provides an uncomfortably intimate exploration of this tiny, titular space that almost completely defines Jeanne Dielman's claustrophobic world. 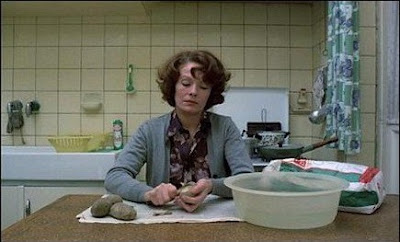 "Jeanne Dielman" traces three days in the life of its title character, a widow and homemaker who receives male “clients" once a day to pay the bills. Each day is rigidly segmented, a series of domestic tasks and rituals performed at the same time every day, a comfortable tedium which protects Jeanne from the horror of having free time to contemplate her life. At least until something goes wrong on the second day and disrupts her delicate, hard-earned stasis. Then she leaves the lid off the tureen, fumbles with the silverware, overcooks the potatoes, and wakes up a little earlier than usual. Chaos theory style, these minor variations eventually lead to major consequences, and the potential energy built up by three-plus hours of this rigorously structured study of a body (often not) in motion erupts into an unexpectedly kinetic final sequence.

Chantal Akerman was only 25 when she made "Jeanne Dielman." It's hard to believe someone so young could have such a clear and unique vision and the ability to realize it so well, but it's best not to fall into the trap of lauding her as a solitary genius. She had many collaborators on this film, crewed mostly by women, chief among them cinematographer Babette Mangolte and leading actress Delphine Seyrig.

Mangolte teamed up with Akerman to produce this "spycam" film, adapting a shooting style to fit the restricted space of the real apartment the film was shot in (some scenes were re-staged in a studio, but this footage wasn't used). Unable to knock out walls or remove ceilings, Mangolte and Akerman devised a way to cover each room with just a few set-ups and still create an asphyxiating immediacy. 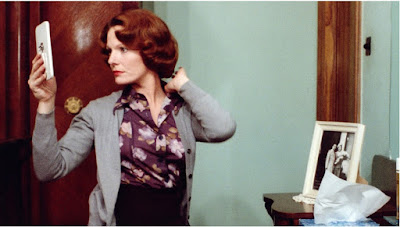 Delphine Seyrig was a huge star by the time she agreed to work with this young and relatively unknown director. There was little chance for money or glory in the role, but she believed in the project. Jeanne Dielman in her dowdy sweaters is almost the polar opposite of the glamorous fashion icon Seyrig played in "Last Year at Marienbad" (1961), but in both films Seyrig is asked to "behave" more than she is to act. In "Marienbad" she was mostly a shape situated in her environment. Jeanne Dielman is a relatively expressionless woman, a robo-mom who performs her chores mechanically and, at least on the first go round, with total efficiency. It's hard to imagine that Seyrig had much fun with the role (and we see evidence of this on one of the DVD features) but she inhabits the body of Jeanne Dielman with a stolid blankness that would be anathema to many actresses. By gradual accumulation and uncomfortably close observation, Jeanne becomes one of the most tangible presences the cinema has ever witnessed. For my money, she's the greatest film character of all-time.

"Jeanne Dielman" is a transfixing experience that inspires a kind of solemn awe on an initial viewing, but upon reflection it also yields its fair share of humor. There's that painfully awkward scene where Jeanne wanders around the apartment with her pot of overcooked potatoes and winds up in the bathroom for some reason. And her wimpy, dependent son (Jan Decorte) who barely speaks and never once says thank you, the little bastard, when mom clears off each course. And the most enduring image of all, both creepy and funny, is that of the frugal Jeanne obsessively clicking the lights on and off as she exits one room and enters another. Has anyone counted the number of times we see her flick a light switch? Dozens for sure, possibly in the hundreds.

Did I mention the baby scene? No? Well let's just say it's not funny at all. In fact it's one of the saddest, most gut-wrenching scenes ever put on film. Just another of many remarkable moments from a remarkable film.

Spycams indulge voyeuristic impulses, of course. "Jeanne Dielman" is certainly not intended to appeal to prurient interests. Even a scene in which Jeanne bathes (waist-level camera unmoving, of course) isn't the least bit erotic. But the film does provide viewers the opportunity to see images (or "images between the images" in Akerman's terms) that they would not otherwise get a chance to see. More specifically, the film provides images of the domestic space previously deemed unfit for cinematic treatment, at least in such detail and clarity. Akerman relocates the traditional epic to the kitchen, the bedroom, and the dining room, turning the camera on a world known to hundreds of millions of women throughout the world but seldom the subject of cinema. I'd say that's the greatest accomplishment of "Jeanne Dielman," but there's a long list of accomplishments to choose from.

"Jeanne Dielman" is on the short list of films that changed the way I understood film. Every bit as much as Kubrick's “2001,” this domestic odyssey is the ultimate trip. 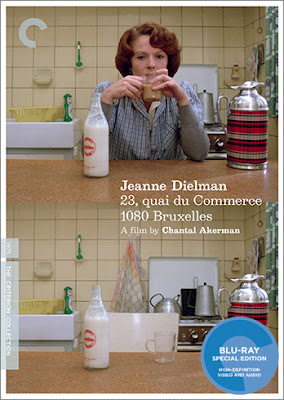 Video:
The film is presented in a 1.66:1 widescreen (anamorphic) ratio. The progressive transfer was digitally restored under Akerman's supervision. The grainy, textured image looks great. Sharp contrast, everything you expect from Criterion. Except that it's not high-def. But maybe someday soon...


Update for 2017 Blu-ray release: ...and maybe eight years isn't soon, but now it's here in glorious Blu-ray. Sure, sure, the jokes are easy. Man, you can really see Jeanne work that veal cutlet now! Watch those potatoes boil! But one of the greatest films ever made deserves the best presentation possible, and this high-def upgrade from Criterion renders 23, quai du Commerce, 1080 Bruxelles in vivid detail. From the Criterion booklet, this 1080p transfer is sourced from a “new 2K digital restoration” and was “supervised by director Chantal Akerman and cinematographer Babette Mangolte.” In addition to the improved detail evident throughout, the colors look a bit warmer overall than the prior SD transfer. The frame also shows more a bit more information around the edges – more of the room is visible on each side of the frame. You see just a smidge more of the cabinets overhead, etc. All in all, it looks pretty great.

Update for 2017 Blu-ray release: I sure wasn't too wordy when I wrote this before. That's because the sound design on "Jeanne Dielman" is pretty spare and straightforward. This linear PCM mono track is still a welcome improvement even if said improvement isn't particularly noticeable.

Update for 2017 Blu-ray release: Criterion has imported all of the extras, including the insert booklet, from the 2009 release. The only difference is that they are now rendered in high-def, and are all included on a single Blu-ray rather than on the two discs from before.

"Autour de ‘Jeanne Dielman'" (69 min.) is the best on-set feature I have ever seen. Filmed by actor Sami Frey, this feature shows Chantal Akerman and Delphine Seyrig at work on set, and demonstrates the degree to which collaboration can also be a battle of wills. Seyrig struggles to understand what Akerman wants while Akerman strives to communicate as little as possible. Just enough to give the actress what she needs but not so much that she runs the risk of introducing too much psychology into the project. The back-and-forth conversations between them are fascinating. Seyrig is frustrated but always cordial. Akerman obviously has a crystal clear vision in her mind of what she wants, but some difficulty (and reluctance) in verbalizing it. It's an amazing feature, and deserves to be a staple on film school curricula.

"Saute ma ville" (1968) is Akerman's first short film. The 18-year-old Akerman stars as (does this sound familiar?) a woman in a kitchen who tends to a few chores and quickly falls apart. This is much more playful than "Jeanne Dielman" and has a lovely soundtrack which consists of (I presume) Akerman humming. It's wonderful to have an opportunity to see the first film by such a great director.

"Chantal Akerman on Filmmaking" is excerpted from a 1997 episode of "Cinéma, de notre temps" in which Akerman directs an episode about herself. It is basically a monologue in which she shares some fairly personal reflections on her craft.

A brief interview with Akerman and Seyrig is excerpted from the February 15, 1976 episode of "Les rendez-vous du dimanche" (7 min.)

Final Thoughts:
Chantal Akerman is a much celebrated figure in cinephilic and academic circles, but largely unknown even to many fans of Francophone cinema. Criterion's release of "Jeanne Dielman" will, I hope, begin to remedy the situation. "Jeanne Dielman" is indisputably one of the greatest and most important films of the past half century. Though it is probably Akerman's greatest achievement, it's hardly the only highlight on her resume. "Je, tu, il, elle" (1974) is an intensely personal film that can be just as harrowing as "Jeanne Dielman." "News From Home" (1977) and "From The East" (1993) are exceptional as well. And “La chambre” (1972). And “Hotel Monterey” (1972). Well, you get the picture.

Update for 2017 Blu-ray release: And now Chantal Akerman is gone, and her loss still stings nearly two years later. I wrote "probably" before just to emphasize that Akerman made many great films, but I am confident that "Jeanne Dielman" is her masterpiece, as well as one of the masterpieces of world cinema. In fact, I wouldn't argue too strongly with anyone who claimed it was the greatest film ever made. And that makes this Blu-ray update, even without any new features, one of the most significant and welcome home theater releases of 2017.
Posted by Christopher Long at 10:30 AM