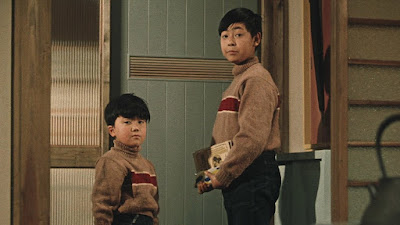 
As an adult who remains baffled by the ubiquitous small talk that comprises most social interactions, I can empathize strongly with the young protagonists of Yasujiro Ozu's “Good Morning” (1959). After thirteen-year-old Minoru and seven-year-old Isamu brattily demand their parents buy a television so they can watch sumo wrestling and baseball, their father (Ozu stalwart Chishu Ryu) scolds them for their sassy backtalk. A petulant Minoru retorts that adults spend all their time saying stupid things like “Good morning” (and “No, you can't have a TV!”) and enlists his little brother in a vow of total silence until they get their television and, perhaps, until the adults understand just how absurd their constant prattle sounds.

The boys' refusal to observe the expected social niceties and to comply with the inherent power structure between generations sets off a chain reaction in their tiny suburban neighborhood. Gossipy housewives, who, like everyone, consider themselves the main characters in the story, take the boys' rudeness as a personal rebuke, and more specifically as a sign of their parents' haughtiness. Their mother thinks she's better than us? Well, we'll show her!

The neighborhood's delicate social structure shakes, but never comes particularly close to collapsing in one this lightly comic offering from Ozu. And the boys' blinkered but sincere perspective ultimately underscores the significance of the insignificant interactions they protest. The content may be superficial, but the form of a “Good morning” or “This weather sure is crazy” is essential to enable humans to live together in relative harmony. Sometimes it even opens the door for far more intimate exchanges.

I point all of this out mostly because I wanted to become one of the very few critics ever to make it to the fourth paragraph of a review of “Good Morning” without talking about farts. Fart jokes may not be the first thing that spring to mind when you think of the director of “Tokyo Story” (1953) and “An Autumn Afternoon” (1962) but farts (huh huh, he said “but farts”) grease the social skids as surely as any other form of communication in this film. The boys' ability to fart on command (indicating by peppery musical toots on the soundtrack) assures their place in the playground pecking order, and at least one of their fathers takes great pride in his firm and resonant tuba-farts that repeatedly trick his poor wife into thinking he's calling for her.

It's tempting, at least for me, to think that Ozu is suggesting that no matter what orifice we use to communicate we're really all just talking out our asses, but he's much more appreciative of the nuances of daily social interaction than I am. Ozu and co-writer Kogo Noda have an uncanny knack for depicting complex, dynamic characters in just a few seconds of screentime; even the shameless gossips aren't allowed to turn into one-dimensional shrews. People are cranky when they think they've been treated unfairly, sunny when they're getting a fair shake, confident in private, and more tentative in less-controlled social situations. Even a romantic subplot between an unemployed teacher and his neighbor feels fully realized despite only being glimpsed intermittently, and pays off in a final scene which is a gentle but full-blast ode to the beauty and vitality of small talk.

Ozu veterans might except Chishu Ryu to dominate the film, but Ozu gives his young stars ample room to shine, and wisely returns over and over to the little miracle he discovered in young Masahiko Shimazu, who plays Isamu. His chubby face with its awkwardly proportioned features plays like a live-action cartoon, and his exaggerated gestures echo the perfect calibration of a silent comedian. And he can fart like a champ.

Periodic cuts to meticulously composed shots of the neighborhood's modest buildings, usually arranged in sharp diagonals, remind the viewer that it doesn't take a big (or naked) city to generate eight million stories. The film even ends by spotlighting a previously minor character, the one boy whose flailing attempts at flatulence end in disappointment, not to mention extra laundry for his confused and irritated mother. As the boy sits there brokenhearted, Ozu gleefully cuts to one final visual joke, a clothesline full of underwear just flapping away in the cool breeze. 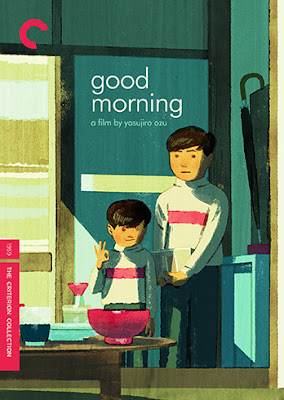 Video:
Criterion released “Good Morning” on a bare-bones DVD way back in another century (Aug 22, 2000), and while I don't have that one for a point of reference, most reports describe the old transfer as one of their weaker ones.

Never fear. This 1080p upgrade, sourced from a 4K digital restoration, renders the film in sharp detail with a bright but never garish color palette. Close-ups really show off the detail in this high-def transfer which should make fans quite happy.

Audio:
The linear PCM mono track is sharp, like just about every Criterion release. Toshiro Mayuzumi's jaunty score can't help but remind listeners of Jacques Tati, and it sounds quite good on this lossless audio. Optional English subtitles support the Japanese dialogue.

Extras:
Cinephiles recognize David Bordwell as one of the most insightful film scholars still writing today. Bordwell helped to popularize the application of Vladmir Propp's narrative analysis in film studies and is renowned for his close stylistic breakdowns of art-house enigmas and Hong Kong action films. In a new 2017 interview (19 min.) recorded for the Criterion Collection, David Bordwell finally gets to talk about farts. Few could be more eloquent.

Except maybe David Cairns who aptly describes “Good Morning” as “Ozu's fartiest film” in “Transcendental Style and Flatulence” (17 min.) Cairns also touches on a few non-flatulent topics, as does Bordwell.

Criterion has also included a high-def upgrade of Ozu's 1932 silent film “I Was Born, But...” (90 min.), also included on the “Silent Ozu” set from what appears now to be Criterion's defunct Eclipse line. “Good Morning” is often described as a remake of “I Was Born, But..” as the earlier film also features two children who go on a strike (hunger strike this time) to express their frustration with the adult world. However, the two films are considerably different, with “Good Morning” being the much lighter of the two.

The disc also includes the 14 surviving minutes of Ozu's 1929 silent film “A Straightforward Boy.” This is an odd semi-comedy in which the title boy gets kidnapped, but turns the tables on his shady kidnapper – it ends with children pursuing the kidnapper, eager to get the same treatment he gave to the title boy which is... kinda weird.

The slim fold-out insert booklet includes an essay by critic Jonathan Rosenbaum, who also talks about farts, but not as extensively as in the video features on the disc.

Final Thoughts:
It's easy to dismiss “Good Morning” as a slight entry in the Ozu canon, but even the gentlest of comedies can still provide profound insights. The film convincingly captures the daily rhythms of a small neighborhood, and penetrates deeply to see what makes it work and what threatened to tear it all apart at the seams. With the inclusion of “I Was Born, But...” as an extra, this is a significant upgrade over the old SD release and a must-own for Ozu fans.
Posted by Christopher Long at 8:23 PM