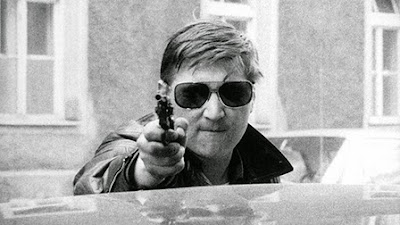 As a friend recently reminded me, all Fassbinder films qualify as Early Fassbinder. The absurdly prolific director left behind forty feature films in just a thirteen year career, providing critics the opportunity to slice them up into very sizable phases that show clear developments both in terms of artistic vision and production methods. But Rainer Werner Fassbinder was dead by age 37 in 1982, and considering the unabated freight train momentum of his career at the time, we can only conclude that he was just getting started.

So let's think of this new five film boxed set from Criterion's Eclipse Collection as Earliest Fassbinder. As infinite as he now seems, he started somewhere and that start was, as was true for many of his role models in the French New Wave and his peers in the New German Cinema, with Hollywood. “Love is Colder than Death” (1969) is an aggressive deconstruction of classic crime genre tropes. All the standard (it's fair to call them cliched) elements are present. Two-bit pimp Franz (Fassbinder) is recruited by a blankly ominous Syndicate for reasons unknown. Remorseless gangster Bruno (Ulli Lommel), looking like he stumbled out of a Depression-era-inflected Jean-Pierre Melville film, shadows Franz and his prostitute girlfriend Joanna (Hanna Schygulla, already luminous even amidst the grubbiness). They wear cool hats and sunglasses, smoke cigarettes, and play with guns, just like the tough guys in the movies. A dispirited love triangle ensnares them all on the way to a predictably bleak ending. “Love” is surely one of the whitest films ever made. Flouting conventional wisdom, Fassbinder stages scene after scene against a blank white wall as characters shuffle back and forth and almost disappear into the blinding haze; his compositions are off-kilter too, leaving uninterrupted swaths of blank white space on one half of the screen. He also tests audience patience by draining his cast's performances to the point of total enervation. They stare into the camera, posing like mannequins. It's not surprising when characters collapse or lounge on the ground; it's a wonder they have the energy to stand at all. As the Dude would later observe, nihilism is indeed exhausting.

The film was, to say the least, not well-received, but I think it's a spectacular debut that provides one scene that perfectly sums up Earliest Fassbinder. As one character's body lies in a road, another man tersely states, “He's dead. Let's get him out of the way.” Once you cease to be of immediate use, you're just a nuisance.

Fassbinder established a familiar pattern that he would torment into every possible permutation over a frenetic year and a half which produced ten features. In all of them, he worked with the members of his Antiteater (anti-theater) collective in Munich, a troupe of particularly game performers willing to help him realize his obsessive, bitter vision. From the very first film, it's clear that Fassbinder's world is defined by a series of grim personal transactions. His characters cling to each other fiercely not out of love (it's colder than death, after all), but out of desperate need. Every relationship is a power play in which the person with the upper hand is more than willing to use and abuse the power inherent in being the one who cares less.


“Katzelmacher” (1969) was shot in just over a week and provides the writer-director with a larger collection of personalities to send careening against each other. A group of self-absorbed twenty-somethings in a rundown Munich neighborhood lounge around and gossip about each other as they reach (with minimal possible effort) for sex and money. A Greek laborer (Fassbinder) moves in and disrupts the torporous balance. The vicious bastards give free rein to their prejudices, heaping abuse and innuendo on poor Yorgos to distract them from their own colossal failure. Marie (Schygulla again, and as amazing as ever) is the only who shows him the slightest kindness that isn't motivated entirely by self-interest, but you won't be surprised that it proves insufficient against the massed forces of moral decay.

“Gods of the Plague” (1969), filmed over a relatively elongated five-week period, gave Fassbinder a second crack at his beloved Hollywood crime flicks. Franz Walsch (Harry Baer, playing a character who shares the pseudonym Fassbinder used as film editor) gets out of jail and quickly reverts to his old ways. There's more posing, more ennui, more stylish fedoras, but the otherwise morbid film is spiced up by occasional bursts of playfulness, most of which involve actor Gunther Kaufmann who plays a stone killer known as Gorilla. When Gorilla shows up unannounced, the indulgently sullen Franz cracks a broad smile and the movie sidetracks to a bizarre interlude in which Gorilla leaps giddily into a loft full of hay and wrestles with a sheep. The seemingly incongruous tenderness makes more sense when you know that Fassbinder was madly in love with Kaufmann at the time.


“The American Soldier” (1970) effectively completes a crime trilogy with Karl Scheydt as Ricky, a German-American GI who returns from Vietnam to a life as a hitman. He gets several girlfriends this time (including Schygulla, of course, and future filmmaker Margarethe Von Trotta who also co-starred in “Gods”) as the film settles into the simultaneously comfortable and alienating rhythm of aimless lethargy that had become so quintessentially Fassbinder in such a brief period of time. Fassbinder sprinkles in character names like Lang, Fuller, and Murnau as reminders of his still rabid cinephilia, but seems to be cruising in overly familiar territory. At least until the final shot, a slow-motion dance macabre that defies description. It is one of the most audacious things I have ever seen and I love it unconditionally.

In these four black-and-white exercises, Fassbinder had clearly expressed his view of humanity. You will be betrayed by people. You will be betrayed by the people you betray, even the ones you unwittingly betrayed by simply not meeting their unstated expectations. Money isn't the final world, but it has a voice in every exchange and is the motivation for much of the betrayal. There's no point in complaining about the state of things, and hiding from the reality is pure cowardice. Live with it and live it fully. As a dying gangster says, “Life is very precious, even right now.”


“Beware of a Holy Whore” (1970) represented a change of sorts, and not just because it's the only film in this set (thought not the first Fassbinder film) shot in color. Rather than using other Hollywood movies as a template and distancing device, Fassbinder transforms a recent personal trauma into a black comedy. He (and most of his cast) had a nightmarish experience shooting “Whity” (1970), in no small part because of his deteriorating (non)relationship with Gunther Kauffman. “Holy Whore” is a recapitulation of the shared torture and a satirical study of the process and peril of working in a creative collective.

Fassbinder thrived on interpersonal friction, but clearly felt things had gone too far, or at least that they had brought him to a point of exhaustion and a chance to pause and reflect. The result is perhaps the most polished film in the set, one with its share of self-lampooning flourishes as a fictional film shoot is sabotaged by a childish, abusive director (Lou Castel), disinterested actors, and financial troubles. Fassbinder also got to work with French New Wave icon Eddie Constantine, which had to be a wish fulfilled.

After “Holy Whore,” Fassbinder was finally ready to rest. Well, OK, he filmed “Pioneers of Ingolstadt” next, and he directed a few plays on stage and on radio, and he traveled the festival circuit as audiences tried to catch up with his Big Bang arrival, and he also got married. But aside from that, he rested, going nearly nine months between shoots. With a hearty second wind, he knocked off “The Merchant of Four Seasons” (1971) in just 11 days and it was only a total freaking masterpiece that kicked off the next period of his career, which we'll call Earliest Early Fassbinder and would lead directly into the brilliant “The Bitter Tears of Petra Von Kant” (1972), “Effie Briest” (1972), “World on a Wire” (1973) and, well, the rest of Early Fassbinder.

It was a lot, but it wasn't enough. We were robbed of Late Fassbinder, and there's nothing that will ever set that right.

Video:
Each of the films in this set were released individually on DVD by Wellspring in 2002 and 2003. AS far as I can tell, there's no difference in quality between the Wellspring transfers and the Eclipse set. They're probably from the same source. This is both good and bad.

Both “Love” and “Katzelmacher” have many scenes shot against white backgrounds, and that's always a challenge to render digitally. Sometimes the characters seem to stand out a bit unnaturally, almost limned like they were effects dropped-in later, or blend into the white background. This can make for a noisy image, but it can't really be helped, not on a “budget” transfer anyway. Aside from the very, very white scenes, the image quality on the transfer is generally pretty strong with rich contrasts in the black-and-white photography. The color in “Beware of Holy Whore” also looks quite appealing.

Audio:
The Dolby Digital Mono tracks are crisp if not particularly dynamic. I didn't get a chance to mention the musical scores by Peer Raben, one of Fassbinder's crucial collaborators. Raben's original music and selection of pop songs create unique and evocative textures that are integral to the films, and the audio tracks do a solid job of preserving his work.

Extras:
As with most Eclipse releases, there are no extras. We do, however, get the usual essays (a slim insert booklet on “Love” and single pages one the other discs) by Michael Koresky, who does a fantastic job both of introducing Fassbinder and contextualizing the individual films. Koresky is consistently concise and insightful in these Eclipse essays, and always provides a good “frill” on these no-frills releases.

Set Value:
Earliest Fassbinder doesn't get as much credit as it deserves. “Love is Colder Than Death” is a remarkable debut, and “Katzelmacher” is genuinely stunning in its finest moments. “Beware of A Holy Whore” is riveting from start to finish, even when it's boring. All of the films provide evidence of a filmmaker who arrived with an instantly recognizable sensibility and a clear, willful vision. I can't quite say Fassbinder arrived fully-formed, but he arrived at full speed and never really slowed down as he traced one of the most memorable, and far too brief, trajectories in the history of cinema.

It's a shame these films weren't given the high-def treatment, and there's no reason for anyone who owns the Wellspring releases to double dip. But this set contains a highly concentrated dose of pure Fassbinder. And just think, it only represents half of the output from his first year and a half as a filmmaker.

Posted by Christopher Long at 10:46 PM