The Merchant of Four Seasons 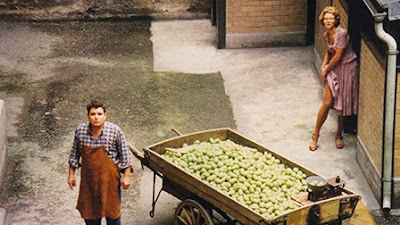 
I resist the notion that Fassbinder's first eleven feature films (all shot and released from 1969-1971) served merely as an apprenticeship. Among this furiously produced lot are brilliant works like “Love is Colder Than Death” (1969) and“Katzelmacher” (1969) and, oh my, the final scene of “The American Soldier” (1970) is as wickedly corrosive as anything Fassbinder would ever put on film.

But there's no doubt that “The Merchant of Four Seasons” (1971) represented a coming-out party, not only for Fassbinder but also for the emergent movement that would come to be known as New German Cinema. The major shift is in scale. Fassbinder's earliest films felt like documentaries of his very intimate relationships with the actors of his Anti-Theatre group, one of the most memorable (and memorably exploited) troupes the cinema has ever witnessed.

The gang is all back in this film but “Merchant” doesn't have the same hermetic feel as the earlier films. As anyone who has read about Fassbinder's work knows, the director had recently discovered the melodramas of Douglas Sirk at a German retrospective and experienced a personal epiphany. If he had previously been interested in “just” filming his theatrical work now his grandiose scheme was to shoot full-blown Hollywood films in Germany (mostly Munich for now) though still on a modest budget and at his usual furious pace; “Merchant” was filmed in just eleven days in August of 1971 and Fassbinder didn't let a minor inconvenience like his marriage to Ingrid Caven the same month keep him from reporting to work every day.

If “Merchant” was to be more traditionally linked to a cinematic heritage (rather than self-consciously deconstructing Hollywood genres) then the characters in the film would also be more overtly representative of their society. In the opening, Hans Epp (Hans Hirschmuller) returns from service in the Foreign Legion to a brutal dismissal from a contemptuous mother who clearly didn't miss him while he was gone. In the next scene, Hans has already embarked on one of the few careers immediately open to him in 1950's Germany (it's easy for non-German viewers to miss that the film is set slightly in the past), hawking fresh produce in the dusty back courtyards of Munich. Hans's journey will be a grim one, but Fassbinder finds a moment of beauty in this potentially deadening job as Hans sings out his sales pitch to any housewives within listening range, “Fresh pears! Fresh pears! Only 2.40 a pound!” This lilting lyric has stuck with me ever since I first saw the movie more than a decade ago. 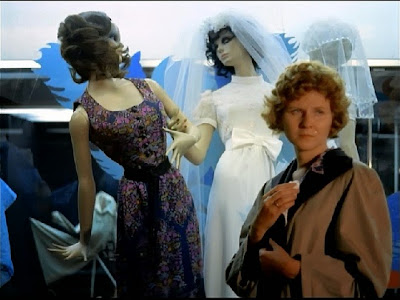 But this moment of beauty is transient, cut short by the watchful eye of Hans's wife Irmgard (Irm Hermann) who glowers jealously when a woman in a top story window calls out for a delivery. This will be a film about constant surveillance, characters always trying but failing to escape from observation by their family members, neighbors and employers. The camera (under the supervision of cinematographer Dietrich Lohmann) also maintains a constant vigil, operating more self-consciously than in most of Fassbinder's previous work, sometimes situating characters through frames within frames, other times prowling menacingly up and down each side of a table, carefully tracking the behavior of each person seated there.

At first, the skinny, bespectacled Irmgard with her angry pinched glare seems like the definition of a shrewish wife and Hans just a poor henpecked bastard, but the characters in “Merchant” vacillate, almost without warning, between behavioral poles. Irmgard has reason not only to be suspicious but fearful as Hans is bitter and self-pitying; he comes home drunk and beats her while their young daughter Renate (Andrea Schober) tries helplessly to stop the fight. Irmgard flees to the protection of Hans's family (including much of the Fassbinder troupe, notably Kurt Raab and Hanna Schygulla) and shrieks in terror when her bull-in-a-china-shop husband barrels into the room and begs her to return. Yet as soon as he reveals his temper to everyone in the room a smug Irmgard very calmly picks up the phone and calls her lawyer, confident that she now has the leverage she needs to name her terms in a divorce.

If there's an opportunity to take the upper hand in a situation, Fassbinder's characters usually do so, or at least fail in the effort. The writer-director had a decidedly transactional view of relationships, a morbid assessment underscored by the emphasis he places on the tracking of money in so many of his films. Everyone is assessing how much another person is worth to them, and whether a minor personal sacrifice today can pay dividends down the road. 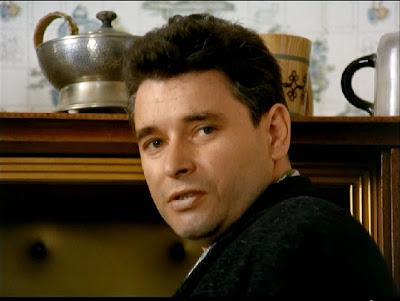 I won't deny that's a pessimistic worldview, but Fassbinder had an enigmatic ability to make every character potentially sympathetic. Not in a touchy-feely, sentimental way but from a position of solidarity. We are all sub-optimal designs and if you don't share the particular weaknesses of the characters in “Merchant” you can perhaps understand their fear of vulnerability, of needing other people who are likely to hurt them. Also the fear that everyone is playing a game in which the deck is stacked against them. Hans is a drunk and a wife-beater and also a veteran of multiple traumas: from love, from the military, from the limited opportunities of working-class life.

Fassbinder observes his characters so closely, so insistently that he gives them time to reveal themselves on their own terms and this is why his vision can simultaneously be cruel (honest?) and empathetic. It's unnerving, it's unforgettable, and it's absolutely beautiful. There's simply nothing like a Fassbinder film.

“The Merchant of Four Seasons” netted German Film Awards for Hirschmuller, Hermann, and for Best Film and also helped bring Fassbinder, known mostly locally until then, to international attention. It was one of the main films that cracked open the door for the New German Cinema to become perhaps the defining force on the international festival circuit in the mid-'70s with Fassbinder (along with Werner Herzog, Wim Wenders, and others) at the forefront of the movement. 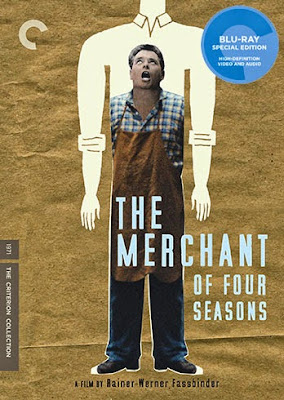 Video:
The film is presented in its original 1.37:1 aspect ratio. As far as I know, the only previous Region 1 release of the film was the 2002 DVD from Wellspring which seemed just fine at the time and, to be fair, deserved to be. Expectations have been raised in the interim, however, and this high-def upgrade represents a substantial improvement. The image is darker and richer than the old Wellspring with the expected significant advance in image detail, most notable in close-ups. Colors are rich but never oversaturated, giving the film a vibrant look throughout. This just looks wonderful.

Audio:
The linear PCM Mono track is clean and distortion-free. It's not particularly dynamic and isn't meant to be. It does its modest job just fine. Optional English subtitles support the German audio.

Extras:
The film is accompanied by a commentary track by director Wim Wenders. This track was recorded in 2002 and was included on the 2002 DVD release of the film by Wellspring.

All of the other extras are new to this 2015 Criterion Blu-ray release. First is an interview with actress Irm Hermann (2015, 9 min.) who fondly discusses how a chance meeting with Fassbinder took her from office work to movie stardom. Actor Hans Hirschmuller (2015, 13 min.) also discusses his rewarding and challenging working relationship with Fassbinder.

The final extra is an interview with film scholar Eric Rentschler (2015, 26 min.) who talks about the importance of the film in Fassbinder's career and also goes over the influence Fassbinder's discovery of Sirk had on his work.

Final Thoughts:
“The Merchant of Four Seasons” is not Fassbinder's first great film, but it is his breakout and still ranks as one of his best. It's also a candidate for Irm Hermann's best role which is saying something. I love everything about this masterpiece.
Posted by Christopher Long at 11:43 PM