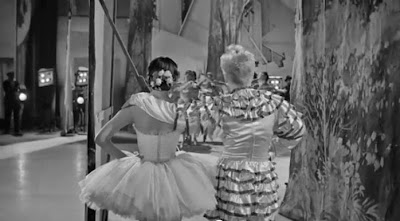 
Charlie Chaplin's portrayal of the aging comedian Calvero who has lost touch with his audience is indisputably autobiographical, but don't let that lull you into a simplistic reading of “Limelight” (1952), Chaplin's final American film.

“Limelight” opens in London in 1914, the exact time when 25-year-old Chaplin's unparallelled Hollywood success story was opening its first chapter at Keystone Studios. By contrast, Calvero (played by a 60-year-old Chaplin) has already traded in success for the transient companionship of the whiskey bottle. Partially in denial, Calvero tries and fails to win over jaded audiences with hoary song-and-dance numbers and a pantomimed invisible flea circus routine that scratches precisely nobody's itch. His used to slay 'em; now he puts 'em to sleep.

The parallel to Chaplin's (in)famous one-man holdout against the talking picture is obvious, but the aging Calvero shouldn't be conflated with the aging Chaplin, not directly at least. Chaplin had experienced his first commercial flop in decades when he dared to turn the beloved Tramp into a serial wife-killer in his previous film “Monsieur Verdoux” (1947), but it was one of the very few blips in a nearly unbroken string of critical and box office triumphs by a movie star whose career spanned almost the entire existence of movie stars. Chaplin viewed the failure of “Verdoux” as an aberration, partially attributable to the terrible press he was receiving at the time due to the very public paternity suit filed against him by actress Joan Barry. He was confident that the still knew exactly what the public wanted and fully expected “Limelight” to be another hit.

Chaplin had, however, seen virtually all of his music hall and silent film contemporaries fall by the wayside, some done in by the emergence of cinema itself, others by film's traumatic shift to sound, a few by alcohol and depression. No doubt he was anxious about just how long he could be the sole survivor, but Calvero should be seen as an amalgam: part Chaplin, part Chaplin Sr. (the absentee father whose Calvero-like career and life was cut short by booze), and parts of various entertainers like Frank Tinney, a once-famous blackface comedian whose decline once prompted Chaplin to observe, “The Muse had left him.” 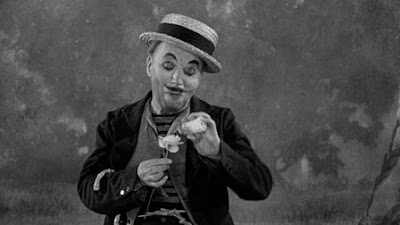 And so Calvero sings and dances and tumbles for increasingly unappreciative crowds; one audience heckler suggests it's time for him to go back home and, with a stiff tip of the cap, our hero agrees with the cruel but honest assessment. But while Calvero's professional comeback seems unlikely, hope arrives in an unexpected form. Stumbling home one afternoon to his empty apartment, the broken-down drunk Calvero briefly summons a sober and heroic impulse when he rescues an aspiring ballerina named Terry from a suicide attempt. Played by relative neophyte Claire Bloom, Terry assumes her place in the pantheon of blind flower girls and gamines from Chaplin's oeuvre, all damsels in various states of distress. Partially paralyzed, Terry remains bedridden as Calvero nurses her back to health and urges her on to the stardom he now believes he will never recapture for himself.

This thread produces some of the film's strongest and weakest sequences. Conversations between Calvero and the bedridden Terry grind the film's pace to a halt at times, their repetitive, strictly functional editing anchoring a performer renowned for his ethereal grace. The pantomime-loving Chaplin had long ago warned that “action always has to wait for dialogue” and these scenes seem to prove his point. Yet when a fully recuperated Terry finally takes the stage, her lengthy ballet performance (with professional dancer Melissa Hayden as stand-in) as Columbine, the result is movie magic, and a scene Chaplin considered one of the most satisfying achievements of his career as he composed and choreographed it all. 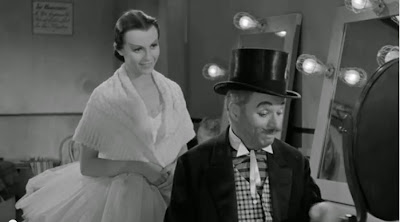 Bloom brings a wide-eyed innocence to her role that is undeniably attractive and “Limelight” benefits from the presence of a series of great supporting players including Nigel Bruce and Norman Lloyd, but the star attraction remains the same as in almost all of Chaplin's films: Charlie Chaplin. One of Chaplin's many unique gifts was the ability to teeter constantly on the edge of mawkishness without ever tumbling over. His infinitely expressive face can conjure any reaction on command and he knew how to work his sad eyes, his rueful smile, his comical gait to perfect effect whenever need, like striking keys on a piano. Chaplin is so at ease with his sixty-plus years that he seems every bit as impish and youthful as in his most Trampish days while also mining every wrinkle on his face for its accumulated wisdom. Calvero is both clearly past his time and utterly timeless.

The finest example of this qualilty is in the show-stopping finale which pairs a resilient Calvero
with his unnamed former stage partner played by the great Buster Keaton who had not quite made the transition to sound as seamlessly as Chaplin. Teamed up for the first time in a feature film, Chaplin and Keaton absolutely blow off the roof. The old guard still has to clear the stage for the youth wave, but they might as well show them how to do it right before taking their final bows. This final number would justify the entire film by itself, but it is merely the topper on a movie filled with delights.

Chaplin's confidence in the commercial prospects for “Limelight” proved unfounded. But then the film never really got a chance, at least in America. Hounded by charges that he was a Communist (false) and a moral degenerate (depends on your POV), Chaplin, a resident alien who had never filed for American citizenship, was denied re-entry to the United States after a trip to London for the film's world premiere. Instead of fighting the charges, Chaplin decided to relocate his family and his business, eventually settling in Switzerland where he proved he wasn't done working just yet. “Limelight” barely played in America due to numerous protests and wouldn't get an “official” Los Angeles opening until 1972.

“Limelight” survived. So did Chaplin. As for the various demagogues who nipped at Chaplin's heels, when's the last time you heard about any of them? 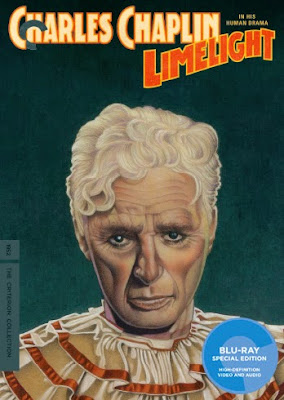 Video:
The film is presented in its original 1.37:1 aspect ratio. This transfer is sourced from a restoration conducted by Criterion and the Cineteca di Bologna. The result is quite impressive and certainly a massive improvement over the mediocre (though serviceable) transfers on the 2003 DVD from Warner Brothers. Image detail isn't razor sharp as with the top-line Criterion high-def transfers but it's very strong. Black-and-white contrast is both rich and subtle with a soft, naturalistic look throughout.

Audio:
The linear PCM Mono track is solid if unremarkable. There are a few minor drop-offs from time to time that are probably due to the source material, but nothing that detracts meaningfully from the experience. Optional English subtitles support the English audio.

Extras:
Criterion has included several new features for this 2015 Blu-ray release as well as some older features from a prior release.

The new features begins with a new video essay by preeminent Chaplin biographer David Robinson (2015, 21 min.) Robinson discusses the film's lengthy and unusual genesis, including mention of how Chaplin wrote a novel (called “Footlights”) instead of a screenplay to prepare the film; it included extended character backgrounds that didn't make it directly into the final film.

The disc also includes new interviews with actress Claire Bloom (2015, 16 min.) and actor/producer/everything-else Norman Lloyd (2012, 15 min.) My note on Bloom's interview is simply “Wow!”, a reaction to how charismatic she is. The magic of a disc like this: you can fall in love with 20-year-old Bloom in the movie and then again with 80-year-old Bloom on this feature. She has plenty to say about her first-time film experience with such a controlling and brilliant director. Lloyd is in his late-90's in this interview and is sharp as could be.

Another new inclusion on this Criterion release is the 1915 Chaplin short film “A Night in the Show” (25 min.) This is one of the later non-Tramp performances by Chaplin in the silent era and sees him in two roles as Mr. Pest and Mr. Rowdy causing havoc at a theater which features star acts such as La Belle Wienerwurst and Tootsy Frutti the Snake Charmer. This one cracked me the heck up. It has been restored by Lobster Film in 2014 and looks remarkably clear though also with little grain evident, suggesting some strong digital boosting. The film is accompanied by a new 2014 by composer Timothy Block.

The older features continue with a Deleted Scene (4 min.) in which Calvero meets an armless man, a former colleague from the stage as well as two brief Audio Excerpts (2 min. total) of Chaplin reading from “Footlights,” the novel he prepared for the film.

Finally, we get a six-minute excerpt from the unfinished 1919 short “The Professor” in which Chaplin performs the invisible flea circus bit that resurfaces in “Limelight.”

The thick 40-page insert booklet begins with an essay by the late, great critic and filmmaker Peter von Bagh and continues with an on-set report written in 1952 by United Press correspondent Henry Gris. It was apparently only published in excerpts in a few newspapers and was later discoveered among the Chaplin archives.

Film Value:
Because I screened this film as part of a course last year, I've now seen “Limelight” five times in the past ten months or so. It has grown on me each time. The sequences with Calvero talking to the bedridden Terry still drag for me, but when Chaplin/Calvero is on stage, it's magical. And it's just extraordinary to witness how Chaplin can generate just as much sympathy as a sexagenarian in the sound era as he did as the young, impish Tramp in a distant silent age. I guess the secret is talent.

Posted by Christopher Long at 10:29 PM