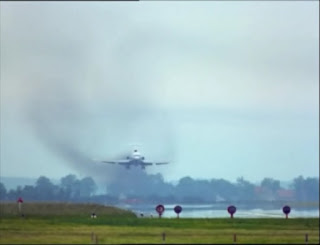 
How to make a movie the Werner Herzog Way, in four easy steps:

1) Show up in the Sahara Desert with a script for a science-fiction movie about an alien crew from the Andromeda Galaxy assigned to film a report about a strange planet called Earth.

2) Discard said science-fiction script on the first day of shooting because someone tells you that desert mirages can't be filmed and you, as both a Bavarian poet and a former Mexican rodeo rider, take that as a personal challenge.

3) Drive through multiple African desert nations in your rented VW van along with your tiny crew, filming whatever you find along the way until you get swept up in a coup d'etat in Cameroon and are thrown in an overcrowded jail where you almost die from malaria.

4) After being released from the Cameroonian prison, take your footage back to the editing room and create a masterpiece.

Yes, kids, it really is that simple. 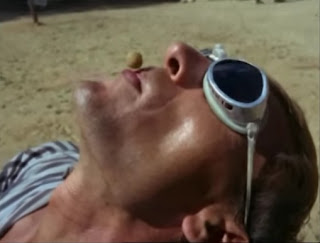 Describing “Fata Morgana” (1971) is a daunting enough prospect, let alone interpreting it. Why does the film begin with over four minutes worth of footage of various planes landing in the shimmering heat of a desert runway? Why is every third person we meet wearing the same pair of goggles? Is that really Leonard Cohen we're hearing on the soundtrack?

The answer to the final question is yes. As for the other two, beats me. Not quite knowing what you're looking at or why you're looking at it is integral to the pleasure of a freewheeling film difficult to categorize as anything other than a hallucination. What I am certain of is that the one compelling argument this not-a-documentary makes is that there is nothing in cinema as mesmerizing as a long tracking shot.

Cinematographer Jorg Schmidt-Reitwein shoots from the roof of the VW van as Herzog drives past a sinuous ridge of sand dunes (some hand-sculpted by the production crew to create more evocative contours) as tiny billows of sand blow off in the hot breeze; the longer the tracking shot continues the more those billows start to look like sheer rippling fabric. Later, lengthy aerial shots glide across a landscape mottled with patches of ice, or maybe they're salt flats, or possibly desiccated earth. Have I mentioned yet that “Fata Morgana” means mirage?

For more than the first twenty minutes, this chimerical terrain is devoid of people, but Herzog doesn't intend to settle into any comfortable pattern here. Eventually we will meet a menagerie of animals and people, some staring directly into the camera for uncomfortably long moments, many appearing disoriented as they gesticulate insistently off-camera at... something. A group of boys led by a teacher declare that “War is madness” and an ersatz scientist captures a giant turtle only to release it so he has something to capture the next day. 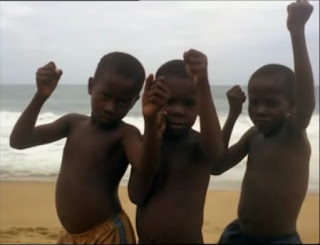 As bizarre as that all sounds, Herzog's wildest invention is the soundtrack, combining narration and one of the most unpredictable selections of musical tracks you've ever heard. In voice-over, several different speakers (beginning with German film guru and Herzog mentor Lotte Eisner) relate a creation story partly inspired by the Mayan “Popul Vuh” mythos and only obliquely related to the actual footage. Surely there's an ironic connection between shots of bleached carcasses lying in the sand and a voice-over speaking about man's dominion over the animal kingdom. I suspect Herzog's main goal is to recontextualize all of his images to form a radical new perspective, situating the viewers as those Andromedans trying to make sense of a baffling new world. Planet Herzog, to be specific. The creation story is broken into three sections, each divided by the repeated image of a half-glimpsed vehicle (or something) turning circles at the edge of the horizon, perhaps the most enigmatic image in a film replete with them.

The musical track is stranger still, combining classical and ecclesiastically-tinged tunes with the otherworldly “Ghetto Raga” by Third Ear Band, and pop tracks from Blind Faith and the aforementioned Mr. Cohen. Curiouser and curiouser still is the manner in which Herzog self-consciously underscores his manipulation of the various musical cues. In a bravura five-minute tracking shot (a relentless glide to the right broken up only by one cutaway) over industrial detritus and the bleached trailers of a desert town, Herzog begins with silence, cranks up a lengthy excerpt from Cohen's “Suzanne,” stops for a few lines of voice-over narration (“In Paradise, man is born dead.”), then rolls into the bulk of Cohen's “So Long Marianne,” all playing over that same almost unbroken tracking shot. You ask: Why? I respond: I've watched and listened to that sequence more than fifty times and I am overwhelmed on each viewing. Not only do I need not need to know why, I would dearly prefer not to.

The great critic and programmer Amos Vogel, an early Herzog booster, described “Fata Morgana” as “a cosmic pun on cinema verite.” I'm not sure that conveys the core essence of the film, but the final section does descend fully into the absurd, beginning with the strangest musical act in cinemahistory (this one I've watched over a hundred times) and ending with confused tourists stumbling around in ditches (Herzog directed them to “turn the pig loose”) and characters practically laughing themselves to death on screen, cf. the ending of “Even Dwarfs Started Small.” If you want to hear the normally unflappable Herzog crack the hell up, just listen to the commentary track starting around the one hour, seven-minute mark.

That doesn't mean “Fata Morgana” is intended as a joke. It is playful at times, morbid at others. For the viewer who tunes into its wavelength, the film is a visionary experience that inspires wonder and sometimes outright awe as it creeps up to and kisses the sublime threshold. I also feel safe in claiming that there is absolutely nothing else like it, not even its semi-sequel “Lessons of Darkness” (1992).

But really, there's just no way to describe it.

Video:
The film is presented in its original 1.37:1 aspect ratio. The high-def transfer from Shout! Factory is another “meh” effort, perfectly serviceable but nothing to brag about. Some of the sun-baked desert shots looks somewhat washed-out and the mediocre bit rate doesn't present the sharpest image quality. It's fine, a slight improvement over the old Anchor Bay DVD which, by the way, has to qualify as one of the odder DVD anomalies since this all-time great film was merely included as a “Bonus DVD” for Anchor Bay's release of “Lessons of Darkness” (1992). Sure, “Lessons” is a hell of a movie too, and the two films are definitely spiritual siblings, but “Fata Morgana” only a “Bonus DVD”? That's a hell of a bonus.

Note: Images in this review are NOT taken from the Blu-ray.

Audio:
The audio mix is competent if somewhat flat. No problems though. You can listen to the film with its German soundtrack or its English soundtrack (different narrators for both versions). Optional English subtitles support the audio, and can be a bit difficult to read over some of the whiter shots.

Extras:
The only extra is a commentary track by Werner Herzog, along with moderator Norman Hill and just-hanging-out-that-day actor Crispin Glover. I keep repeating myself: Herzog's commentary tracks are a performance art unto themselves and can be enjoyed over and over again.

In this Shout! Factory box set, “Fata Morgana” shares the same Blu-ray disc as “Land of Silence and Darkness.”

Final Thoughts:
A top ten all-time film for me. It's one of the movies I can see when I close my eyes.
Posted by Christopher Long at 12:55 AM