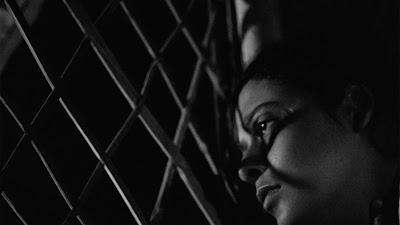 
In “The Cloud-Capped Star” (1960), adapted from a novel by Shaktipada Rajguru, writer/director Ritwik Ghatak displays a fondness for off-center compositions. One shot in particular obsesses me even though it marks only a minor beat in the story. Neeta (Supriya Choudhury), the hard-working daughter of a Bengali refugee family now living in Kolkata, sits near the right of the frame, situated at a slight diagonal. Her face half-covered in shadow, she turns slowly to the camera and flashes a radiant smile, the serene smile Neeta wears as a mask as her sufferings mount. Choudhury supplies the magnetic smile, but the delicate and eccentric staging turns it into a magical movie moment, one of many that makes this film so powerful and transforms Neeta into one of the most unforgettable heroines in any melodrama.

Early images in the film link Neeta directly to nature - a flowing river dappled by sunlight, a magnificently flowering tree that stretches to the heavens - all emphasizing her potential to flourish. She's a bright university student who also tutors on the side, a gig that makes her virtually the sole breadwinner for her family. It's a big burden to take on at a young age, but Neeta is a pure soul always ready to do the right thing. As her brother Shankar (Anil Chatterjee) delights in telling her, this is her first mistake, and quite likely a fatal one.

Everyone exploits her goodness and forbearance. Shankar devotes all his time to studying to become a singer, and knows he can do so because Neeta will shoulder the financial load. Neeta's boyfriend Sanat (Niranjan Ray) can be a full-time student because he can bum lunch money off his best gal. Mother (Gita Dey) sees no reason to marry off her oldest daughter because then who would keep the household running? Father (Bijon Bhattacharya), a literature professor whose best days are well behind him, seems the most sympathetic figure, a bit detached but generally well-meaning, but looks can be deceiving.

As father becomes an invalid and another brother moves away, the family becomes ever more dependent on Neeta, and she bears it all with that quiet, enduring smile. But the smile takes more effort to maintain with each cruel turn of fate, sags more at the corners of the mouth with each new responsibility crushing her to the unforgiving ground.

Melodrama literally means “music drama” and Neeta's barely-suppressed sorrow explodes in one of several extraordinary musical sequence in the film. She asks Shankar to teach her a song by Rabindranath Tagore, the renowned Bengali artist and polymath. Brother and sister sing it together slowly and mournfully, and when it ends, Neeta collapses, finally ready to weep for herself.

She has to cry for herself because nobody else will. Not her family, not the sun-dappled river, not that magnificently flowering tree that stretches to the heavens. And once she starts coughing, well, this is a melodrama and you can guess where it's heading.

It's all so damn overwhelming, but Ghatak really twists the knife in the closing scenes when we visit Neeta one last time. Dying and abandoned, she once again sits at the right of the frame, now with a vast hilly landscape stretching out to infinity behind her, a landscape that doesn't listen as she shouts out “I really did want to live!” Jumping to the center of the frame now, she begs, “Tell me just once that I will live!”

I can't go on. Honestly. I watched this movie a week ago, and it's still difficult to talk about. Choudhury is amazing. The soundtrack (music as well as effects) is amazing. The photography by cinematographer Dinen Gupta and his crew is amazing. I need a little more time to process it, but “The Cloud-Capped Star” may well be the greatest melodrama I've ever seen. 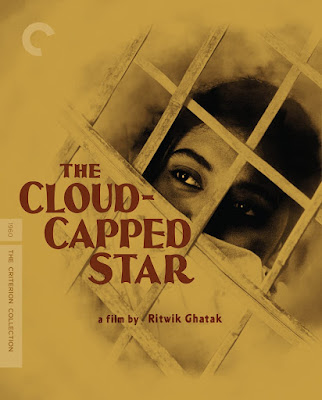 Video:
The film is presented in its original 1.37:1 aspect ratio. The Criterion booklet notes that “this new 2K digital restoration” used the 35 mm original camera negative preserved at the National Film Archive of India in Pune and also a 35 mm print from the Library of Congress “for sections of the film where the original camera negative was damaged or incomplete.”

With multiple elements used, the image quality does vary a bit but not in a pronounced fashion – a few shots perhaps don't look quite as sharp, but in general this looks good overall. The black-and-white contrast is strong overall, though a few scenes look a bit washed-out. Also in a few scenes white subtitles over white portions of the image can be a bit tough to read.

Audio:
The linear PCM mono track shows more wear than the image does with a few moments where volume drops off and some extraneous noise can be heard on the soundtrack. The music can also be a bit tinny in a few scenes, but overall the audio is solid, surely as much as can be expected from the source. Optional English subtitles support the Bengali dialogue.

Extras:
Criterion has only included a few modest supplements with this Blu-ray release.

We get a lengthy and substantive conversation between filmmakers Saeed Akhtar Mirza and Kumar Shahani. Both were students of Ghatak's at the Film and Television Institute of India at Pune, and they bring both personal knowledge of and a sincere admiration for Ghatak to this discussion, which covers a wide array of topics relevant both to the film and to Ghatak's career.

The only other extra is a Stills Gallery, which presents photos of Ghatak that were included in the book “Life After Ritwik Ghatak” cowritten by Surama Ghatak, the director's wife, and the director's grandniece, Nabarupa Bhattacharjee.

Final Thoughts:
I first read about “The Cloud-Capped Star” about 15 year ago, most likely from Jonathan Rosenbaum. Since then it's been at the very top of my list of Currently Unavailable Films I Desperately Want To See. It easily exceeded my lofty expectations. Criterion has made this masterpiece by Ritwik Ghatak available in the North American region for the first time (as far as I know) and even if it's a bit sparse on supplements, that makes this one of the must-have Blu-rays of the year.
Posted by Christopher Long at 9:51 AM