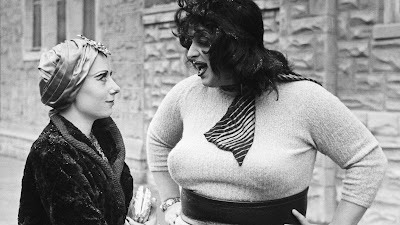 (Listen, there are some plot spoilers below. That's the least fucking offensive thing you're going to have to worry about.)

From puke eating to hairy-armpit licking to lobster rape (see below), “Multiple Maniacs” (1970) epaters the unholy shit out of le bourgeois in every sacrilegious (and sacrilicious) manner imaginable – and when the controlling imagination belongs to writer-director (producer-editor-cinematographer) John Waters, you can be sure that no taboo will leave unviolated. Viewers may wind up feeling equally violated; consider it a freebie included with the price of admission.

The film opens with Lady Divine's Cavalcade of Perversions, a makeshift circus pitched by low-rent carnival barker Mr. David (David Lochary) as “the sleaziest show on earth” and guaranteed to feature performers who are “not actors, not paid impostors, but real, actual filth!” The hapless local rubes who can't resist a free show before lunch get treated to a show starring the aforementioned puke eater and armpit lickers along with a real heroin junkie going through withdrawal, and a particularly delicate performance that induces the lucky onlookers to say, “Look at her cunt... I can smell it all the way from over here.” It's like “The Sound of Music” all over again. For the final act, the attendees get robbed and murdered by the freaks – yet another freebie. After that, the film starts to get a little gross, eventually requiring the national guard to clean up the mess.

Waters most certainly pursued shock for the sake of shock (what nobler goal?), but the film never feels like a phony exercise in cheap provocation precisely because the cast is populated with “real, actual filth.” Waters' Dreamland Players (a sobriquet designated by fans many years later) may not have been actual murderers or lobster fuckers (see below), but there was no mistaking them for professional actors playing at being junkies and freaks after months of careful field study – these were genuinely devout perverts who congregated at the church of the Pope of Trash. Most of the beloved players are here already in this pre-Flamingos phase, the great David Lochary in his finest role (his delivery of the line “I love you so fucking much, I could shit” is without peer) with plenty of room left for Mink Stole, Mary Vivian Pierce, and Cookie Mueller to shine, by which I mean wallow in the sewer. Plus the legendary Edith Massey makes her big screen debut.

In this feature-length cavalcade of perversions, no spectacle is more morally repugnant than the sequence in which a man is stripped, beaten with whips and chains, repeatedly spat upon, then nailed to a crucifix and left to die. This grotesque display, of course, is familiar to Catholics like John Waters and yours truly as a Good Friday at Church, and his graphic staging of the Stations of the Cross (with Edith Massey as the Virgin Mary, natch) is a reminder that even the Pope of Trash can't outgross the Holy Church. They tell this blood-spattered story to kids – every damn year! The fact that Divine imagines said Stations while getting an energetic rosary job from Mink Stole is, well, it's just the kind of thing you have to see for yourself. 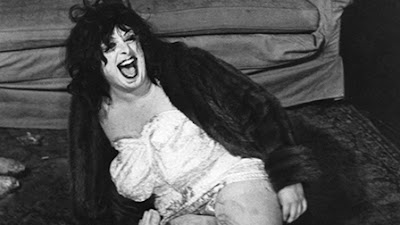 Divine's swath of pure rage, cut across the sparsely-populated streets of Waters' beloved hometown of Baltimore, can, as I'm sure you've already figured out, only lead to one logical and inevitable endpoint - being raped by a giant papier-mache lobster. The true genius of this magnificent scene, one of the very greatest moments in all of American cinema, is that Divine actually knows the name of her attacker and cries it out during the throes of passion, “Lobstora!!!” Does this mean they've dated before? It's almost inconceivable that John Waters had to wait until 2017 to receive a career achievement award from the Writer's Guild of America.

Thanks to the real, actual filth both in front of and behind the camera, “Multiple Maniacs” traffics in a brand of authenticity that speaks directly to the receptive viewer and spills over the bounds of the safe, traditional narrative cinema. But beyond the blasphemy (which sounds like a cable show John Waters should host), “Multiple Maniacs” ultimately succeeds because it is so clearly a labor of love, a film made by a group of friends giddy at the prospect of making a movie together, eager to share their world and maybe disrupt a few other worlds along the way. In other words, they sure as shit look like they're having a lot of fun.

Still, you have to wonder about the choice of a title. With the puke eating, lobster fucking (see above), rosary insertions, Edith Massey, off-screen gerontophilia, heroin shooting, and gang rape, it seems obvious that John Waters should have called it... The Aristocrats! 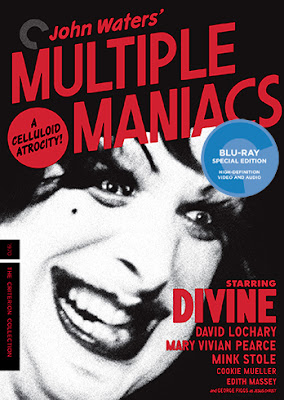 Video:
Seriously, who the fuck ever expected this to get a full digital restoration courtesy of Criterion? Waters actually kept the original reversal of the 16mm film in his attic for over twenty years – somehow it survived intact enough to wind up looking pretty damn good after a restoration. In one scene, a prominent bit of dirt couldn't be cleaned off, but does it really matter? I don't recall being able to see the décor of Divine's home in such detail before, including making out all the movie posters on the wall. The film is presented in John Waters' preferred 1.66:1 aspect ratio.

Audio:
The LPCM mono track is reasonably clear, at least relative to the limitations of the original recording. Waters shot in a format that recorded the audio directly onto the film, which leads to some abrupt audio cuts and also to some audio dead space. It's all just fine. The eclectic music track sounds a bit tinny but, again, seriously, I mean – this is getting a damn Criterion release! Optional English subtitles support the English audio.

Extras:
When “Multiple Maniacs” was first announced for Criterion release, I hoped we would get some of Waters' earlier films like “Eat Your Makeup” or “Mondo Trasho” as extras. No dice. Perhaps the music clearance rights still render any “official” releases unfeasible.

Fortunately, we get the most important of all possible extras, a newly recorded (2016) commentary track by John Waters. There are times when he clearly can't believe he actually made certain choices, and at least one moment where he says “Thank God my mother never saw this.” It's a wonderful commentary, as you would expect.

We also get a collection of interviews with some of the surviving Dreamland actors, including Mink Stole, Pat Moran, Susan Lowe, Vincent Peranio, and George Figgs. This 32-minute collection, recorded in 2016 in Baltimore, includes fond reminiscences about some of the departed Dreamlanders as well as insider accounts of what it was like to work for John Waters, who is generally depicted a rather exacting perfectionist on set. Lobstora's budget is quoted at $37.50 by designer Peranio.

“The Stations of Filth” (10 min.) is a short video essay by scholar Gary Needham, which combines analysis with some trivia (Waters recently described this film as “Rancid Strawberries” a la Bergman) and argues most persuasively that the film should be understood as surreal rather than primarily as camp, which is spot on.

Film Value:
I am proud of myself for resisting the obvious line, “I love this movie so fucking much, I could shit.” That would be way too on the nose. Which is why I would never write it.