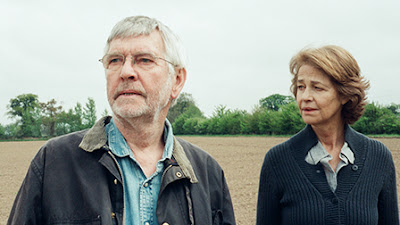 
In Andrew Haigh's relationship drama “45 Years” (2015), Kate (Charlotte Rampling) and Geoff (Tom Courtenay) Mercer while away their days in a pleasant if uneventful retirement in rural Norfolk; their main project is the preparation for their impending forty-fifth anniversary party with friends and family eager to help the happy couple celebrate their long journey together. It's quickly obvious that Kate is the calm, pragmatic planner in the marriage, but she didn't plan for the arrival of a letter that informs Geoff of a shocking discovery related to his past. His already eccentric behavior becomes increasingly erratic, and Kate's determined effort to unearth the reasons behind his deterioration will bring explanations, but not solace.

Level-headed Kate slowly but surely becomes increasingly rattled, though it's not easy to tell exactly why this particular news hits her so hard. Perhaps she's most disturbed by the unpleasant reminder that even an equilibrium established through forty-five long years of hard work and compromise can be so inherently unstable. Rampling earned a myriad of awards for her slow, simmering performance that never quite boils over, but still leads to a dramatic and definitive breakdown. I have to admit I didn't find her series of icy, increasingly hostile stares to be all that compelling, or even convincing, particularly in a final scene that felt forced to me, as if it was the one moment Haigh determined to work toward before planning anything else in his adaptation of David Constantine's short story, “In Another Country.”

On multiple occasions I wondered, “What in the hell is she so upset about?” The chorus of critical hosannas from around the world (at 97% on the Holy Tomatometer, “45 Years” was one of the most praised films of 2015) suggests I must consider the possibility that I flat out didn't get it, which has been known to happen from time to time. Perhaps it's just because I tend to be a lot less interested in dialogue-heavy, two-hander dramas than most viewers. A whole, whole lot less. Way less. However, I liked Haigh's previous film. “Weekend” (2011), also released by Criterion, so it'll just have to remain a mystery.

It's not a mystery I'm terribly motivated to solve. I'll encourage you instead to check out the film's more positive reviews. You won't find any shortage of them. 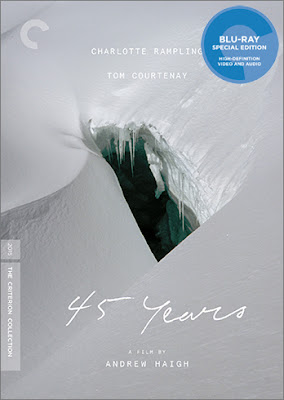 Video:
The film is presented in its original 1.85:1 aspect ratio. As you would expect for such a recent film, the high-def transfer is practically immaculate, with razor-sharp image quality, and warm but subtle colors. No complaints at all on this front.

Audio:
The DTS-HD Master Audio 5.1 surround track doesn't have to deal with much beyond dialogue so don't expect any revelations on the surround front. But it's a crisp, distortion-free mix which more than does the job. Optional English subtitles support the English audio.

Extras:
Criterion has gone a bit light on the supplements, but what's here is good.

Haigh adapted the film from author David Constantine's (very) short story “In Another Country.” In an interview (13 min.), Constantine talks about his story and his reaction to the film version.

A Trailer (2 min.) rounds out the extras.

Film Value:
I'm confident that you'll like the film more than I did. And even if you don't, check out Haigh's “Weekend” which was also released by the Criterion Collection.
Posted by Christopher Long at 10:33 AM