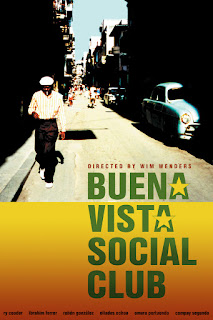 
The secret to the smash success of Wim Wenders' “Buena Vista Social Club” (1999) is no secret at all: it dishes up great music and that most reliable staple of all filmmaking both fictional and non-fictional, instantly likeable characters.

The title album had been released two years earlier to great success, in part thanks to the producing and marketing efforts of American musician Ry Cooder, who was keen to share the sounds of the great Cuban soneros of the pre-Castro era who, if not forgotten, were not the stars they deserved to be. The album was an instant hit, but Wenders' follow-up documentary, which directly follows Cooder on trips to Havana as well as on tour with the Club, launched it into the stratosphere as one of the best-selling records in the world. Where Cooder helped to sell the music, Wenders painted vivid portraits of the musicians behind the sound.

Of course, the real credit belongs to the performers themselves whose extraordinary appeal revolves around their definitive repudiation of any notion that advancing age must lead to gradual obsolescence. Ranging from their swinging sixties to their virile nineties, these singers, piano players, guitarists and percussionists leap off the screen as the youngest, freshest act in all of world music. Listeners encountering them for the first time had no doubt that they were hearing these performers right in the the primes of their careers.

Singer Ibrahim Ferrer emerges as the film's star. A mere lad of seventy, Ferrer's smiling face lights up the frame and his soulful baritone is so rich and elegant, audiences will be shocked to learn that the Buena Vista Social Club was his first broad success aside from his club days in the fifties. Singer Compay Segundo charms audiences with a knowing wink by noting that, at age ninety, his main interests in life remain women and rum, and music too. Pianist Ruben Gonzalez and singer Omara Portuondo (in her mid-sixties, the kid in the group) are so charismatic, you only regret that the film afford them so little time.

Wenders has minimal interest in presenting context or exploring background, so curious viewers will have to hit Google to learn where some of these performers got their starts or even what the title actually refers to. Instead, Wenders balances the film between stage performances and studio recording sessions, and traveling shots that glide through the streets of Havana or probe gently into the homes and private lives of the musicians.

At times, I find myself frustrated by Wenders' predilection for cutting from the middle of a rollicking number to another shot of waves splashing over the sides of a low-lying Havana bridge, but fans can always cue up the album for more sustained blasts of musical bliss. The film tracks the band's journey from Havana to a sold-out concert in Amsterdam and ultimately to a climactic Carnegie Hall performance with relish, but the point, I believe, is that their ongoing story consists of far more than just a few high-profile concerts, or even that smash album.

I remembered “Buena Vista Social Club” as being much more of a sustained rush than it actually is. Its pleasures are more mellow and contemplative than your typical concert film, and if it leaves you wanting much more of the actual music, then consider the possibility that that was precisely Wenders' intention. 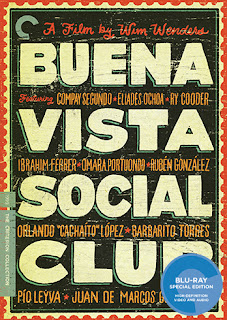 Video:
The film is presented in Wenders' preferred aspect ratio of 1.78:1. This was filmed during the brief period where MiniDV was all the rage. It felt like it looked good then, but admittedly hasn't worn well even after a short period of time. The original master tape was used to make a 35 mm negative and that was the source for Criterion's digital restoration. I'm not sure exactly how much restoration was done, but the image quality is crisp throughout even if the MiniDV color scheme inevitably looks a bit wan and the overall look will never knock anyone out.

Audio:
The DTS-HD Master Audio 5.1 track is rich and vibrant and does justice to the music that is the heart and soul of the project. Optional English subtitles support the Spanish and English dialogue.

Extras:
Criterion has piled on the extras once again, though some have been imported from earlier releases.

The commentary track with Wim Wenders was recorded in 1999, way back in another century.

Wenders also chimes in with a new interview (Dec 2016, 26 min.) recorded for Criterion in which he shares his obvious fondness for his subjects, and also speaks about his long-term working relationship with Ry Cooder.

The disc also includes a 1998 interview with Compay Segundo (60 min.), originally broadcast on the Spanish television show “Las Claves.” For fans who want much more of this nonagenarian dynamo, the interview delivers the goods.

We also get a series of short radio interviews with various Club members, including Eliades Ochoa (10 min.), Manuel “Puntillita” Licea (8 min.), Orlando “Cachaito” Lopez (5 min.), Manuel “Guajiro” Mirabel (7 min.), Juan De Marcos Gonzalez (11 min.), Omara Portuando (8 min.), Ibrahim Ferrer (6 min.), Barbarito Torres (7 min.), Pio Leyva (6 min.), Ruben Gonzalez (7 min.), Manuel Galban (9 min.), and Alberto “Virgilio” Valdes (8 min.) It's more than a little sad to realize that so many of the performers have since passed on – it still feels like many of us only just met them – but that only makes these interviews even more valuable.

Finally, the disc includes three additional scenes (19 min. total) which includes a full version of the song “Candela” performed in Amsterdam as well as a Theatrical Trailer (93 seconds).

The insert booklet includes a lengthy essay by author and geographer Joshua Jelly-Schapiro.

Film Value:
I dug up one review that predicted the “Buena Vista Social Club” would be unlikely to win over any new fans. Safe to say that call didn't pan out. “BVSC” is one of the most successful music documentaries of the past few decades, and its many pleasures are obvious to all. I do wish it was heavier on the music and perhaps a bit lighter on tracking shots through the streets of Havana, but that's a minor quibble, and fans who get a taste of the performers in this movie now have ample opportunities to seek out more of their work.
Posted by Christopher Long at 6:47 AM