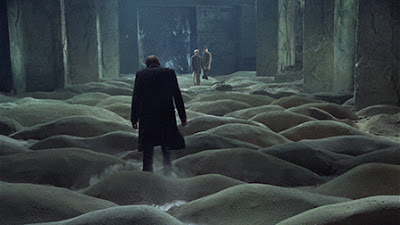 
Plot Summary: The Stalker (Alexander Kaidanovsky) guides two other men, the Writer (Anatoly Solonitsyn) and the Professor (Nikolai Grinko) into the Zone, a dangerous and heavily guarded territory left behind by alien visitors (or maybe it was a meteor) some years ago. They infiltrate the Zone in search of the Room, located either a few hundred yards or a million miles from the Zone's outer border, a space where they hope to achieve their deepest desires.

There, now you know precisely nothing about Andrei Tarkovsky's “Stalker” (1979), loosely (and I mean loosely) adapted from the science-fiction novel “Roadside Picnic” by Boris and Arkady Strugatsky, at least nothing of much relevance. You're welcome. I'll try to be more a bit more helpful. 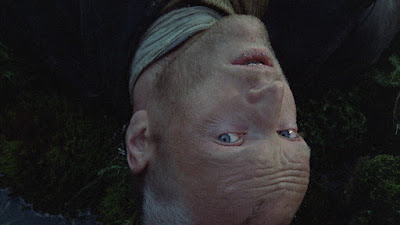 When I think of “Stalker,” I think of skulls. The three men's heads are balding, closely-shaved, and the camera lingers on their oblong craniums from behind, in front, and above, following closely (stalking) while they trudge slowly through the knee-deep water of the industrial wasteland of the Zone or clinging skull-tight as they sit or lie in the undulating grass and shifting sand dunes, contemplating where to move next, or whether there's still any point in moving at all.

When I think of “Stalker,” I think of the pollution. Tarkovsky may well have captured the single most fetid landscape in all of cinema. We might expect the “meatgrinder” sewer pipes to swell with waste, but the surface water teems with glistening oil as well, positively reeking of chemical effluent. No wonder the geography of the Zone shifts constantly, rendering even the seemingly straightest of paths a Mobius strip to nowhere – the Zone writhes in silent, unending torment.

When I think of “Stalker,” I think of how startlingly beautiful the film is despite this most devastated of landscapes. After all, the scenes outside of the Zone are filmed in drab, monochromatic sepia only to explode Oz-like into full color after the men cross an indeterminate barrier – not a Rubicon, they can turn around any time they want, but a definitive break into another realm, nonetheless, perhaps into the uncharted land of their own minds. 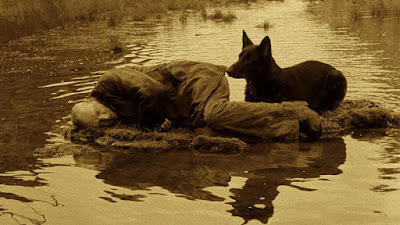 Everything about “Stalker” screams for a metaphorical interpretation – naming your characters only Stalker, Writer, and Professor certainly points viewers in that direction. But Tarkovsky said, “The Zone doesn't symbolize anything, any more than anything else does in my films; the Zone is a zone, it's life, and as he makes his way across it a man may break down or he may come through.” Many directors resist having their work pigeon-holed and it's reasonable to accuse Tarkovsky of playing coy here, but I choose to take him at face value.

Though the Stalker approaches the Zone with faith, as a holy seer of sorts (or at least as an aspirant), he winds up as lost as the Writer and the Professor. They stumble half-blindly through one maze-like section of the Zone after another, sometimes only to wind up back where they started, wasting time on ill-considered detours, yet stubbornly plunging ahead, all to reach a destination that may well prove to be a terrible disappointment. They ask a lot of questions along the way in lengthy, heady philosophical debates that straddle the border between profundity and sophistry, but find few answers, just more Zone to traverse.

All of which sure sounds like life to me. No clear path, no easy answers. Perhaps no destination at all, just the journey itself, made meaningful precisely my making it, and then making of it what you will.

Of course there's much more to the film. Much more than I've grasped yet. I haven't even mentioned the Stalker's wife and daughter, whom a cheeky critic could argue are the actual main characters of the story, though they spend most of it off-screen. Or how gloriously, rapturously slow “Stalker” is. Tarkovsky spoke often about sculpting with time, and his camera holds unwavering on lengthy shots of men walking or not moving at all, on fields of grass rippling in the breeze, yielding boredom in some viewers, hyper-attentive awareness to detail in others, carving out a contemplative space. If you fall into the latter camp, you might find yourself returning obsessively to the Zone, as thousands of other viewers have, searching for... but, no, just focus on the journey itself, and an immersive audiovisual experience like few others. “Stalker” joins “2001: A Space Odyssey” as one of the few films worthy of being considered “the ultimate trip.” 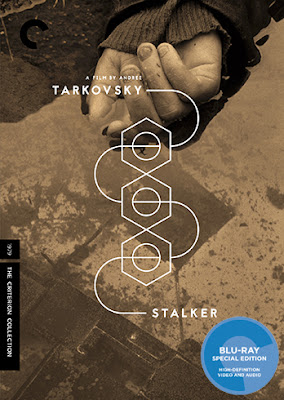 Video:
“Stalker” recently completed a successful theatrical re-release with a new restoration from Mosfilm Studios, and this high-def transfer from Criterion is sourced from that restoration. “Stalker” mixes sepia-toned monochromatic sequences with naturalistic color ones and employed three cinematographers. With most of the principal filmmakers dead, nobody can confirm how close this restoration matches the original intent, but this 1080p transfer most certainly looks fantastic. Image detail is sharp throughout, the bright colors look rich and subtle, and the sepia that I used to think looked rather wan to a slightly distracting degree now looks better as well. I have no idea if some of the film's fanatical partisans are debating the “authenticity” of this Criterion release, but I've never seen the film looking any better (alas, I didn't get to catch it in a theater over the spring.)

The film is presented in its original 1.37:1 aspect ratio (as always, photos in this review are not taken from the Blu-ray).

Audio:
The linear PCM mono track has an unusually dynamic sound for a monaural track. In “Stalker” the sound design is just as crucial a creative element as the visuals and this lossless mix really makes the distinct sound effects stand out, along with the spare score by Eduard Artemyev. Optional English subtitles support the Russian audio.

Extras:
As exciting as it is to have “Stalker” available with a great new high-def transfer and a sharp audio mix, the relative lack of supplemental features is mildly disappointing. Fans might have expected a film of this stature to arrive packed to the gills both with historical features and scholarly analysis.

Perhaps the heftiest features were tied up in rights controversies, but the only substantial extra included is a new interview (29 min.) with Geoff Dyer, author of “Zona: A Book About A Film About a Journey to a Room.” Dyer really loves “Stalker.” I mean, really, really loves it. A few years ago, in addition to writing his book on the experience of watching the film over and over again, he also wrote “...it's not enough to say that 'Stalker' is a great film – it's the reason cinema was invented.” Dyer takes a half hour to talk about his experiences with the film, from his impatience on his first encounter with this “slow” movie to how easily he gets sucked back into the Zone at each new screening he attends. He begins with the interview with caution about “permanently inhabiting the land of the superlative” regarding the film, but, well, that's just his zone. And he makes it work.

The other extras are all older interviews, with the film's composer Eduard Artemyev (2000, 21 min.), set designed Rashit Safiullin (2000, 14 min.), and cinematographer Alexander Knyazhinsky (1996, 6 min.), the latter filmed in his hospital room shortly before his death.

Final Thoughts:
Final thoughts? How can you have final thoughts on a journey that's just getting started? I'll settle for saying that while Criterion's release doesn't offer the bevy of extra we might have hoped for, the image and sound on this version are immaculate, and that's more than enough to make this a must-own for any Tarkovsky fan.

Posted by Christopher Long at 9:48 AM