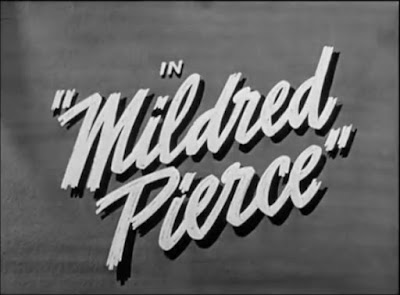 
At the intersection of film noir and maternal melodrama sits “Mildred Pierce” (1945), a story of fresh home-made cakes and cold-blooded murder, though not in that order, although actually in that order.

The film opens in a beach house shrouded in night-time shadows where the first clear sound after the title music fades is a volley of gunshots rattled into a man (Zachary Scott) whose congenital shadiness is indicated with forceful economy by the thinness of his mustache. His final word as he drops to the floor is “Mildred” after which said Mildred (Joan Crawford) flees into the night, soon to be brought in by the police for questioning.

Even the most casual filmgoer can quickly figure out that the identity of the shooter wouldn't have been artfully concealed by director Michael Curtiz if it was, indeed, Mildred Pierce, but the film preserves the mystery as Mildred relates her tale of woe to the lead detective in an extended flashback which actually represents the bulk of the James M. Cain novel from which the film was adapted, the juicy murder being added for salacious purposes by the wise folks at Warner Bros.

In better days, Mildred is a diligent housewife baking cakes to sell to the neighbors and doting on her beloved daughters, teenage Veda (Ann Blyth) and little Kay (Jo Ann Marlowe). Diligent, but not happy. Her marriage is already on the rocks and soon ends with husband Bert (Bruce Bennett) moving out to live with another woman. When Mildred breaks the bad news to the kids, Veda turns out to be far more interested in the new dress that just arrived for her, the first indication that this seemingly formulaic story of marital strife is about to take a decidedly idiosyncratic turn.

Bert's fires a nasty parting shot at Mildred: “Let's see how you get along without me!” She proceeds to get along fabulously, parlaying her experience in the kitchen first into a gig as a waitress, then as a savvy entrepreneuse with an ever-expanding chain of restaurants that can barely accommodate the bustling crowds. The ring of spotlights flooding the night sky above the newest Mildred's announces to all nearby that the American Dream is alive and well and fully achievable through hard work and grit. 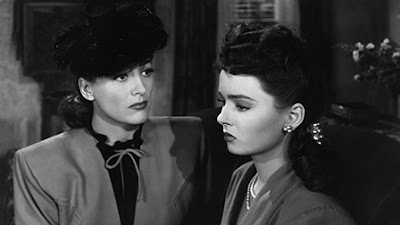 Yet Mildred is desperately in love, and it's an all-consuming love that will undermine all of her accomplishments. She's not in love with Bert, not anymore, nor with pushy. predatory real estate broker Wally (Jack Carson), and not even with creepy mustache guy from the opening. No, in a clever twist on the amour fou formula, Mildred obsesses endleslsy over Veda, her spoiled, icy-cold, sociopathic daughter, and she will do anything and risk anything to win her girl's love, though she's probably aware no such thing exists. Considering the sorry display of feckless manhood in the film, it's not as if Mildred was blessed with many outlets for her affections.

After playing the sweet teen ingenue in a few musicals the year before, 16-year-old Ann Blyth portrays Veda as the baddest of seeds, a brat who sees herself as entitled to all privilege and ashamed of the mother willing to work (“My mother, a waitress!”) to provide it all for her. Able to lie and fake-cry at a moment's notice, Veda is one of the strangest and most intimidating femmes fatales of the noir cycle, twisting her hapless mother around her bloodless little finger, toying with her for sport.

Mildred's doting approach to motherhood comes in for criticism by Bert, by her flinty friend Ida (Eve Arden), and most pointedly by Veda herself when she speaks her only truthful words, “It's your fault I'm the way that I am.” Mildred's unwavering devotion collapses into full-blown pathology and has left a few viewers exasperated with her destructive dependency (and also prompting a delightful Carol Burnett parody) but her unhealthy relationship with Veda is hardly unique. I can't help but be reminded of Anthony Trollope's 1875 masterpiece “The Way We Live Now” and the dandyish, dissolute Sir Felix Carbury, an idler who takes responsibility for nothing, cries every time someone holds him responsible for his actions, and is enabled by a mother who covers for his every offense. Sir Felix may be the most infuriating literary character I've ever encountered (oh, the sweet, sweet beatdown he finally takes!), demanding that everyone cater to his whims and running back to mommy every time he encounters the slightest obstacle. Felix and Veda are soulmates, but she would chew him up and spit him out on his skinny fop ass.

“Mildred Pierce” netted Joan Crawford her only Oscar and revitalized her flagging career, paving the route to some of her juiciest roles: “Possessed” (1947), “Daisy Kenyon” (1947), “Sudden Fear” (1952), and cinephile holy grail “Johnny Guitar” (1954). Crawford considered it her finest work and spoke of it often and fondly in later-career interviews. The film has since become a cult-favorite, still playing to sold out houses in repertory screenings over seventy years later. 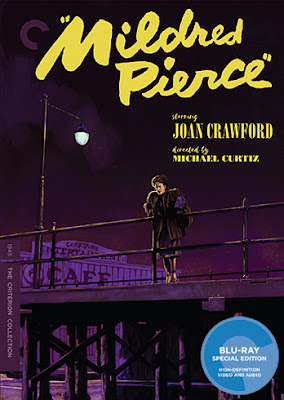 Video:
The film is presented in its original 1.37:1 aspect ratio. From Criterion: “This new digital transfer was created in 4K resolution … primarily from the 35 mm original nitrate camera negative. Some sequences, including the entire last reel of the film, were scanned from a 35 mm nitrate fine-grain master held by the Museum of Modern Art in New York and a 35 mm safety fine-grain master.” I didn't notice any difference in the final reel, or any other sections that might have been sourced from different prints. Overall, the black-and-white contrast is sharp and rich with plenty of detail apparent even in the darker sequences which show only modest signs of boosting. A few bits of minor damage are visible on occasion, but not much. Overall, the typical strong 1080p transfer from Criterion.

You can watch this short video about the film's restoration from Criterion on YouTube. This video has not been included on the disc as an extra.

Audio:
The linear PCM mono track is solid if unremarkable. Dialogue, effects, and music are crisp and clear, though not particularly dynamic. No complaints. Optional English subtitles support the English audio.

Extras:
Criterion has included a mixture of new and older supplemental features for this Blu-ray release.

The longest extra was included on the old Warner Brothers DVD release. “Joan Crawford: The Ultimate Movie Star” (2002, 87 min.) is directed by Peter Fitzgerald. This feature, narrated by Anjelica Huston, was made with the contribution of Crawford's daughter Christina and provides a career-length portrait of a highly-motivated professional who wasn't able to find as much time for her family as for her long and celebrated career. There's not as much film-specific content as one might like, but the feature covers a lot of ground in a short period of time.

Criterion serves up one brand new interview (2016, 23 min.) in which film critics Molly Haskell and Robert Polito discuss the film's cross-genre elements, the changes from the Cain novel, and a host of other issues.

Several other archival interviews have also been included. We get an excerpt (15 min.) from the Jan 8, 1970 “David Frost Show” in which Crawford reveals that her favorite food is pork chops. Next is a Q&A sesssion (24 min.) from the Castro Theatre in San Francisco, featuring guest star Ann Blyth at a 2006 screening of “Mildred Pierce.” The final piece is my favorite on the disc, an excerpt from the Nov 26, 1969 episode of “The Today Show” with Hugh Downs interviewing novelist James M. Cain, who holds court on a host of social issues and admits that he doesn't get Norman Mailer at all.

The final extra is a Theatrical Trailer (2 min.)

Final Thoughts:
Critic Manny Farber found “Mildred Pierce” to be “badly hoked-up” and viewed Mildred as “a fool.” There's little doubt that the melodramatic story is overwrought at times, but that's hardly distinguishes it from many other melodramas. I don't think the film's a masterpiece, but Crawford's wonderful, and Ann Blyth repeatedly strikes the same single note in a convincingly chilly manner. And you're unlikely to ever see the film looking better than on this Criterion high-deg transfer.
Posted by Christopher Long at 5:27 PM