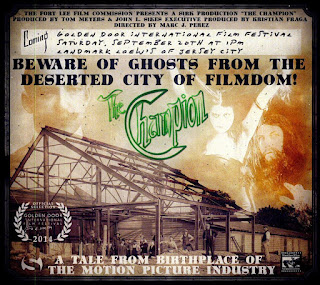 
On the run from the big-city crime syndicate's goons, an intrepid band of heroes hides out in a sleepy little town …

No, that's not the set-up for a low-budget crime caper or Western, it's the set-up for actual film history. OK, perhaps the Motion Picture Patents Company (AKA The Edison Trust) wasn't an actual crime syndicate, but their rigorous enforcement of the stranglehold they held on crucial motion-picture equipment patents forced many independent New York-based filmmakers to devise more innovative methods of production.

One of the simpler strategies was to hop the ferry across the Hudson River to New Jersey, where it would be at least somewhat more difficult for Trust detectives to muscle out the competition. Film producer Mark Dintenfass was one of the first to make the leap, setting up his Champion Studios in Fort Lee, NJ, which kicked off a movie boom as other producers soon made the same move, all of which explains the title of the new documentary, “The Champion: A Story of America's First Film Town” (2015).

Produced by the Fort Lee Film Commission, directed by Marc J. Perez, and based on the book “Fort Lee, the Film Town” by Richard Koszarski, this sleek 35-minute documentary tells the story of the rise and fall of this pre-Hollywood movie mecca and the colorful personalities who flocked to it, and then soon fled. The list includes Florence Lawrence, often described as the first American actress to be studio-marketed by name; Theda Bara, who first vamped world audiences from Fort Lee; and trailblazer Alice Guy Blache, the first woman to run an American studio (Solax). Future Hollywood moguls such as Mack Sennett and D.W. Griffith filmed in Fort Lee as well.

Dintenfass's Champion cranked out a series of Westerns and Civil War pictures for a few years, before falling to local competition. The documentary, largely filmed on Fort Lee locations, vividly evokes the specific spaces of this old boom town, from Rambo's Hotel on the main street to the steep Palisades nearby which would provide the backdrop for many of the earliest (literal) cliffhangers. The Fort Lee boom wouldn't last long, petering out due to a host of factors: the waning of the Edison Trust's powers, war-time shortages, a flu pandemic that hit the northeast particularly hard, and, of course, the rise of Hollywood, California. But during its brief peak, the town still produced a plethora of significant early films.

Even with its short running time, “The Champion” pauses to mourn Fort Lee's fall from glory (as “the first film town” anyway) and particularly the degree to which even locals, let alone the rest of the world, have largely forgotten its movie history. Never fear. This sharp, engaging, and informative documentary brings this vital story back to life with passion and clarity, and once you've seen it, you'll never forget about Fort Lee's role in the formative years of the industry.

Still, at just 35-minutes, “The Champion” might be a tough sell as a stand-alone disc, but you may not be aware that this a Milestone Films release. And the name Milestone guarantees not just supreme quality but also a comprehensive roster of supplemental features on any release, and in this case, enough to expand “The Champion” into a 2-disc set.

Milestone has, in keeping with its glorious tradition, included not one, not two, not... aw heck, they've included nine additional films, all of which are accompanied by new scores.

DISC ONE includes the main documentary feature, “The Champion” along with six other films.

“The Indian Land Grab” (1910, 11 min.) tells the story of an Indian leader who petitions the federal government not to seize his tribe's land. You might groan a bit at the prospect of a film from this era depicting Native Americans, but the film portrays them as the aggrieved party out for justice and even takes time out for the Indian leader to fall in love with the daughter of a legislator which, according to the notes included with this set, generated controversy at the time.

“A Daughter of Dixie” (1911, 10 min.) presents viewers with an innocent, true-hearted Southern belle whose loyalties are torn when her brother joins the Confederacy and her boyfriend joins the Union. It's no masterpiece, but at least it doesn't indulge mindlessly in the pro-Confederacy nostalgia that was the coin of the realm in so much early cinema.

“Not Like Other Girls” (1912, 9 min.) was shot for Universal Victor, a studio built primarily around Florence Lawrence, often called America's first named movie star. This was a bit of a thrill for me as I've actually lectured on Florence Lawrence without ever seeing a full movie with her before. Lawrence plays another true-hearted heroine who proves she doesn't love her beau just for his money. The movie is predictable fluff, but I give a big thumbs up to F-Law.

“Flo's Discipline” (1912, 11 min.) is another Florence Lawrence vehicle that is, alas, not as saucy as its title teases. Lawrence plays a teacher tasked with taming an unruly boys' school which requires a good deal of ingenuity and assertiveness on her part. Lawrence is no shrinking violet here, and the movie is a lot of fun.

“Marked Cards” (1913, 10 min.) was one of the last of Champion's films and it doesn't do much to argue that the brand should have continued. A banker gets ripped off in a crooked card game and seeks revenge in a rather half-baked manner. It's much hard-boiled then the other films on the disc, but not particularly successful.

The sixth extra film on Disc One is yet another documentary about Fort Lee. “Ghost Town: The Story of Fort Lee” (1935, 17 min.) adopts a full elegy mode little more than a decade after Fort Lee's boom went bust. Produced by New Jersey film buff Theodore Huff, it positions the collapse of “America's first film town” as a cautionary tale for a society built on the boom-bust cycle, the future ruins of capitalism visible in the ruins of Fort Lee's film studios. It's quite moving, and seems like a clear inspiration for “The Champion.”

DISC TWO offers three silent films also shot in Fort Lee, though not specifically for or at Champion. 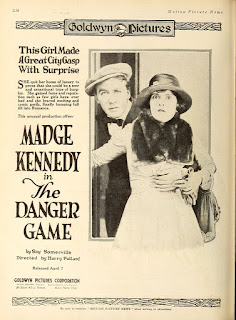 “The Danger Game” (1918, 61 min.) is an early Samuel Goldwyn production, directed by Harry Pollard and starring Madge Kennedy, a Broadway comedienne then making the jump to the suddenly (somewhat) legitimate big screen. Kennedy plays Clytie Rogers, a sheltered young woman of privilege who fancies herself the next great American novelist. When her first book (published largely because of her well-connected father) is panned by a critic who accuses her of being too naïve to write convincingly about the world, she vows to prove she can commit to a life of crime. Hilarity ensues. The film adopts an ambivalent if not outright condescending view of the liberated post-war American woman, but Kennedy (perhaps best known to '50s audiences as Aunt Martha on “Leave it to Beaver”) is a game performer who throws herself headfirst into a series of challenges.

“A Grocery Clerk's Romance” (1912, 8 min.) is an early Keystone Comedy directed by Mack Sennett which was shot at Rambo's Hotel in Fort Lee. It's not quite as zany or kinetic as more familiar Keystone comedies, but it's got plenty of pizazz, not to mention bombs and quickie marriages. Starring Ford Sterling.

“Robin Hood” (1912, 31 min.) was shot at Eclair Studios, one of the most successful outfits to set up shop in Fort Lee. At a half hour in length and with some elaborate action sequences, it was a fairly ambitious undertaking for its time that remains quite compelling more than a century later. 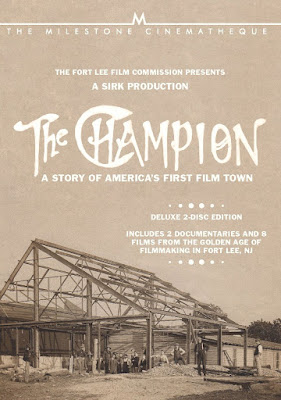 Video:
Obviously, with ten total films released as much as a century apart, the video quality varies considerably. I'll just note that “The Danger Game” required the most extensive restoration and is still missing some footage (replaced with stills here) and is at its most perilous state of decay in the first reel. It's amazing that the film survives at all, and the restoration to reach its current presentable state has been quite extensive, more heroic work from our great film restoration experts.

Audio:
Each of the silent films is accompanied by a new score. All of the films aside from “The Champion” on Disc One have music by Ben Model. “The Danger Game” has music by Donald Sosin. “A Grocery Clerk's Romance” and “Robin Hood” are accompanied with music compiled by Rodney Sauer and performed by the Mont Alto Motion Picture Orchestra.

Extras:
The “extras” are all described above. The only additional extra is the slim inert booklet with summaries and historical background for each of the films includes in this two-disc set.

Final Thoughts:
“The Champion” is yet another lovingly and meticulously curated release from Milestone Films, telling a vital and largely forgotten story about the formative days of the American film industry. The inclusion of a cornucopia of silent films, many never previously released on DVD and some painstakingly restored here, is a source of celebration for any true film lover. Plus you get two Florence Lawrences!
Posted by Christopher Long at 8:41 PM