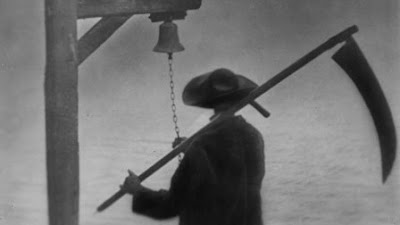 
(The following is a substantially revised version of the review I wrote back in 2008 on the occasion of Criterion's DVD release of “Vampyr.” Video, Audio, and Extras sections refer, of course, to Criterion's 2017 Blu-ray release. Images embedded in this review are NOT taken from the Blu-ray itself.)

Carl Theodor Dreyer's “Vampyr” (1932) shares several traits in common with Jacques Tati's “Trafic” (1971), also released by Criterion this month (Ed. Note: Criterion released both films on DVD in July 2008). Both films were intended to be more commercially viable follow-ups to box-office failures; respectively, “The Passion of Joan of Arc” (1928) and “Playtime” (1967). Both of those prior “failures” happen to be among the greatest films of all-time, each being comfortably ensconced in my personal top twenty, their box-office failure a testament to the failure of audiences (and maybe distributors, too).

Another similarity merits further discussion. Both “Vampyr” and “Trafic” feature idiosyncratic, elaborate sound designs which distinguish them sharply from most other films. When I initially wrote this review, I described both movies as “feeling like silent films” which was not terribly accurate. “Trafic,” like all Tati films, tells its story largely without words, while relying on the dense mix of sound effects and music to create a hermetic pocket universe. Tati-world resembles no other, but silent cinema it is not.

“Vampyr” also enjoys an otherworldly quality due in no small part to its sound design, but Dreyer didn't intend this from the get go. Dreyer, already one of the great masters of silent cinema, was somewhat reluctantly shooting his first sound project and had little interest in adapting his style, refined while working as a de facto independent filmmaker within the studio system. He shot the entire film without sound, and only recorded sound effects and voices (in three separate languages: German, English, and French) in post-production.

With the need for heavy blimps to muffle the noise from loud camera motors and microphones with limited range, the cameras on many (though most certainly not all) early sound films were often anchored in place. Unburdened by synchronized sound, however, Dreyer's camera remained free to glide wherever he willed it to go, roaming alongside and well ahead of intrepid adventurer/ghost hunter Allan Gray (Julien West) on his rambling supernatural journey. The tinny voices and exotic animal sounds (produced by local performers, not clipped from a sound library) combine with the gracefully untethered camera to lend the film a genuinely uncanny feel, a feel both perfectly suited to its pulpy material and all but unique to Dreyer's hybrid silent/sound film.

“Vampyr” loosely adapts two short stories by Irish author Sheridan le Fanu, situating protagonist Allan Gray in a world with all the stock elements now familiar to the vampire genre, a genre which had enjoyed a mini-boom in literature and on the stage but had only made a minimal impact on cinema. Allan Gray materializes out of the fog with virtually no back story. During his “aimless wanderings” he happens upon an isolated seaside inn. A strange man, also appearing without warning, wanders into Gray's room and cries out, “She must not die!” Gray soon discovers that this man's daughter, Leone (Sybille Schmitz), teeters on the brink of death, plagued by strange bite marks on her neck, while a creepy doctor (Jan Hieronimko) provides her dubious care. You know where this one's going, but most 1932 audiences probably didn't. 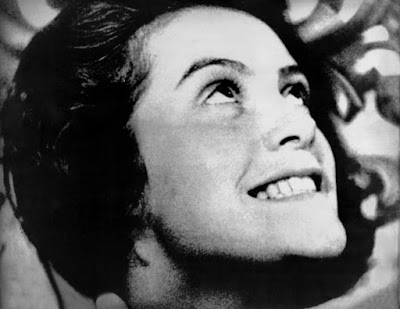 Gray, unable to sleep, wanders through the inn at night and then to the abandoned house out back where he encounters an array of spooky sights and sounds. Shadows dart across the moors, one appears to be “undigging” a grave, another peg-legged shadow moves independently of its more human (?) counterpart.

Gray does little but gawk at these supernatural displays, sometimes appearing to have no reaction at all. This is partly attributable to the fact that lead Julian West is really Baron Nicolas de Gunzburg, a non-professional actor who agreed to finance the film only if he got to star in it was well. His Allan Gray is bizarrely passive, which might sound like a flaw, but only further contributes to the unnerving quality and free-floating anxiety of Dreyer's immensely strange film.

And it sure is strange. Dreyer exhibits minimal interest in providing clear match cuts or other expected standards of film grammar (of which he was, let's once again note, already a master), rendering the timeline and especially the screen geography downright confusing and disorienting at times. There is no clear flow from room to room, from one location to another. Gray and other characters wander in and out of shots, which oscillate from point-of-view shots to objective shots, then back again. Is everything being filtered through Gray's perception, or have we entered a netherworld where the rules of time and space and logic simply don't apply? It doesn't become any clearer on multiple viewings, one of many reasons “Vampyr” is one of the most enjoyable horror films ever made.

At least one aspect of “Vampyr” is crystal clear. It features one of the greatest sequences in the history of horror film and, for that matter, in all of cinema. It's the sequence in which Gray imagines his own death and there's really no way to do it justice in mere words, so I'll let you discover it for yourself. I'll just say that I first watched it about fifteen years ago, and it still gives me chills just to think about it. That view through the window in the coffin...

That reminds me. I've made it this deep into the review without even mention the titular “Vampyr,” haven't I? Oh well, you'll have to discover that for yourself as well. If you dare! 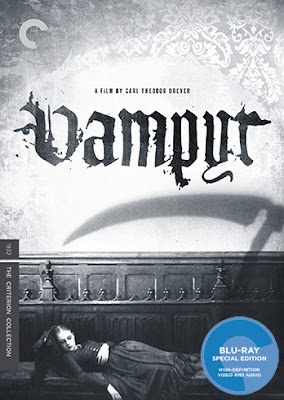 Video:
This version of “Vampyr” is based on a 1998 restoration by Martin Koerber, as was Criterion's 2008 DVD release. This 1080p transfer still shows the scratches and other damage visible from the film's very old source print, but they seem less prominent in parts on this high-def upgrade. Overall, the image quality is quite sharp with an appropriately grain feel that's only occasionally a bit washed out due to likely boosting necessary to buff the image. The old DVD looked pretty darn good, but this 1080p transfer is a meaningful improvement for a film that more deserves the very best.

The film is presented in its original 1.19:1 “pillar-boxed' aspect ratio, a ratio only common for a few of the early years of sound cinema.

Audio:
The film is presented with a linear PCM mono sound track. I can't say I notice a huge difference from the old SD Dolby Digital mono mix, but it's a bit sharper and still preserves that tinny, haunted quality so crucial to the film's success. Optional English subtitles support the German audio.

Extras:
This Blu-ray imports all of the extras from the 2008 SD release with no new features added. However, the Blu-ray is now a single disc compared to the old 2-disc DVD release.

The film is accompanied by a 2008 commentary track by film scholar Tony Rayns. Rayns is one of the very best in the game and his commentary is packed with information and analysis and is riveting from start to finish.

Criterion has also included as “English Text” version of the film. As mentioned above, Dreyer shot in three languages. Though it's a sound film, he also includes silent-style title cards and this “alternate” version includes English text for those title cards instead of the German text in the more common version. The film is otherwise just about the same.

“Carl Th. Dreyer” (30 min.) is a 1966 documentary directed by Jorgen Roos on the occasion of the release of Dreyer's final film, “Gertrud” (1964). It touches on his pre-“Joan of Arc” career, which many Dreyer fans might not know as much about.

I greatly enjoyed the “Visual Essay” (2008, 36 min.) by film scholar Casper Tybjerg. Tybjerg discusses many of Dreyer's influences and also analyzes stills and clips, including some material removed by censors.

We also get a 1958 radio broadcast (23 min.) in which Dreyer reads an essay about film-making.

The Blu-ray is stored in a keep case which is tucked into a slip case alongside a very thick booklet, reproduced from the 2008 release. This very thick booklet includes the film's screenplay by Dreyer and writer Christien Jul along with Sheridan Le Fanu's short story “Carmilla” (1872), one of the sources from which “Vampyr” was loosely adapted. “Carmilla” is one of the classic pre-“Dracula” vampire stories and also features a lesbian subtext (more text than subtext, really) that Dreyer omitted from the film.

In addition to this additional booklet, Criterion has also included a more typical insert booklet, tucked into the keepcase along with the disc, which includes an essay by critic Mark Le Fanu, an essay by novelist Kim Newman, and an essay by Martin Koerber about the film's 1998 restoration. The booklet also includes a short interview with actor/financier Baron Nicolas de Gunburg, originally published in 1964.

Final Thoughts:
I used to think “Vampyr” was a great film, and certainly a unique entry in the horror genre, but clearly not on par with Dreyer masterpieces such as “The Passion of Joan of Arc” and “Day of Wrath” (1943). Now I see it as one of his most audacious and formally daring films, and quite possibly the best horror film ever made by anyone other than Stanley Kubrick. This Blu-ray upgrade more than does justice to Dreyer's remarkable and unparalleled achievement, and kudos to Criterion for once again including the marvelous supplemental booklet with both script and Sheridan Le Fanu story, a nice bonus for an already impressive package.
Posted by Christopher Long at 11:48 AM