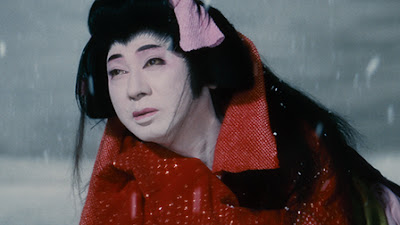 
After director Kon Ichikawa ran over budget on several films, his studio saddled him with the unpleasant task of remaking a creaky, cliched revenge movie from the 1930s. Ichikawa responded by transforming the hoary material into a daring, borderline-lunatic, visionary triumph no other filmmaker could have achieved. “An Actor's Revenge” (1963) scores another victory for the auteur theory.

Set in 19th century Edo (now Tokyo), the film opens with a kabuki performance, as rising star Yukinojo (Kazuo Hasegawa) dazzles the crowd as an onnagata, a man who exclusively performs female roles. Like so many shots in the film, the kabuki stage is shrouded almost entirely in darkness, with just Yukinojo visible and radiant in the center. He soon realizes that the audience contains people who wronged his family in the past (a sordid story that will gradually be revealed) and, like a pro, he continues his performance while also plotting his revenge.

Ichikawa showcases his elaborate design plans in this opening sequence of a film that seamlessly combines techniques both hyper-modern and archaic. Each of Yukinojo's intended victims is framed in an insert shot within the frame, hovering above the darkened stage, a device right out of the silent era. A fight shortly afterward takes place in near-total darkness with every inch of the film's widescreen 'scope frame exploited to its fullest. The balance of kinetic explosions and stasis, the contrast of vibrant colors and darkness, and the deployment of huge swathes of negative space lends the film a look and feel that might be described as psychedelic, yet not quite. Phantasmagoric? No, not that either. It's... unique, and simply defies adequate description.

For all the impressive visual flourishes, no effect dazzles as much as the performance of 55-year-old actor Kazuo Hasegawa, who actually performed the same role about thirty years earlier. He certainly hasn't lost his knack for the character. As a consummate professional, Yukinojo remains in onnagata character off-stage as well as on, and the gender ambiguity spices up the film considerably. Wearing a long, flowing dress, his eyes cast down demurely, Yukinojo speaks softly, moves delicately, yet pushes implacably towards his goal, reluctant but always ready to unleash a brutal flurry when forced to flaunt his training as a swordfighter.

The adapted script by Natto Wada (Ichikawa's wife, and writer of the director's masterpieces “The Burmese Harp” and “Fires on the Plain,” among others) features a plot as complex and disorienting as the film's visual design. The numerous twists revolve around the intoxicating effect the androgynous Yukinojo has on his audience, as everyone becomes besotted with him in some fashion, including a beautiful courtesan (Ayako Wakao), a brazen pickpocket (Fujiko Yamamoto), and even another character played by... Kazuo Hasegawa!

Yukinojo's ultimate revenge is truly an actor's revenge, enabled by his ability to assume a series of impromptu roles and to convince numerous people they're getting what they want from him while, in fact, he's playing them all for fools. He doubts himself constantly, and practically begs to be set free for his vow for revenge before doubling his resolve to see it all through to the gory end. The revenge genre has never seen a protagonist quite like Yukinojo. 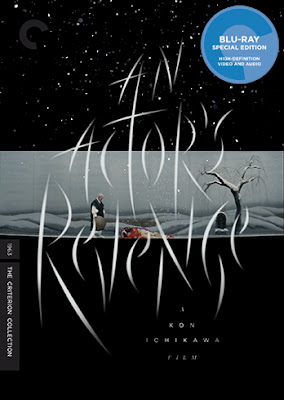 Video:
The film is presented in its glorious original 2.39:1 widescreen aspect ratio. From the Criterion booklet: “This new digital restoration was undertaken from a 4K scan of the 35 mm original camera negative by Kadokawa Corporation at Imagica in Tokyo.” This 1080p transfer is impressive in the usual Criterion way, featuring rich colors and sharp image quality throughout along with a pleasantly grainy look. Setsuo Kobayashi's cinematography is sensational, particularly when focusing on single figures and details against inky black backgrounds, and this restored high-def transfer does his work justice. It's gorgeous.

Audio:
The linear PCM mono audio track is crisp with no noticeable dropoffs and if it sounds relatively flat, it's supposed to. Both evocative sound effects and the moody score by Yasushi Akutagawa and Masao Yagi are treated well here. Optional English subtitles support the Japanese audio.

Extras:
Criterion has included a few interesting extras for this Blu-ray release.

First, we get a lengthy (58 min.) 1999 interview with director Kon Ichikawa conducted for the Directors Guild of Japan, and recorded at his home. Interviewer Yuki Mori isn't shy about fawning over the master, but this is an engaging visit with Ichikawa, still sharp and robust in his 80s.

The disc also includes a new interview with critic and filmmaker Tony Rayns (13 min.) who examines the themes and visual style of the film. Rayns always brings his A-game to any features he's involved with and he provides a comprehensive discussion of the film and several of its players in a brief running time.

The insert booklet includes an essay by film critic Michael Sragow and a 1955 article by Ichikawa discussing his work in widescreen scope formats.

Final Thoughts:
From the very opening scene of “An Actor's Revenge,” you can tell you're in the hands of a master director. The film is so inventive, so dazzling, the viewing experience can even be a bit overwhelming. Ichikawa goes all in, and comes out with a unique masterpiece for the ages. Criterion's release isn't packed with extras, but offers a strong transfer of a truly great film that not enough people have seen.
Posted by Christopher Long at 12:26 PM