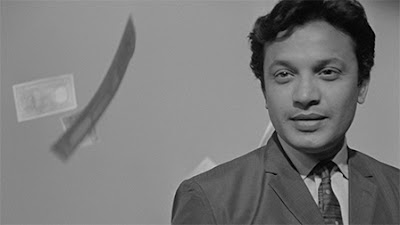 
I continue to be astonished by Satyajit Ray's ability to breathe life into his characters in the space of a single shot; one line delivery or a quick facial expression provides instant access to a fully-fleshed personality. Ray's films are replete with people whose existence seems to preceded and extend past their time on camera. The viewer simply hitches a ride with them for a few minutes before they move on to other things.

In “The Hero” (1966), matinee idol Arindam Mukherjee (played by the most popular of all Bengali stars, Uttam Kumar) hops a train from Kolkata to Delhi to accept a prize. Within ten minutes of his arrival on the train, writer/director Ray sets a half dozen multi-layered characters into action. Each reacts in some fashion to Mukherjee's presence, yet each character follows their own agenda, all embracing the maxim that everyone considers themselves the main character in the story.

Aditi Sengupta (Sharmila Tagore) edits a magazine called “Modern Woman” and wrestles over whether to interview the star to boost sales or to keep her journal free of superficial movie gossip. Her smitten friend shyly eyes Mukherjee from a distance, giddily recounting his numerous heroic roles. Representing the skeptics, the elderly Mr. Chatterjee (Jogesh Chatterjee) takes every possible opportunity to lecture the actor about the failures of talking pictures, as well as the scientifically established fact that all movie stars are notorious drunks.

Arindam, in an unusually introspective mood after a personal crisis, greets everyone's advances with grace and a sense of detached amusement. In an obvious nod to Marcello Mastroianni's character from “8 1/2” he relies on his handsome looks, his winning smile, and his tinted sunglasses to keep the world at a distance, though Aditi's capacity to listen attentively in a non-judgmental fashion will eventually break through his defenses.

Kumar was a mega-wattage star of the Bengali cinema at the peak of his nearly unparalleled fame, and this was the first time Ray worked with such a commercial juggernaut. The casting prompted some critics to suggest the esteemed arthouse director of “The Apu Trilogy” (1955-59) and “The Music Room” (1958) was selling out, but Ray instead uses the opportunity to muse on his own relationship with actors and with cinema. Viewers should not assume the writer/director agrees with lines such as “A film actor is nothing but a puppet” but there's little doubt that Ray, also an accomplished novelist, composer, and illustrator, is working out some issues with his cinematic work while also poking fun at a mainstream industry that never quite found room for his brand of “alternative” cinema.

Furthering the film's apparent connection to Fellini, Ray presents a series of dreams and flashbacks, the most prominent being a sequence in which Arindam drowns in pools of money, reaching out for a hand that won't quite save him. I find these moments somewhat stilted and unconvincing, and far less satisfying than the rest of the film, though it's possible I am also locked into an overly specific view of what a Satyajit Ray film is “supposed” to look like. Also, I can't stand those scenes in Fellini's films either.

Kumar is utterly charming throughout, and if he's functioning as Ray's “puppet” he's certainly a convincing one, fully invested in the moment just like every Ray performer always seems to be. Sharmila Tagore is a revelation as well. Just seven years after playing the very young bride in “The World of Apu” (1959), she's now (literally, from the title of her magazine) a modern woman who more than holds her own when sharing the screen with a commercial superstar.

Whether or not Arindam really changes by the time the train pulls into Delhi is an open question, but it's certainly been quite a ride both the characters and the viewer. 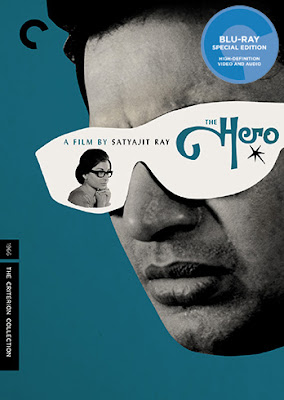 Video:
The film is presented in its original 1.33:1 aspect ratio. From the Criterion booklet: “This new digital master was produced from a restoration undertaken by RDB Entertainments under the supervision of Kamal Bansal and Varsha Banal. For the restoration, a digital transfer was created in 2K resolution on an ARRISCAN film scanner from the 35 mm original camera negative and a 35 mm print at Pixion in Chennai, India.”

The image quality and black-and-white contrast are sharp in this 1080p transfer, with a generally bright look throughout. Another strong effort from Criterion.

Extras:
Criterion has only included a few extras here, though they're both good.

First up is a 2008 interview (12 min.) with Sharmila Tagore, who doesn't appear to age like other people. She talks about her experiences working with Ray and her progression from child actor to adult actor under Ray's mentorship.

We also get a new interview (25 min.) with film scholar Meheli Sen, who talks in detail about the film's production and reception (it wasn't a hit like many of Ray's earlier films) as well as the unique status star Uttam Kumar had in Bengali film.

The insert booklet includes an essay by author Pico Iyer and a transcript of Satyajit Ray's comments at a 1980 commemorative gathering after Uttam Kumar's death.

Final Thoughts:
I don't think “The Hero” ranks as one of Ray's greatest accomplishments, but a middling Ray film towers over most of the competition. This Criterion releases only offers a few brief extras, but the transfer is strong, and if they feel like eventually releasing every single Ray title as part of the collection, I won't have any objections.

Posted by Christopher Long at 4:57 PM