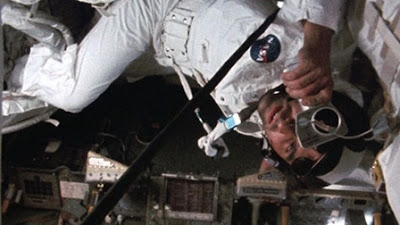 
If somebody tells you they just don’t understand what the big deal about space travel is, you probably won’t be able to explain it to them. And you probably don't want to bother because, really, do you need to hang out with a person who would say something like that? If you want to try anyway, though, point them to Al Reinert’s sublime archival footage documentary “For All Mankind” (1989.)

The Gemini and Apollo missions were filmed by some of the most advanced cameras available at the time, but not because the NASA crews were budding Sacha Viernys. The cameras were there to film moon rocks and moon dust and, um, other moon-related things. Did I mention moon rocks? This wasn’t art photography, this was for science with a few brief clips circulated to the media.

The majority of the mission footage not only went unseen by the public but was stored away in the NASA film archives possibly never to be looked at again. But journalist Al Reinert experienced a “Thus Spoke Zarathustra”-style epiphany, realizing that those millions of feet of cold-stored film contained a cinematic treasure trove. After years of meticulously combing through the archives, culling and editing the best material, Reinert produced one of the most beautiful American documentaries of the past thirty years. 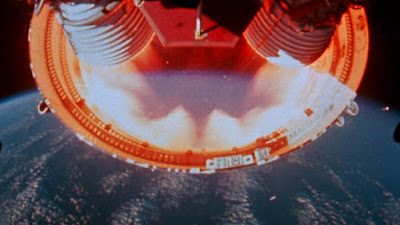 Reinert wasn’t interested in making the kind of dry, didactic documentary school kids pretend to listen to on a trip to the planetarium. Working in the 1980s, he had the opportunity to look back on the entirety of humanity’s efforts to reach the moon and to appreciate the entire arc of the greatest exploration story ever told, and the film would be the story of that grand adventure.

Reinert, along with editor Susan Korda, who had one hell of a job on her hands, cobbled together footage from a half dozen different Apollo missions and, I believe, a little bit from Gemini (if I’m wrong, someone will tell me) and presented them as a single trip to the moon. This trip includes not only footage taken from space and on the moon, but also of the crew working back in Houston, and it’s the counter-cutting between these two that creates the illusion of a single trip from many.

This wasn’t a cheat by Reinert, but a truly inspired decision (cue the opening drum beats of “Zarathustra” again) that does justice both to the extraordinary beauty of the footage and to the communal spirit that united hundreds of men and women, galvanized by an edict from John F. Kennedy, in the pursuit of a single goal, the achievement of a dream so absurd that even believing it possible was an act of unmitigated audacity.

Reinert also recorded many hours of audio interviews with the astronauts and their commentary is interspersed throughout the film. They aren’t identified individually when they speak and it’s pretty hard to tell them apart in those lumpy uniforms too. These are the men of Apollo, the men who reached for the moon and, in some cases, got there. Blu-ray viewers have the option of choosing an alternate audio track that provides on-screen identification of each person we see and hear which is nice to have even if it somewhat undermines the triumphant universal spirit of a film intended “For All Mankind.” 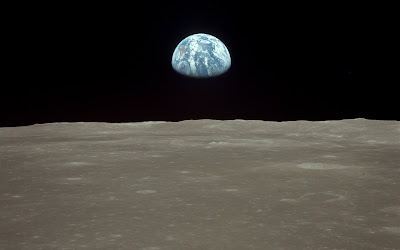 Much of the “throwaway” footage turns out to the most exciting material. In addition to the installed NASA cameras, astronauts were given their own hand-held cameras and a limited amount of film. They usually chose to point it outside to ogle at the Earth visible as one big blue globe, but the more prosaic footage is indispensable too. Watching an astronaut eating ham spread in zero gravity tells more about life in space than even the most majestic, jaw-droppingly beautiful space shots. Contemporary astro-fans spoiled by Chris Hadfield's recent odyssey might take this kind of access for granted, but I will always see it as something special.

The most joyous moment in the film comes when Gene Cernan of Apollo 17 (the last mission to land on the moon) begins to sing “I was strolling on the moon one day in the merry merry month of… December.” Fellow moonwalker Harrison Schmitt says “No… May.” (Cernan was right, but Schmitt obviously cared more about meter and rhyme than historical accuracy.) The camera shows the two men skipping along the moon surface like a couple of schoolkids. Cernan forgets the lyrics, then expresses the whole reason for a lifetime of grueling training, of striving for the heavens: “Boy is this a neat way to travel. Isn’t it great? Dum dee dum dum dum.” Reinert then shows a series of shots of astronauts hopping around on the moon. You wouldn’t know it but he’s actually cutting back between two different landings. Apparently, grown men all tend to act the same on the moon. One astronaut in mid-leap shouts “Ya-hoo!” If you’re not smiling while you watch that, you’ve obviously never dreamed.

NASA didn’t send the cameras up there to bring images of America’s heroes playing hopscotch on the taxpayer’s dime, but they got them anyway, and they’re every bit as compelling as the far more famous footage of Neil Armstrong descending the ladder and taking that small step that became a giant leap for mankind. Thank goodness Al Reinert and his team found these wonderful pictures and sounds and had the sense and the artistic vision to transform them into this sublime, mesmerizing documentary. 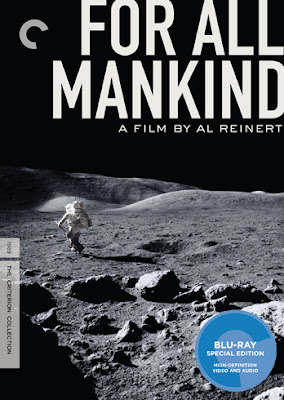 Video:
The film is presented in its original 1.33:1 aspect ratio. The image is windowboxed like most Criterion fullscreen releases - some viewers will see a black frame around the whole image.

The entire movie is composed of various archival sources, much of which is 16 mm, so the image quality varies and is generally very grainy and a little muddy. Forgive them, they weren’t able to set up the lighting equipment exactly the way they wanted.

Audio:
The Blu-ray is presented with a DTS-HD Master Audio 5.1 track. Some of the audio comments by the astronauts sound a bit tinny and garbled at times but that’s an artifact from Reinert’s recorded interviews with them. It all sounds clear enough. The stereo comes into play mostly with the louder rocket engine sounds. The original score by Brian Eno is well-presented.

Optional English subtitles are provided. As mentioned above, you can also choose to watch with subtitles and identifications of each of the speakers and missions being shown. I chose to watch this way but for the pure audio-visual experience of the film, which was not released with any background information or identifications, you might prefer to save this option for a second viewing.

Extras:
The film is accompanied by a commentary track by Al Reinert and astronaut Gene Cernan, recorded in 1999 for the first Criterion release of this film on SD.

“An Accidental Gift” (32 min) is an excellent feature that recounts Reinert’s journey through the NASA archives and his labor of love while assembling the film. NASA archivists Morris Williams and Mike Gentry also speak about their jobs and their role in helping get the film made.

“On Camera” (20 min.) is an assemblage of multiple interviews of Apollo astronauts conducted by Reinert over several projects and cut together into one feature here.

“Paintings from the Moon” provides a series of paintings by astronaut Alan Bean of Apollo 12, the fourth man to walk on the moon. He provides an introduction (7 min) and then commentary for each of his 24 paintings presented here (37 min. total.)

“NASA Audio Highlights” includes 21 short audio recordings that were widely circulated to media outlets at the time and are mostly familiar to fans of the space program. You do know “The Eagle has landed,” right? 7 minutes total.

The insert booklet features a justifiably gushing appreciation by critic Terrence Rafferty and an essay by Al Reinert.

Film Value:
There are so many moments to cherish in this film, and I’ve only been able to discuss a few of them. I love the fact that the astronauts were each allowed to bring a cassette tape on the mission with music of their choosing. The astronauts went a little bit country and a little bit rock and roll. And “Zarathustra” too. You have to go “Zarathustra” if you’re ever flying in space.

Criterion re-released “For All Mankind” on the occasion of the 40th anniversary of the moon landing back in 2009 but also as a testament to one of the human race’s finest achievements. Will we ever dream so big again? Mars is calling, but I have my doubts that we’ll ever get there. But if we do, you know the cameras will be running and it will make the amazing images New Horizons has been sending back from Pluto look... well, actually nothing could make those images from Pluto look anything but spectacular. But the Mars pics will be a blast too.
Posted by Christopher Long at 10:38 AM