Director Bruno Dumont was frequently likened to Robert Bresson early in his career. This comparison may have been overblown, not to mention lazy, but Dumont's debut film “La Vie de Jesus” (“The Life of Jesus”,1997) does remind me of a specific scene in Bresson's “L'argent” (1983).

At the end of Bresson's magnificent final film, a crowd of townsfolk gather outside a restaurant to watch as a notorious ax murderer is led out by police. When he's finally paraded by, they barely notice and keep looking, still waiting for... what? A REAL ax murderer, perhaps? Maybe one who actually looks like the blood-soaked monster who just chopped a kindly family to bits for no apparent reason, and not that harmless kid the cops just guided past them. You mean that was him? You can't be serious.

The protagonist of “La Vie de Jesus” is as seemingly innocuous as can be. Freddy (David Douche, a non-professional actor like the rest of the cast) is a teenager in a small rural town in France (Bailleul, near the Belgian border) who likes to ride his motor scooter, hang out with his do-nothing friends, and who especially likes to make love to his devoted girlfriend Marie (Marjorie Cottreel). Freddy still lives with his attentive mother (Genevieve Cottreel) who makes sure he gets to his frequent hospital appointments where doctors monitor his epilepsy. Nothing much happens. Freddy just whiles away one listless day after another on the path to nowhere, just like everyone else in town. Bored, alienated, mostly harmless, Freddy is just the young man next door. Which is the scary part.

Dumont roots his filmmaking firmly in the physical world (the movie generated some controversy for its close-up depiction of sexual penetration) and a sense of place. From the instant Freddy falls face first off his bike onto the hard dirt ground, he is directly linked to his bleak environment. Dumont frequently cuts away from characters just hanging out to shots of the countryside, or to the clouds drifting by, perhaps reminding viewers of possibilities the unimaginative, earthbound characters fail to notice. These brief moments of sublime beauty startle, but still fail to break up either the monotony or the deepening gloom.

Once Kader (Kader Chaatouf), a young man who appears to be of North African heritage and is labeled an “Arab” by locals, begins to show interest in Marie, Freddy finally discovers an outlet for the resentment he had previously turned impotently against a body that betrays him and a town that provides no opportunities. Long free-floating bitterness crystallizes into rage which eventually erupts into murder, leading to an enigmatic final sequence as Freddy, now a killer just escaped from police, thrashes shirtless in the grass and finally takes a good long look at the sky Dumont's camera has shown us before. He sits upright, a tear trailing down his cheek.

An extension of the Bresson comparison might encourage a reading of this ending as a moment of redemption or grace, though not so much if we're talking late-Bresson like “L'argent.” But Dumont offers no obvious cue to viewers in this final shot. It certainly doesn't appear to be a plea for sympathy (aw, gee, that poor racist murderer Freddy) and isn't necessarily even an insight into Freddy's burgeoning inner life. Perhaps it's an acknowledgment that real people are too complex to be expressed in anything like a traditional character arc. 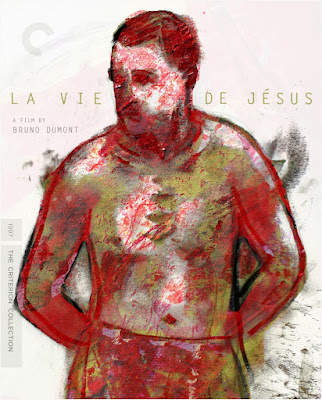 Video:
The film is presented in its original 2.35:1 aspect ratio. From the Criterion booklet: “The new 4k digital restoration was undertaken from the 35 mm original camera negative at Eclair in Vanves, France.”

I understand some previous DVD releases have been underwhelming and suffered from yellow tinting. I don't own those as comparison points, but this 4K restoration looks fantastic in Criterion's 1080p transfer. Image quality is sharp throughout, as is contrast. Everything looks great in motion. Nothing to complain about at all.

Audio:
The LPCM 2.0 stereo mix is crisp if not particularly robust. It's not called on to do all that much, and does it well. Optional English subtitles support the French audio.

Extras:
Criterion has only included a few extras with the first Dumont film in their collection.

We get an interview with Dumont (16 min.) in which he discusses how his philosophy studies influenced his first feature. He believes we don't need any more films that entertain us, we need films that awaken us instead.

Final Thoughts:
I'll be honest. I'm not sure yet what to make of Bruno Dumont's debut film. Perhaps it would help if I had seen more than just one other Dumont (“Camille Claudel 1915” - which I liked a lot). All I know is I'm still thinking about it a week after first seeing it.

Criterion's Blu-ray release doesn't include many extras, but you get a too-notch high-def transfer and an introduction to a filmmaker whose critical reputation has grown considerably in the past twenty years. He's one of John Waters' favorite contemporary directors, which is pretty neat seeing that they're now both in the Criterion Collection.

Posted by Christopher Long at 2:41 PM