Tell Me Who I Am 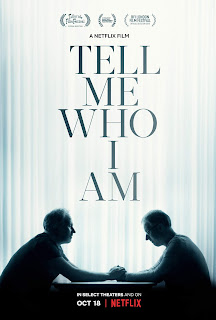 
When 18-year-old Alex Lewis woke up in a hospital bed, he immediately recognized the young man standing faithfully by his side as his twin brother Marcus. As for the woman also in the room, Alex didn't have a clue until Marcus informed him that she was their mother.

It was the beginning of a new pattern for Alex, relying on Marcus to fill him on all the details of a life he no longer remembered as the result of the motorcycle accident that sent him to the hospital. In the first act of director Ed Perkins's documentary “Tell Me Who I Am”(2019), Alex recounts the early months of this reconstruction project, a disorienting and arduous process also laden with moments of humor. Marcus reintroduces Alex to his longtime girlfriend, and the now-adult Alex (54 at the time of filming) jokes that this provided him the unique opportunity to lose his virginity to the same girl twice.

With Marcus's help, Alex gradually readjusts to the family household, run by his disciplinarian father and a vivacious mother who's always the life of the party. Young Alex, having no memories of his own life, let alone anyone else's life as a comparison point, remains largely unaware of how unusual their domestic situation really is, but it doesn't take long before viewers realize there's a dark secret lurking beneath the semi-placid surface. Perhaps the secret is hiding in the upstairs of the house from which the twins are forever banned.

Perkins delays the big reveal for an uncomfortably long stretch, a dramatic technique I sometimes find ethically questionable when filmmakers deal with true stories. In this case, however, the elongation of tension replicates Alex's real experience. For years, he unquestioningly believed everything Marcus told him about their shared lives. After all, if you can't count on your twin brother, who can you trust? Only after their parents died, did Alex come to realize that the normal, happy childhood he now knew about was largely a work of fiction written by his twin.

I'm hesitant to reveal much more. Suffice it to say that while “Tell Me Who I Am” begins with a story remarkable enough just based on the barest facts (twin brothers – one with no memories, one with all their memories), it soon delves into more profound and unnerving territory. Marcus has very good reasons for this seeming betrayal of one of the most intimate trusts one can imagine, so much so that many will see him as a noble figure who makes a tremendous sacrifice as an act of compassion for the person he loves the most. On the other hand, it's not difficult to understand Alex's anger at Marcus. When the only memories you have never really happened, how can you possibly know who you are?

Perkins mostly relies on Alex and Marcus to speak their truths to the camera, each of them filmed separately for the bulk of the movie, though he also shoots some limited recreations, explorations of the dark spaces of the mysterious house, for example. He returns to select images over and over, a technique which pays off in the film's most poignant shot, that of just one of the twins, as boys, sleeping in their shared bedroom, the other bed empty. It's one of the most emotionally potent moments I can recall seeing in a documentary in quite some time.

Alex has to recreate his identity because he lost his memories. Marcus has to (and perhaps wants to) recreate his identity because he no longer has another person who shares his memories. In its brief running time, “Tell Me Who I Am” can barely touch on the immense burdens confronting each of these men, but it presents their stories with grace, clarity, and humility. Nobody who watches this film will ever forget about the Lewis twins.

“Tell Me Who I Am” is currently streaming on Netflix.
Posted by Christopher Long at 3:24 PM