The adjective “poetic” was attached to Josef von Sternberg from the very start of his directorial career, a potential death sentence for an aspiring Hollywood filmmaker. But little about von Sternberg's career was typical.

The plucky teen immigrant (born in Vienna in 1894, emigrated with his family to New York in 1901) dropped out of high school and worked a series of odd jobs, eventually finding his way into film in the pre-Hollywood movie mecca of Fort Lee, NJ where he learned how to splice, edit, write, operate a camera, and virtually every phase of filmmaking. After a few returns to Europe and a stint in the U.S. Army, von Sternberg relocated to Hollywood where he continued to hone his craft in various supporting capacities.

He impressed many in the industry with his vast knowledge of the craft of filmmaking, but he wasn't content to methodically climb the ladder of success. He launched a bold attempt to spring directly into the director's chair, shooting a micro-budget independent film called “The Salvation Hunters” (1925). Praised for its “poetic” qualities and evocative imagery it naturally flopped, but generated buzz all around town and drew attention from no less a luminary than Charlie Chaplin.

Chaplin was impressed by von Sternberg's ability to communicate both story and character psychology in images, and tapped von Sternberg to direct a project for him, though not one in which The Tramp would act. Chaplin was apparently dissatisfied with the result (though he made no public comment) and chose not to release the picture. This would have proved a debilitating setback for many ambitious up-and-comers but the resourceful von Sternberg (the regal “von” was added by a Hollywood publicist, by the way) bounced back quickly.

Within a year, von Sternberg grabbed hold of an unexpected opportunity to direct another film, a gangster picture from a script by the hard-boiled journalist Ben Hecht. Hecht was by far the biggest name attached to the project, but that didn't stop von Sternberg from doing a major rewrite, enraging Hecht who initially demanded his name be removed from the film. Hecht was presumably more sanguine when he received the first-ever Oscar for Best Writing on an Original Picture.

In “Underworld” (1927), George Bancroft plays Bull Weed (I like to think his little brother's name is Dick), a boorish bank robber and gangster who runs into a drunk (Clive Brook) during one of his heists and arbitrarily takes it upon himself to redeem the man, now dubbed Rolls Royce. Bull sets up Rolls with some cash and his own apartment and darn if he doesn't clean up nice. Maybe too nice, as Rolls begins to draw the attention of Bull's lovely girlfriend, Feathers (Evelyn Brent).

It's a pulpy story with seemingly stock characters, but one of the hallmarks of the three films in this set is the surprising nuance with which even minor characters are imbued. Bull is a brute and a loudmouth – even in a silent film you can hear the beefy Bancroft bellowing – but during a protracted scene where he waits to kill a friend in a jealous fit of rage, he stops to feed a kitten by dipping his finger in a milk bottle and letting the kitten lick the drops. Feathers is named for her fondness for wearing feathered boas, but she turns out to be more than just a kitschy gangster's moll when she torments herself over whether to pursue her own happiness or loyalty to a man who helped rescue her from the streets.

“Underworld” turned into a surprise hit with theaters forced to add midnight showings to accommodate demand. It is frequently given credit for kicking off the craze in gangster films, though it's difficult to pinpoint its influence that directly. It certainly made stars of the three leads as well as of von Sternberg, the former boy genius of “Salvation Hunters” now all grown up into a top-line Hollywood powerhouse.

He followed up his break-out with another hit, “The Last Command” (1928), featuring the Swiss-German star Emil Jannings as an aging, enfeebled Hollywood extra cast to play the part of a Russian general in a picture about the Russian Revolution. Shaking with essential tremor, he tells his fellow extras he really was a Russian general, a claim they greet with open mockery, but an extended flashback reveals that he was telling the truth.

Or at least his truth. “The Last Command” (story by Lajos Biro) nests illusions within illusions like a Matryoshka doll, beginning with the opening title cards proclaiming “Hollywood – 1928! The Magic Empire of the Twentieth Century!” Jannings' character is cast to play a general in a movie that no doubt relates, a phony, sanitized version of Russian history, but surely his memory of events told in flashback are just as biased and divorced from reality. When he finally gets to the film set and is asked to pretend to be a general, his potentially fatal mistake is to treat the process as far too real.. Jannings (later a Nazi collaborator, but at this point in time just admired as a great actor) is sensational, a portly, blustering special effect in his own right, and he would win the first-ever Best Actor Oscar. Von Sternberg's mark was all over that inaugural Award ceremony.

In “The Docks of New York” (1928), released just at the end of the silent era, von Sternberg reunited with George Bancroft, who plays Bill, a ship's stoker on leave for one night in New York. He falls for dance-hall girl Mae (Betty Compson) and has to decide which siren call plays loudest for him, the open sea on his next job or the love of a good woman. Hyper-macho Bancroft is utterly convincing as the sweaty, coal-stained stoker who spends all his time around other sweaty, coal-stained men and therefore has no idea how to act around women except in the most straightforward, obvious way (I'm talking sex, people!) But maybe he's enough of a man to learn.

Those trademark character touches create more special moments. Witness the scene where a very impressed Mae ogles Bill's bulging, tattoed forearms with undisguised lust. Or how a seemingly minor supporting player, an ill-treated wife (Olga Baclanova), suddenly takes center stage from Bill and Mae, living out the aphorism that everyone sees themselves as the main character of the story.

Von Sternberg's poetic leanings are on full display in all three films. The heavy chiaroscuro design of “The Docks of New York” (cinematography by Harold Rosson) transforms a single night ashore into a moody character in its own right. Harsh beams of solid light knife through inky blackness, sometimes from lampposts above, sometimes from indoor spaces that erupt into the nighttime outside, promising sanctuary or perhaps threatening a different brand of meance. In other shots, a curtain of hazy, smoke-filled light blankets the background, sealing the docks off from the rest of the world.

Many scenes in these films possess that same hermetic quality. Von Sternberg has a knack for creating secret spaces, faerie ring subcultures that exist only for a moment in time. “Underworld” presents the Gangster's Ball where all the criminals set aside their quarrels for a night of hard-drinking camaraderie. In “The Last Command” a doomed train rumbles through the Russian night, its passengers oblivious to their fate. In “The Docks of New York” the denizens of a seedy bar unite to celebrate a wedding in their own unique style: “One of us! One of us!”

Von Sternberg was at his creative peak and made a seamless transition into the talking picture era, most famously in his films with Marlene Dietrich, starting with “The Blue Angel” (1930). His directorial career would begin to decline by the end of the 1930s and curtailed significantly after World War II. The three films in this set alone are enough to explain why Josef von Sternberg is regarded as a great and true one-of-a-kind artist. 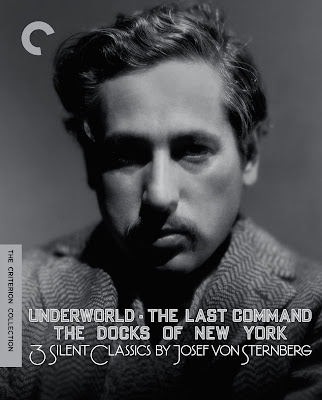 Video:
The films are presented in their original 1.33:1 aspect ratio. I don't own the original 2010 DVD release as a comparison point, but reviews indicate that those were presented in a picture-boxed format which provided a slim black border around the image that was designed so it would look OK on older TV sets. Never mind that. Picture-boxing is dead, and these new high-def transfers are not picture-boxed. The 2K high-def transfers all look fairly strong to me, especially “The Docks of New York” which relies so heavily on chiaroscuro lighting – the black-and-white contrast needs to look sharp and it does.

Audio:
Each of the three silent films in this Criterion boxed set offers listeners the option of two different scores. Robert Israel provided new scores for each movie that were composed specifically for the original 2010 Criterion DVD release of this set. “Underworld” and “The Last Command” also arrive with scores by the Alloy Orchestra, scores composed for festival screenings in the late 2000s. “The Docks of New York” also has a Donald Sosin score that debuted in 2008.

The LPCM mono mix treats all the scores quite well, providing robust, enjoyable listening experiences for all of them. Audio on the extras is solid as well.

Extras:
This Criterion boxed set includes three separate keepcases which are stored in an outer cardboard case, with the square-bound insert booklet tucked alongside the discs. Each film is on a separate Blu-ray in each keepcase.

The extras are relatively modest in this set. All extras are copied from the old 2010 DVD set and no extras have been added for this Blu-ray re-release.

On the “Underworld” disc, we get a 2010 video essay (36 min.) by UCLA film professor Janet Bergstrom. It's jam-packed with information about von Sternberg's early career, and the unusual path he took to directing his break-out gangster hit. Bergstrom finds a way to pack a few hours worth of information into a fairly short running time.

On “The Last Command” we get a 2010 video essay (35 min.) by Tag Gallagher titled “Von Sternberg 'Til 1929” which covers what the title indicates. Gallagher provides more stylistic analysis, tracing out common motifs and themes in all three films included in this set. Because of that, you might not want to watch this until you've seen “The Docks of New York.”

On “The Docks of New York” disc, we get a 40-minute interview with von Sternberg that originally aired on Swedish television in 1968, just a year before the director's death. Von Sternberg wasn't always the most reliable narrator of his own career, but he's always an engaging speaker.

The thick, square-bound insert booklet is attractively designed. It's also loaded, starting with separate essays about each film, by author Geoffrey O'Brien (“Underworld”), film professor Anton Kaes (“The Last Command”) and critic Luc Sante (“The Docks of New York”). The booklet also includes Ben Hecht's original story for “Underworld” as well as a short essay about the film scores included here, and an excerpt from von Sternberg's autobiography concerning working with Emil Jannings.

Final Thoughts:
Fans spoiled by Criterion's jam-packed “Dietrich and Von Sternberg in Hollywood” boxed set from last year might find this Blu-ray upgrade of the old 2010 set somewhat lacking by comparison. Each film is only accompanied by a single extra, but we still get two scores for each movie and the movies themselves are pretty great, which is more than enough to recommend this set.
Posted by Christopher Long at 5:20 PM