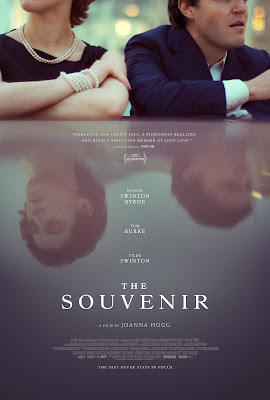 
(I promised myself I'd write about at least a few new releases this year, so here are some quick thoughts about one title I just caught up with.)

The capsule descriptions of Joanna Hogg's “The Souvenir” (2019) seem specifically targeted to driving me away.

“A coming of age story.” Oh Lordy, there must be a good baseball game on somewhere.

“A study of a relationship in crisis.” Maybe this would be a good time to clean the bathroom.

Dialogue heavy, slice of upper-middle-class English life... Hoo boy. I only checked this one out of the library because it happened to sitting right there on the New Release shelf (yes, I still check actual, physical DVDs out of an actual, physical library) staring at me and because I'd read a good deal of persuasive praise about Joanna Hogg's previous films such as “Archipelago” (2010) and “Exhibition” (2013). I'm delighted that I did so.

“The Souvenir” is, at least to some degree, all of the things it was made out to be (though the “graphic nudity” warning tag hardly seems merited), but none of these quick hits touch on the film's idiosyncratic and deceptively complex style. But before delving into that, here's a quick plot summary: The setting is England circa 1983/1984, and Julie (Honor Swinton Byrne) is a 20-ish film school student deep in pre-production (the phase when your film has its best chance of being a masterpiece – before you actually start shooting) on her first feature. While polishing (and polishing and polishing) her script, she meets Anthony (Tom Burke), an apparently suave and wealthy Foreign Office functionary, and they fall in love.

Writer/director Hogg displays virtually no interest in exposition or set up of any kind. The instant Anthony is introduced, it feels as if he's always been there; perhaps because he so quickly becomes an important presence in Julie's life. Their relationship unfolds across discrete spots of time, the narrative leaping forward from one vignette to the next. Julie and Anthony have just met, and one cut later they're together. In the next scene they've been a couple for months, later they've clearly just had an argument, they've broken up, then reunited, etc. Hogg's confidence in her ability to convey a wealth of information with a few brushstrokes extends to her audience, who she trusts to do the work necessary to catch up and fill in the gaps. A bold bet to make, but also an efficient way of self-selecting the right audience for your work.

Much of the negative feedback stems from viewers who claim they don't understand what Julie finds so appealing about Anthony who, as it turns out, is hiding a secret that has the potential to destroy both of them. This complaint misses what's so powerful about the film's propulsive style. Every moment of the film is so immediate, so constantly now, that you simply accept what is happening as axiomatic. To ask why Julie loves Anthony makes as much sense as asking why it's raining now. It just is.

“The Souvenir” reminds me in a tangential way of Terrence Malick's shamefully underrated “To The Wonder” (2012) which also careened from highlight to lowlight to highlight in a tempestuous relationship. But where Malick was conducting a symphony, Hogg operates in a much less flashy idiom. Not prosaic, that's not right. I'm struggling for the proper description. More rooted? More improvisatory than carefully orchestrated? No, that makes it seem like she's not meticulously planning and in total control, which she certainly is. I dunno, give me more time to think about it. But Hogg speaks with a unique voice, and a style that is distinctive without ostentation.

Honor Swinton Byrne is great, turning in the best performance I've seen so far this year, though I admit I haven't seen many new releases so far. She plays meek and naïve and self-doubting without ever coming off as weak or straining viewer sympathy in the process. She's the daughter of Tilda Swinton, who also plays her mother in the film, so I suppose it shouldn't be a shock that she's so accomplished in her first lead role, also just her second official film credit according to IMDB. But she sure is fantastic.
Posted by Christopher Long at 12:01 PM

Email ThisBlogThis!Share to TwitterShare to FacebookShare to Pinterest
Labels: Hogg.Joanna