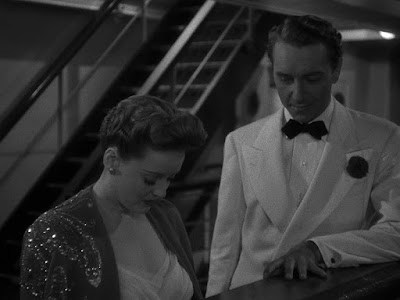 
In “Now, Voyager” (1942), Bette Davis portrays Charlotte Vale, one of THE Vales of Boston. Membership in the moneyed Vale family grants considerable privilege, but doesn't guarantee happiness or a life without obstacles. Charlotte is well aware of this, and summarizes the challenges facing her in six simple words: “My mother! My mother! My mother!”

Oh what a mother! The marvelous British actress Gladys Cooper spits fire and passes judgment on all as the domineering matriarch who reigns supreme at the Vale mansion. In the film's opening, Mrs. Vale has reluctantly called psychiatrist Dr. Jaquith (Claude Rains) to the secluded family home to discuss her troublesome daughter Charlotte. Who is Charlotte? Well, Mrs. Vale explains in stark terms that Charlotte was the unwanted and unexpected child of her “old age.” Charlotte is “My ugly duckling. Of course it's true that all late children are marked.”

Bette Davis an ugly duckling? You can't be serious. But mother has indeed marked her, which sets the stage for one of Davis's most unlikely and memorable screen introductions. Charlotte clomps down the stairs and enters the screen as a unibrowed, bespectacled frump stuffed awkwardly into a lumpy dress. Shy and frightened, she can barely meet Dr. Jaquith's gaze as he quickly diagnoses his new patient (the problem: “Her mother! Her mother! Her mother!”) and prescribes a few weeks of rest and recuperation at his facility.

This might sound like an ominous setup, but the film's presentation of mental health treatment is surprisingly positive if now antiquated. Mother may be ashamed (“No member of the Vale family has ever had a nervous breakdown”) but Dr. Jaquith soundly rejects the notion that any stigma should be attached. The doctor is a genuine do-gooder whose primary goal is to bolster Charlotte's self-confidence and free her from the smothering clutches of the Monstrous Mother.

Soon, a slimmed-down Charlotte (sans glasses) emerges from her stateroom aboard a cruise ship in a more flattering outfit, and swiftly draws the attention of a suave architect with the unlikely name of Jerry, unlikely because he's played by Austrian-born (and accented) Paul Henreid, recently relocated to Hollywood. Jerry is so silky smooth he can identify an old family picture of Charlotte as “that fat lady with the heavy brows and all the hair” and not miss a step in his dance of seduction. Unfortunately, Jerry happens to be married and even if it's a miserable marriage that means that, in the Hays Code era, Charlotte and Jerry can never truly be together. Except for that one night in Rio...

This ill fate only makes their romance all the more potent, one that still sizzles more than 75 years later. Director Irving Rapper, a relative newcomer hand-picked by Davis, and screenwriter Casey Robinson (adapting a recent novel by Olive Higgins Prouty) depict sublimated desire through several ingenious gambits, most memorably the repeated lighting of two cigarettes from one flame. Hubba-hubba! Their relationship can ultimately be realized only through an unlikely channel, Jerry's young daughter Tina (Janis Wilson), an “ugly duckling” unloved by her mother who Charlotte unofficially adopts. Yeah, it gets weird.

Some viewers may have a stereotype of Davis as the flinty broad who takes no crap from anyone, but she renders Charlotte as simultaneously vulnerable and strong. The real Charlotte is neither the complacent servant repressed by mother or the glamour-puss aboard the cruise ship, and Davis convincingly navigates a path between both extremes while discovering Charlotte's true character.

This recalibration requires the careful management of mother who is predictably unhappy to find her obedient wallflower has grown into a woman with her own plans. An unwanted child had best do what mother wants! Fortunately, the liberated Charlotte is strong enough to stand her ground and guide mother to a surly resignation to the new status quo.

Bette Davis was at the height of her stardom as one of Warner Brothers top stars (she was sometimes called the fourth Warner Brother) and “Now, Voyager” would become her top box-office draw of the 1940s. Pitched as a women's picture to female viewers, its appeal has proven to be both universal and enduring. It kicked off a pretty good year for both Henreid and Raines as well, as they would leave the set to start shooting on a flick called “Casablanca.” 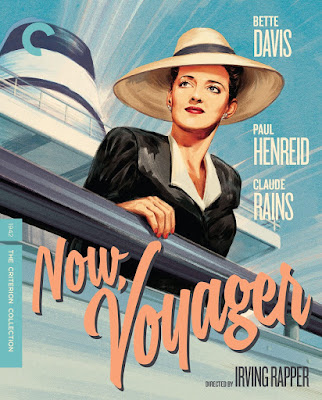 Video:
The film is presented in its original 1.37:1 aspect ratio. Criterion doesn't offer much detail beyond describing this as a “new digital transfer... in 4K” created from the original 35 mm nitrate original camera negative with some scenes scanned from a 35 mm fine-grain master at the Museum of Modern Art. The result looks fabulous with strong black-and-white contrast and sharp image detail throughout. The transfer retains a thick grain structure and surely looks better than any version most viewers have seen.

Audio:
The LPCM mono track is clear and sharp with no obvious distortions or dropoffs. It does a fine job of showcasing the Oscar-winning score by composer Max Steiner. Optional English SDH subtitles support the English dialogue.

Extras:
It's Bette Davis week at Criterion, and if they haven't loaded this disc quite as heavily as they stacked their “All About Eve” set, they certainly haven't cheated fans.

The film is accompanied by a selected-scene commentary by scholar Jeff Smith who discusses Max Steiner's score over about 27 minutes worth of scenes.

My favorite feature on the disc is an interview (31 min.) with Farran Smith Nehme, one of the best critics writing today. Nehme discusses the evolution of Davis's career from her early and often unhappy days with Universal to her hard-won commercial success at Warner Brothers. In career terms, Nehme views this film as Bette Davis “on top of Mt. Everest” and it's tough to dispute her claim.

The disc also includes a lengthy episode of “The Dick Cavett Show” (53 min.) which aired in November 1971 and features Davis in a typically lively interview.

We also get a very brief excerpt of a 1980 interview (4 min.) with actor Paul Henreid at his Los Angeles home, and an interview with costume designer Larry McQueen (11 min.) who talks about the close relationship between Davis and costumer designer Orry-Kelly.

The 32-page insert booklet includes an essay by film professor Patricia White and a reprint of an essay written by Bette Davis which originally appeared in the 1937 book “We Make The Movies.” Davis discusses the craft of the Hollywood actress, assuring readers they're just common working folk like everyone else.

Final Thoughts:
I had a blast watching both of Criterion's Bette Davis releases this week. I'm starting to think I might actually like “Now, Voyager” a little better than “All About Eve.” Of course, there's no need to choose. The transfer looks great and the disc includes plenty of extras. Fans should be delighted.

Posted by Christopher Long at 7:28 PM