I have some more thoughts about my favorite films of the 2010s. You can read the previous installment in this much-loved, widely-discussed series here. 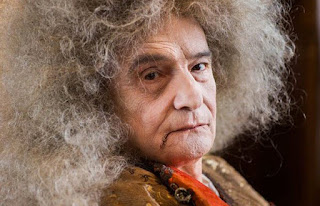 I'm not claiming that Jean-Pierre Leaud was the only actor who could have embodied director Albert Serra's vision of Louis XIV, but casting little Antoine Doinel as the setting Sun King was a stroke of inspiration guaranteed to touch the soul of any faithful cinephile. Just compare fresh-faced teenage Leaud in freeze frame circa 1959 (“The 400 Blows”) to this craggy, withered, royal wreck and marvel at the power of cinema (or at least photography) to span a lifetime in just two images.

Great, gangrenous Louis waits (in full regal luxury, of course) for the inevitable end that sure takes its sweet time arriving, while his faithful advisers fuss nervously in hushed, helpless meetings. Neither they nor Louis have any choice in the matter as the French Apollo has spent most of the seven decades of his reign accruing virtually unprecedented power by forcing everyone to relocate to Versailles and attend to the court's every need in elaborately proscribed daily rituals. Behold the era-hopping power of cinema once again by jumping back half a century to Roberto Rossellini's extraordinary “The Taking Of Power By Louis XIV”(1966) for the beginning of the story whose denouement Serra chronicles with panache here.

The array of charlatans who scrutinize Louis' various body parts with magnifying glasses and propose ineffective cures provide some quietly hilarious scenes – bull semen cocktails for all! Serra's gem may vault Louis into the lead as the most cinematic European monarch ahead of Elizabeth I and Henry VIII, or maybe it would if anybody still watched arthouse cinema. Leaud is riveting while remaining largely motionless and bedridden throughout, just sinking deeper minute by minute into the grave.

I think the film still works as a study in mortality (everyone finishes the race in a tie) for audiences unfamiliar with either “The 400 Blows” or Rossellini's “Louis XIV” but for viewers with a greater familiarity with film history, it carries a special resonance. 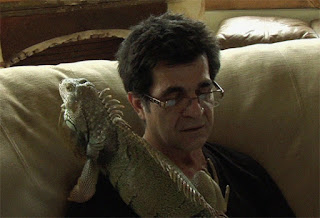 When I think of the definitive film locations, the screen spaces established and explored most vividly, the first two that spring to mind are The Overlook Hotel from “The Shining” and, of course, Jeanne Dielman's apartment at 23 Quai duCommerce, 1080 Bruxelles. Especially her kitchen.

Jafar Panahi's Tehran apartment from “This Is Not A Film” merits serious consideration as well. After all, at the time of shooting, the apartment is virtually the entire world for the filmmaker who has been placed under house arrest by the Iranian regime for supposedly creating “propaganda against the Islamic Republic.” Perhaps ex-filmmaker is the more proper term since, in addition to a potential six-year prison sentence, Panahi also faces a twenty-year ban on directing and screenwriting. So he stays at home all day with his pet iguana Igi and doesn't make films.

Certainly not “This Is Not A Film” which is really shot by his colleague Mojtaba Mirtahmasb and not at all by Jafar Panahi, which is proven when we see Panahi reflexively yell “Cut!” only to be ignored by Mirtahmasb who keeps rolling. Because, of course, Mr. Panahi isn't allowed to direct a film or write a script, and he wouldn't want to flout the law. He can, however, read from the screenplay he wrote before the ban or mark out the spots where his actors might have stood had he ever shot that project. If Mr. Mirtahmasb wants to film Panahi while he's doing such things and not at all making a film, that's entirely Mr. Mirtahmasb's business.

“This Is Not A Film” was allegedly smuggled out of Iran on a thumb drive hidden inside a birthday cake after which it wa screened to rave reviews at Cannes and other festivals. This (not a) film is a clever, bracing portrait of a courageous, resourceful, and resolute artist who intends to resist to the best of his abilities, and perhaps to entertain and amuse viewers in the process. Panahi had already established himself as one of the greatest directors of the previous two decades with masterpieces such as “The Mirror” (1997), “Crimson Gold” (2003), and “Offside” (2008). Even a legal ban by a repressive regime couldn't restrain such a talent from continuing to shine through the 2010s. Panahi's “Taxi Tehran” (2015) was damn near every bit as brilliant as “This Is Not A Film.”

Posted by Christopher Long at 11:01 AM