The Oscars had a chance to make history in 2020. Odds makers slightly favored Sam Mendes' “1917,” a two-hour video game cut scene featuring wooden acting and a histrionic plot that makes “Raiders of the Lost Ark” look like a Wiseman documentary. Following on the heels of “The Shape of Water” and “Green Book,” a Best Picture nod to Mendes' mendacious misfire would have secured the Academy three years of historic shame worth bragging about for life. Instead, voters eschewed a legacy by handing the statuette to Korean director Bong Joon-ho's “Parasite” (2019), an actual good movie, and the first foreign-language film to win the big award. Which is history too.

Set in Seoul, the film opens in the cramped semi-basement apartment of the Kim family. A long, thin window peeks out at an alley where drunks stop to piss and extermination trucks belch out thick billows of chemicals, unaware or unconcerned that anyone might be living nearby. Ki-taek (Song Kang-ho), the family patriarch, welcomes the death cloud that envelops the entire family in their living room. After all, the apartment is infested with bugs, and the family can't afford pesticides on the salary they earn from folding pizza boxes. A job at which, to be honest, they're not even that good.

The son, Ki-woo (Choi Woo-shik), soon seizes a better job opportunity, serving as an English tutor to the teenage daughter (Jung Ziso) of the wealthy Park family. Their gated house (built by a famous architect you've surely heard of) provides a stark contrast to the Kim estate. As Mrs. Park (Cho Yeo-jeong) introduces Ki-woo to his new workplace, the camera follows as they pass through glistening white rooms and walk down immense corridors that sprawl to both ends of the widescreen frame. The mansion's many windows offer a slightly more scenic view than a piss-soaked back street, mostly acres upon acres of sculpted green space, just sitting empty until the family decides to host its next party.

Ki-woo might have forged his credentials to get his tutoring gig, but initially he seems like an ambitious go-getter just trying to climb the ladder and haul his family out of poverty. By his own bootstraps, of course, just like all successful people. But the Kims (and, presumably, Bong Joon-ho, who also co-wrote the script) are too savvy to believe in the myth of easy social mobility, at least by legally sanctioned means. They realize that this situation calls for a full-blown caper, a con job, an outright heist. Ferreting out the needs and vulnerabilities of the upper-crust family, Ki-woo finds reasons to introduce his entire family, under various aliases, into the employ of the Parks, including his father, his sister (Park So-dam) and mother (Chang Hyae-jin).

The distinct contrast in living spaces potentially sets up a didactic clash of Kims vs. Parks as one of good vs. evil, privileged vs. exploited, but the film offers a much more nuanced social critique. To achieve their goals in a hardscrabble world where every winner requires a loser, the Kims engage in intra-class warfare, sabotaging the Parks' long-time servants, including a housekeeper (Lee Jung-eun) with both plans and working-class problems of her own. And the Kims' goal isn't so much to supplant the Parks, as primarily to install themselves as servants to the rich. Even the enterprising Kims at their most audacious can only dream so grandly; they know their place in modern society.

The Parks themselves are not malicious, but mostly oblivious, though that may be even a greater sin in a nation defined by economic inequity. While the Kims (and the housekeeper and the chauffeur and virtually everyone else) struggle for everything, the Parks remain blind to the fact that anyone has to struggle at all. This makes them perfect marks for the Kims' improvised schemes, and also leaves the Parks, along with audiences, completely shocked by the eruption of violence in the third act. Why would anyone be mad at us?

The film shifts deftly from wry humor and the general warmth of the Kim family with each other to the ruthless competition for the scraps left behind by the rich and a Grand Guignol climax. The cast is uniformly convincing, with longtime Bong collaborator Song Kang-ho shining as a defeated but not despondent man with a cheerfully bleak view of a society which offers little hope for those born without connections. In his view, it's best not to have a plan at all, because then nothing can go wrong and “nothing fucking matters.”

It's easy to understand why the Academy voters were as excited as the Cannes jury members who awarded “Parasite” the Palme d'Or in 2019. Still, just imagine: “The Shape of Water,” “Green Book” and “1917” all in a row. The Academy could have ended the decade in utter disgrace, the same as America. It would have been glorious. 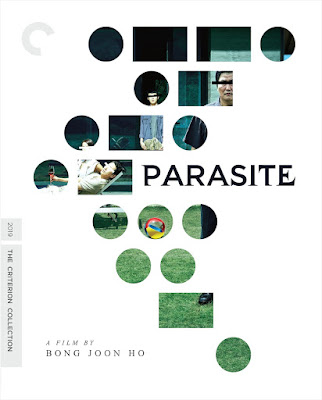 The film is presented in its original 2.39:1 aspect ratio. This 1080p transfer looks nothing short of immaculate, so much so that I can think of nothing to say save that it surely looks as good as it did in theaters.

Criterion has provided a Dolby Atmos sound mix (7.1), and I won't claim that I know enough about audio formats to determine how different this sounds from the more typical Criterion stereo mix in DTS-HD Master Audio. I also don't own a system strong enough to showcase a more robust mix like this. I'll trust other reviewers who are wowed by the depth of this surround design. Optional English subtitles support the Korean audio.

Criterion has stacked the extras on this two-disc Blu-ray release.

The most notable feature is a black-and-white cut of “Parasite,” included on the second disc. This cut is identical in every way to the theatrical release of the film, except that it is rendered in black-and-white. When asked why he wanted to offer a B&W version even though the film was always intended to be shot in color, Bong states simply that it was “an itch I had to scratch,” and a nod to many of the classic films that fueled his cinephilia. It looks just as sharp in high-def as the color version on Disc One does.

Other supplemental features are spread out across both discs.

On Disc One, the film is accompanied by a new commentary track by Bong and film critic Tony Rayns.

The rest of the features on Disc One consist of interviews with crew members: Bong Joon-ho (36 min.) in conversation with critic/translator Darcy Paquet, cinematographer Hong Kyung-pyo (21 min.), production designer Lee Ha-jun (22 min.), and editor Yang Jin-mo (15 min.) The interviews touch on a range of technical subjects, but the picture that emerges of Bong is of a director who plans everything ahead of time and usually shoots very closely to his storyboards. The disc also includes two Theatrical Trailers (4 min. total).

In addition to the B&W cut of the film, Disc Two includes a conversation between Bong and director Park Chan-wook (“Oldboy”, etc.) They talk about the emergence of New Korean Cinema, the film movement they played a major role in. They discuss the gradual thawing of South Korean censorship beginning around the early-1990s, which made many more films available to eager young movie lovers like themselves. VHS and DVD also allowed these budding filmmakers to watch scenes over and over to study them for their own work.

We also get a press conference (28 min.) from the 2019 Cannes Film Festival, where “Parasite” won the Palme d'Or. This is a panel discussion with Bong and his cast members.

Criterion has also included a “Lumiere Master Class” (82 min.) in which Bong is on stage in an event hosted by French director Bertrand Tavernier, who is a very, very big fan of Bong. For any audience members who have been shamed for asking silly questions at post-screening events, please note that the legendary Tavernier begins by, basically, asking Bong where he gets his ideas from.

Disc Two closes out with a Trailer (1 min.) and a “Storyboard Comparison” (6 min.) which, as you can probably guess, provides split-screen comparisons of the original storyboards to the final scenes from the movie.

Did “Parasite” really win the Oscar this year? This decade-long year? That's not possible.

With a black-and-white version of the film plus a ton of extras, “Parasite” fans can't ask for much more than Criterion has provided with this two-disc set.

Posted by Christopher Long at 8:20 AM