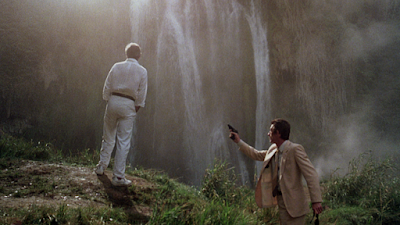 Willie Parker (Terence Stamp) is a two-bit hood who sings like a canary to save his own skin. During his testimony, the “supergrass” (British slang for a snitch) mugs for his courtroom audience, relishing the brief moment when he actually matters. He has no idea just how much he matters until the former compatriots he's just sold out sing him off the stand with a menacing chorus of “We'll Meet Again,” an absurdist touch rendered no less absurd for the fact that it really happened to Bertie Smalls, the crook turned stool pigeon whose story loosely inspired director Stephen Frears's “The Hit” (1984).

Fast forward ten years and Parker is living the good life in rural Spain, still under witness protection. Parker's had time (he has nothing but time) to read and to think. The thief has turned philosopher, adopting a dispassionate outlook on life: “We're here. Then we're not here. We're somewhere else. Maybe.” His detachment serves him well when the day he knew was coming finally arrives (“Don't know where, don't know when”) and a group of thugs kidnap him from his home. He resists at first in an eccentrically staged fight that feels like a but of an homage to Nicolas Roeg, but once trapped on the roof he shrugs and resigns himself to his fate.

Parker is handed over to a pair of thugs, the world-weary Braddock (John Hurt) and rookie smartass Myron (an impossibly young Tim Roth in his first film role), whose assignment is to bring Parker back to Paris where his old boss will execute him. Myron snarls and preens, straining to look as cool and tough as possible, while the veteran Braddock plays it close to the vest, his tightly-drawn features revealing little, making his sudden violent eruptions even more frightening.

Braddock is a consummate professional, focused solely on the job at hand, but he becomes increasingly agitated by Parker's impenetrable serenity. This man knows he's going to die in a few days, so why the hell does he seem to be so happy about it? The implacable killer has survived many tight spots and outmuscled plenty of tough guys, but he may not be able to triumph against the most remorseless foe of all – philosophy. A hired gun can't maintain his sociopathic edge while contemplating the meaning of life.

Stephen Frears directed a feature in 1971, but honed his craft in television before returning to the big screen with “The Hit,” working from a smart script by Peter Prince. Frears displays an easy command of scale and location, contrasting numerous tense scenes in cramped cars with the wide-open beauty of the Spanish countryside. Ramshackle gas stations are filmed with the same beauty and dynamism as majestic windmills and waterfalls. The film also cuts away frequently from tight-quarters action to distant overhead analytical shots (tiny cars kicking up dust on lonely back roads) that chill the action and refresh the perspective. Prince's script, meanwhile, imbues each character with an independent vitality, including young Maggie (Laura del Sol), a gangster's fiery girlfriend who they pick up along the way. Everyone may be traveling in the same direction, but they're each on their own journey.

All of the film's knotty threads and character arcs converge in one memorable moment. When Parker's true devotion to his bespoke Zen doctrine is revealed, the irreverent punk Myron laughs derisively. It's a brilliant bit of acting, and an efficient expression of all the film's roiling tensions, all its turbulent crosscurrents swirling together in a short, sharp snort that says, “Are you fucking kidding me? Did we really come all the way just for this bullshit?”

Road movies frequently end up in the heart of nowhere. Few chart the journey it with the bleak panache of “The Hit.” 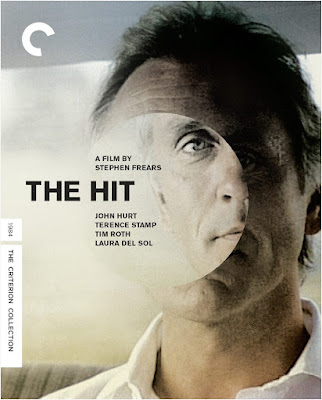 The film is presented in a 1.78:1 aspect ratio. This appears to be a 1080p upgrade of the previous transfer used by Criterion when they originally released “The Hit” on DVD in 2009. The color palette is rich and naturalistic and image resolution is sharp throughout, as is customary with Criterion high-def transfers.

The linear PCM mono sound mix isn't too dynamic, but is sharp. The raging title song by Eric Clapton and the score by Paco de Lucia are both presented strongly here. Optional English subtitles support the English audio.

Criterion's 2009 DVD release was fairly sparse on extras, and nothing has been added for this 2020 Blu-ray upgrade.

Aside from a Trailer (3 min.), the only other extra is an episode of the British talk show “Parkinson One-to-One” (1988, 37 min.) The entire show is devoted to an interview with actor Terence Stamp. Stamp only briefly mentions “The Hit” but discusses his career ranging from his start as a cool '60s icon to his relative disappearance in the '70s and his return to Hollywood in “Superman.” This includes a fun anecdote about Marlon Brando.

“The Hit” was not a hit with audiences. Frears would have to wait a year for his break-out with “My Beautiful Laundrette” (1985). It is, however, a splendid gangster film that rejects any romanticizing of its lowlife protagonists. The Criterion disc is short on extras, but provides a quality high-def transfer of a very fine film.
Posted by Christopher Long at 3:33 PM