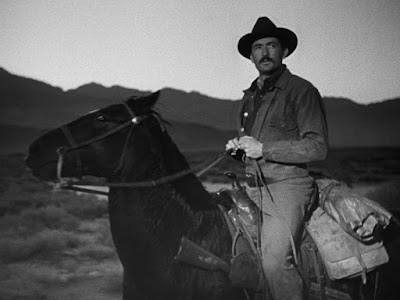 Nobody ever tried so hard to get shot as Eddie.

Poor, dumb Eddie (Richard Jaeckel). Just a kid raised on the thrills of the dime-novel insta-fables of the American West, and bored with the dusty, manure-drenched reality of actually living in the American West. When the legendary gunfighter Jimmy Ringo (Gregory Peck) saunters into the local saloon, a toothy smile cracks Eddie's face. That's the fastest gun in the West? The man who's tougher than Wyatt Earp? The killer who's gunned down fifty men just for looking at him the wrong way?

“He don't look so tough to me,” says Eddie before confidently striding up to the bar.

Rest in peace, Eddie. Nobody will remember you.

Jimmy Ringo really didn't have a choice. Honest. He gave Eddie every chance to walk away with his life and even his dignity intact, but the kid wanted to make a name for himself. And he drew first! You all saw it. Sure, but Eddie's brothers don't care who drew first, so Ringo rides off to the town of Cayenne where he is greeted with the familiar refrain: “He don't look so tough to me.” There's always another Eddie.

Director Henry King and star Gregory Peck had just bombed the hell out of the Nazis in “Twelve O'Clock High” (1949), and reteamed in “The Gunfighter” (1950) to tear down the myth of the fearless outlaw. Just 35-years-old, a weary Jimmy Ringo already buckles under the burden of a lifetime of bad decisions. He could have chosen love, but he wanted to be the best and most-feared gunfighter of them all, and so he is. Which means that every Eddie who wants to be the best gunfighter of them all needs to go right through him. Preferably with all six shots. (See also: The “Twilight Zone” episode “A Game of Pool” for a variation on the same story.)

Ringo is all but resigned to his fate, but he clings to one tendril of hope in the form of his old flame, Peggy (Helen Westcott), and their son, who doesn't even know who his father is. That's the real reason Ringo fled to Cayenne, but to get to Peggy he first has to get past town marshal Mark Strett (Millard Mitchell).

Up until this point, Peck has portrayed Ringo as grim and slouching, a lost soul with no joy, but when he sees the marshal he breaks out his movie-star smile. Mark and Ringo used to ride together, and Ringo know this is the one man he can trust in this fallen world. But the marshal also serves as a reminder of Ringo's misguided life choices. The reformed Mark has a purpose now, a community that relies on him. Mark is so at ease with his life and his home he doesn't even need to wear his guns. Ringo is a living legend, Mark is a grown man. Millard Mitchell, a reliable character actor, delivers a charming, confident performance that, at times, eclipses even Peck's leading man charisma.

The film's gunfights are few and barely glimpsed, over the instant they start, just a ringing shot and a puff of smoke left behind. King and his creative team, including cinematographer Arthur C. Miller and the redoubtable editor Barbara McLean (who receives a lot of attention on this disc's extra features), are more interested in creating a concrete sense of place that grounds the legend in reality. Mark repeatedly strides the length of the main road in Cayenne while Ringo remains trapped in the saloon, just waiting, constantly checking the clock. Boys crowd in to get a glimpse of the great outlaw, and the local Church ladies demand justice, a quick hanging perhaps. The bartender (a then still mostly unknown Karl Malden) looks forward to his saloon becoming a big tourist attraction thanks to Ringo. Peggy sees Ringo's inevitable fate even more clearly than he does.

And, of course, the next Eddie lines up for his chance to take down Jimmy Ringo. After all, he don't look so tough. 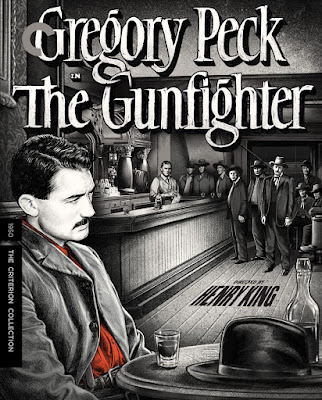 The film is presented in its original 1.33:1 aspect ratio. From the Criterion booklet: “This 4k digital restoration was supervised by the Twentieth Century Fox Restoration Department in 2015. A new digital transfer was created from a 35 mm duplicate negative and restored at Cineric in New York.” This 1080p transfer presents the black-and-white photography in sharp detail with a thick grain that lends it an authentic filmic look. Detail is sharp in motion as well as in static close-ups.

The linear PCM mono audio mix is crisp with no evidence of distortion or drop offs. The film only features music (by composer Alfred Newman) at the beginning and end. Both sound effects and dialogue are treated well with this mix. Optional SDH English subtitles support the English audio.

Criterion has included a healthy selection of supplemental features on this Blu-ray.

The extras start with an interview (2020, 23 min.) with filmmaker, writer, and archivist Gina Telaroli who champions director Henry King, often overlooked because he wasn't as much of a stylist as more celebrated auteurs. She discusses his early career as a silent film actor and his transition to directing, emphasizing his interest in story and location.

Telaroli also discusses the contributions of editor Barbara McLean, but film historian and author J.E. Smyth takes a much closer look at McLean's career (2020, 23 min.) McLean received seven Oscar nominations and was the favored editor of both producer Darryl F. Zanuck and director Henry King. McLean was so powerful at Twentieth Century Fox she could not only order re-shoots, but even direct them when needed. This is a marvelous supplement and I would love to watch a full-length documentary about McLean. The second half of this feature analyzes the editing choices in a few scenes from “The Gunfighter.”

The disc also includes two audio features. Both compile audio excerpts from interviews conducted by Thomas R. Stempel as part of the AFI Oral History Collection. From a 1970 interview (33 min.) we get to hear from Barbara McLean about her career, while a 1971 interview (36 min.) hands the microphone to director Henry King.

Revisionist Westerns began well before the 1960s. No single film is the first, but “The Gunfighter” is a vivid early example of a deceptively simple story that interrogates and undermines many of the conventions of the genre. With a sharp transfer and a solid collection of extras, this release makes a fine addition to the Western corner of the Criterion Collection.
Posted by Christopher Long at 8:14 PM