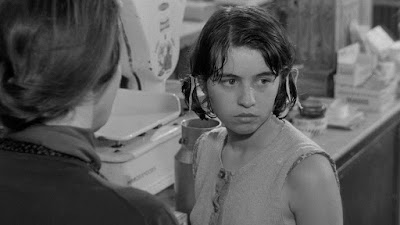 Mouchette (Nadine Nortier) is a teenage French peasant girl saddled with a dying mother and an abusive, alcoholic father. With her raggedy hand-me-down clothes and clogs two sizes too big, she finds no friends in school either, nor does she invite them, preferring to lob mudballs at her classmates during recess. Whether her aggression speaks of desperation or sheer spite, the saddest part is that the other girls don’t even care enough to retaliate. Mouchette simply means nothing to them. She doesn't matter to anyone at all.

If you're expecting this grim setup to turn into a triumphant redemption, you're obviously unfamiliar with writer/director Robert Bresson or with author Georges Bernanos whose 1937 novel “Mouchette” (1967) is adapted from. Bresson had previously tapped Bernanos as the source for “Diary of Country Priest” (1951), the first film in which the director transformed fully into the nonpareil Bresson celebrated by devotees today. “Mouchette” is somehow far bleaker than the first Bresson-Bernanos joint. Indeed, it's one of the most desolate films ever made, on a par with Kenji Mizoguchi's “Sansho the Bailiff”(1954), Kon Ichikawa's “Fires on the Plain” (1959), or perhaps Bresson's career-capping “L'argent” (1982).

Mouchette slouches through listless days at school and equally listless nights at home, where she is expected to handle all the household chores and care for the baby, while her no-account father and brother smuggle alcohol, mostly for their own consumption. At least these quotidian rituals provide some minor respite from a meaningless life, but Mouchette aches for an escape from the tedium.

She finds some relief in her daily walks through the forest, taking the long way home (for understandable reasons) but this “green place” offers her only the modest gift of solitude, not redemption. On one such walk, Mouchette is waylaid by a sudden rainstorm (she calls it a cyclone, but nobody believes her) which brings her face to face with Arsène (Jean-Claude Guilbert), a local poacher. Arsène believes he has just killed a man in a drunken argument (the disease of alcoholism stalks the countryside like the Black Death of half a millennium ago.) Arsène enlists Mouchette’s aid in providing him an alibi. She readily agrees, but their conversation turns ugly, and Arsène rapes her. In the morning, Mouchette slinks back home just in time to see her mother die.

Total abjection provides a form of liberation for Mouchette. She has been pushed beyond caring about any social niceties, about anyone’s rules. When the falsely pious townsfolk extend sympathy for her mother’s death, she figuratively spits in her faces, and literally treads mud all over their nice, pretty rugs. But poor Mouchette’s awakening still finds her with the same limited options she had before. She’s a rebel with nothing to rebel against, simply because nobody cares and all the rules are stacked against her. She cannot win, she can only leave the world on her own terms. And so she does.

In Bresson's prior films, his characters achieved a state of grace in their suffering, but it’s hard to say the same of Mouchette. Her suicide is simply tragic, painful, desperate, with no redeeming aspect. If she intends a big “fuck you” to the town, it will go almost entirely unnoticed and be quickly forgotten. Even dear old dad will use her death as just another excuse to get piss-drunk. At best, it can be seen as Mouchette’s defiant act of autonomy, taking control of her body and her life in a way the rotted-besotted town patriarchy would never allow. Ice cold comfort.

As in most Bresson, off-screen noises play a prominent role in structuring the film. Trucks constantly rumble by, unseen except when their headlights play across the wall of Mouchette’s hovel. The modern world is encroaching on this insular rural town that's wobbling on its last drunken legs. Bresson also uses music sparingly, with Monteverdi’s “Magnificat” serving as the only non-diegetic music in the film.

As usual, Bresson employs a cast of mostly non-professional actors whom he considered more as “models” than performers. Nortier is a typical Bressonian model, coached to act with as little inflection as possible. She moves slowly, walks slump-shouldered, and her face rarely registers much emotion, with the notable exception of the bumper-car ride when Mouchette briefly smiles and laughs like a “normal” girl. Some viewers have difficulty adapting to Bresson’s idiosyncratic approach to film acting, but for fans of the director he sometimes seems to be the only one who ever got it right. That’s an exaggeration, of course, but Bresson’s singular, obstinate body of work can really be compared to no other.

By holding back so much that we typically expect to see in a film (emotive acting, for example), Bresson ultimately unleashes a powerful force that is difficult to describe. Call it transcendental, call it sublime, call it ineffable. Whatever label you choose, it has an impact like nothing else cinema has ever produced. 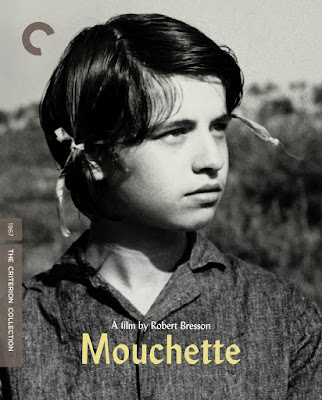 The film is presented in its original 1.66:1 aspect ratio. According to Criterion, this new 1080p transfer is sourced from “a full 4K restoration.”“Mouchette” was Bresson’s last black-and-white film, and this high-def upgrade improves upon the original 2007 DVD release from Criterion, doing justice to Ghislain Cloquet’s starkly beautiful photography. Black-and-whit contrast is sharp, with most scenes looking rather dark, as intended.

The linear PCM mono track is sharp with no signs of distortion. Bresson's sound design is spare with limited music and only select sound effects. Optional English subtitles support the French audio.

All extras are imported from Criterion's 2007 DVD release with no new extras included.

“Mouchette” doesn't arrive with as many extras as some other Criterion releases of Bresson's work. However, the 2007 commentary track by Tony Rayns is superb, as we would expect from Mr. Rayns.

The main extra feature is “Au hasard Bresson” (1967, 30 min.), a documentary directed by German film critic Theodor Kotulla. Kotulla visited the set of “Mouchette” to speak with Bresson, and wound up with this little gem that delves much deeper than the usual “behind-the-scenes” documentary.

“Traveling” is an excerpt (7 min.) from a French television show which features interviews with some of the cast members of “Mouchette.” Nothing special here.

Perhaps the most intriguing extra for die-hard cinephiles is an original theatrical trailer for “Mouchette” cut by Jean-Luc Godard. Godard denied making this trailer, but it’s hard to believe anyone could mistake it for anything but a Godard work.

The slim fold-out booklet reprints the 2007 essay by critic and poet Robert Polito.

“Mouchette” is grim, demanding viewing which requires patience even at its brisk 81 minute running length. If you have never seen a Bresson film before, don’t start here. “Mouchette” is hermetic, and utterly despairing, even by Bresson’s standards. Try “A Man Escaped” (1956), “Pickpocket” (1959), or “Au hasard Balthazar” (1966) first before you tackle this one. I don’t wish to convey the notion that Bresson is somehow esoteric or inaccessible; I don’t believe that at all. His films are concise and concrete, but their surface simplicity hides the degree to which each image and sound is so densely packed, and only proper context (training, if you will) can help viewers unpack them.
Posted by Christopher Long at 8:00 AM