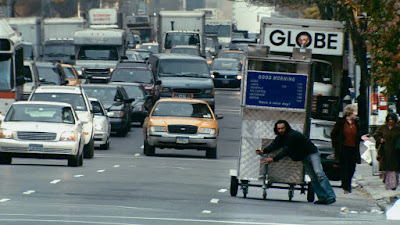 In a dimly-lit warehouse, silhouetted men lift boxes, pry open metal doors, and haul heavy equipment, all to prepare for another day of work on the streets. In his feature debut, director Ramin Bahrani immediately immerses viewers in the milieu of New York City food cart vendors, and the daily routine of protagonist Ahmad (Ahmad Razvi) as he attaches a propane tank to the back of his cart; he'll lug that tank with him everywhere he goes, unable to risk abandoning the only frayed lifeline still tethering him to the elusive American Dream.

Ahmad drags his bulky cart behind him, huffing and sweating his way to his assigned corner so he can sell doughnuts and coffee (in cups reading “We Are Happy To Serve You”) to yuppie office workers. In one harrowing sequence, he loses control of the cart and nearly tumbles into the path of merciless NYC traffic. The accident really happened and Razvi, an amateur actor who actually ran a food cart for a year, picked himself back up and heaved the cart as far as he could, hoping that the camera picked up the shot.

“Man Push Cart” (2005) largely defines Ahmad by his work at first, and we only gradually learn a few selected facts about him. A fairly recent immigrant from Pakistan, he is estranged from his young son, and his wife is dead for reasons unspecified though her parents blame Ahmad for it. At one point, Mohammad (Charles Daniel Sandoval), a Pakistani-American businessman, recognizes him as a successful pop singer from back home - the “Bono of Lahore” as Mohammad puts it.

Mohammad tries to give “Bono” a career boost, but Ahmad struggles to complete most tasks, whether they involve repainting windows, working a shift at a concert, or taking care of a kitten he finds in the street. Ahmad even watches passively as Mohammad vies for the affections of Noemi (Leticia Dolera), a Spanish food cart vendor with whom Ahmed has forged a modest connection.

Slump-shouldered, eyes downcast, voice hesitant, Ahmad may be suffering from depression, but it's fair to speculate if he might simply be exhausted. Bahrani and cinematographer Michael Simmonds, filming primarily with a handheld HD camcorder, stalk alongside Ahmad as he laboriously tows that cart along the same streets every day to the same corner to sell the same fifty-cent bagels - an extra ten cents for butter, fifty for cream cheese - all for the privilege of repeating the process the next day (yes, Bahrani cites Camus' “The Myth of Sisyphus” as an inspiration.) The camera clings closer still as Ahmad uses his totemic propane tank as a stepladder to hop a wall so he can eavesdrop on his in-laws, just to feel close to his son.

Every day demands hard labor made harder still in the aftermath of 9/11 and the shadow of the fallen Twin Towers. Ahmad and his fellow immigrants, the bulk of the NYC food cart workforce, live and work in a city where they can be targeted as “terrorists” at any moment, something that actually happened to Bahrani and his crew while shooting the film. If you wonder why Ahmad doesn't seize all his opportunities like the hungry dog he's expected to be, just imagine how tired he must be.

Bahrani researched this project for years, getting to know real food cart workers and learning about their work days. Working with a non-professional cast, a small budget, and an even smaller crew, Bahrani produced a true American independent film of the old-school DIY variety, one devoid of cloying indie quirk but heavy on respectful, empathetic observation. “Man Push Cart” captures a New York City seldom presented on film, a remarkable feat the director would pull of again with his second feature, “Chop Shop”(2007), also released on Blu-ray this week by Criterion. 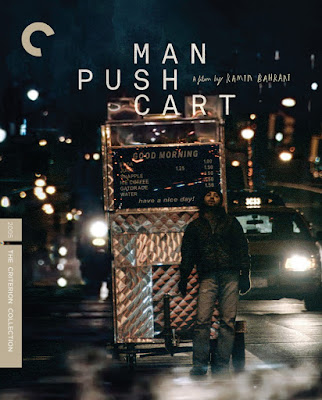 The film is presented in its original 1.78:1 aspect ratio. The movie was shot on an HD camcorder, and it looks a bit washed out and not always sharp in motion, even in this new 1080p transfer. Darker scenes don't reveal a lot of detail at times. However, it all works well for the authentic feel of a low-budget film shot on the streets – a glossy, flawless look wouldn't be appropriate for the material. The handheld photography in this film is sensational at times, and this transfer does justice to the whole production.

Criterion is releasing two Bahrani films this week, “Chop Shop” being the other. They've included a similar array of supplements for each film.

Criterion has also included “Backgammon” (1998, 12 min.), a short film by Bahrani about an Iranian-American family and a little girl who just wants to play backgammon with her grandfather. Clearly inspired by the works of Abbas Kiarostami, it even includes a direct and very sweet reference to Kiarostami's “Where Is the Friend's House?”

“Formation of a Filmmaker” (2020, 19 min.) is a conversation between Bahrani and scholar Hamid Dabashi, a former professor of Bahrani's at Columbia. They discuss some of Bahrani's influences, including Persian literature. Bahrani also talks a bit about his early production methods, including rewriting his script to suit his actors and also how he shot “Man Push Cart” with virtually no coverage, leaving little wiggle room in the editing bay.

The disc also includes a “Making Of” piece (2020, 25 min.), a discussion among Bahrani, Razvi, and Nicholas Elliott. Bahrani talks about first meeting Razvi as a server in his family's sweetshop. They also talk about other incidents during production, including being contacted by the FBI after a racist apparently placed a call claiming they were engaged in suspicious activities.

We also get a Theatrical Trailer (2 min.)

Bahrani's first feature film played at Venice and Sundance, and helped provide the breakthrough for a career that has continued for nearly twenty years now, with his most recent release, “The White Tiger” (2020), debuting on Netflix. Criterion has provided a solid release for the debut film of one of the best American independent filmmakers of his generation.

Posted by Christopher Long at 1:05 PM