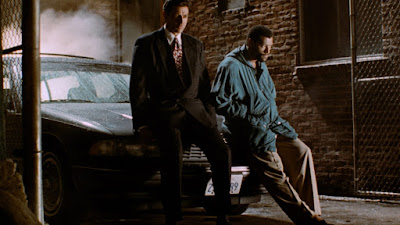 It's Cleveland, 1972, and a car cuts through the snow on a street festooned with Christmas lights as distant carolers sing “Silent Night.” The holiday cheer is undercut when the scene moves inside the car where a father snorts coke before asking his young son, “Whatchu want for Christmas?” The boy, Russell Stevens Jr., then watches helplessly as his father robs a liquor store and is shot to death, his blood spattering the car window. In voice-over, the adult Russell Jr. states bluntly that as he watched his father die in the snow, “I only had one thought; it wasn't gonna happen to me.”

Jump ahead twenty years and Russell (Laurence Fishburne in his first leading role) appears determined to keep his vow. Now a morally upright police officer, he reports for an interview with DEA Agent Gerald Carver (Charles Martin Smith) ready to do his duty. The smug Carver tries to ambush him with a racist challenge, but Russell's cool refusal to take the bait lands him Carver's respect and a dangerous assignment to go undercover as a drug dealer to infiltrate a Los Angeles cocaine ring.

So Russell sinks deeper into the muck where he encounters two-bit hoods, corrupt Latin American politicians, and, filthiest of all, David Jason (Jeff Goldblum), a crooked lawyer who dreams of becoming a drug kingpin, as long as it doesn't take too much work. “Deep Cover” features many sleazy characters and wild performances, but nobody embraces his own vileness with as much gusto as Goldblum. David can shift seamlessly from teaching his adorable daughter her multiplication tables to celebrating his first murder by leaning out of a moving car and shouting, “Then we'll have jumbo barbecued shrimp, you motherfucker!” When told by Russell that his sexual attraction to black women stems from his racism (“Maybe you feel like you're fucking a slave”), David just shrugs – that's fine by him. Your conscience can't be bothered when you don't have one.

The script by Michael Tolkin and Henry Bean was originally written for a white protagonist, but a studio executive hoping to cash in on the success of films like “Boyz n The Hood” (1991) proposed shifting to a black lead. In the process, director Bill Duke adapts many elements of classical Hollywood film noir, predominantly the domain of white characters, to the American War on Drugs, also depicted here as the American War on people of color, waged on violent city streets heavily populated by impoverished black and Latino citizens.

Young Russell may have sworn “it wasn't gonna happen to me” but many film noir protagonists are victims of a sinister fate beyond their control. In “Deep Cover” characters like Agent Carver (who is white) seem determined to ensure that “it” will indeed “happen” to Russell. That's what's supposed to happen to the black child of a junkie burglar, after all. Russell has his own plans, detailed in his frequent voice-over, perhaps the most traditionally noir-ish element in the film. “Deep Cover”, shot by cinematographer Bojan Bazelli, also transforms the inky black-and-white shadows of classical noir to the hot reds and sickly yellows of the City of Angels in the early '90s.

Race and/or class define most character interactions. Russell (posing as drug dealer “John Hull”) and David become business partners, but they'll never be friends for the simple reason that David is an entitled racist who always considers himself superior. Once, when Russell warns David, after one of his smarmy racist rants, to “watch your mouth” the lawyer snaps back like a spoiled child, “I can say anything I fucking want to say!” Which has, indeed, always been an assumed privilege in David's world, whereas the film shows Russell forced to constantly measure his words, not just to maintain his “deep cover” but to survive in American society.

The drug/crime plot is mostly standard issue, but even its more cliched or implausible touches are delivered with operatic flair by Duke and his cast, imbuing the film with a nervy brashness that powers it through its rougher patches. The late, great Gregory Sierra, playing a cocaine dealer, giddily channels the animal spirit of Al Pacino's Tony Montana when he disposes of an underling by the bloody and highly theatrical use of a pool cue. Another major confrontation takes place at a drug kingpin's headquarters, a movie theater where the bad guy is screening a Luis Bunuel film because, as we all know, that's just the kind of thing drug kingpins like to do with their free time. At least when they're directed by a graduate of the AFI Conservatory.

Fishburne shines in his first leading role, as a man repulsed by his corrupt world and everyone in it, including himself once he succumbs to the tempttions of the lifestyle of a high-rolling drug dealer. Goldblum wears the mantle of a shameless sleazebag so comfortably it's difficult not be won over by his undeniable charm even though Duke never lets us forget for a second that David is a loathsome, irredeemable pig. 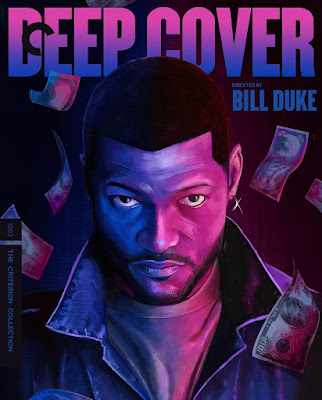 The film is presented in its original 1.85:1 aspect ratio. This new 1080p transfer “approved by director Bill Duke” showcases bright primary colors and strong detail even in the darkest nighttime scenes. It doesn't quite have the grainy look you might expect from a (neo)noir, but this high-def transfer is strong all around.

The film is presented with a DTS-HD Master Audio 2.0 sound track. Both sound effects and music, a mix of pop songs and original score by Michel Colombier, sound sharp with no evidence of distortion. Optional English SDH subtitles support the English audio.

Criterion's collection of supplements consist primarily of interviews with the filmmakers and with critics.

First, the disc includes an interview with Bill Duke (2021, 18 min.) in which the actor/director credits some of his major influences (Gilbert Moses, Mario van Peebles, etc.) then discusses his career both as an actor in films like “Car Wash”, “American Gigolo”, and “Predator” and as a trailblazing television director – he was the first black director on series such as “Dallas.”

Next we get video of a 2018 post-screening Q&A panel (56 min.) at the AFI Conservatory, featuring Duke and Fishburne and moderated by critic Elvis Mitchell.

In a wide-ranging discussion (35 min.), film scholars Racquel J. Gates and Michael B. Gillespie help to place the film in the context of the '90s boom in African-American cinema and provide details about the film's production.

Scholar Claudrena N. Harold and professor/DJ Oliver Wang talk (17 min.) about the title song “Deep Cover” (by Dr. Dre and introducing Snoop Doggy Dogg) and its significance in hip-hop at the time.

The slim foldout booklet features an essay by Michael B. Gillespie.

“Deep Cover” was part of the early '90s explosion of African-American cinema in mainstream Hollywood. It didn't receive as much attention as John Singleton's “Boyz n the Hood” or Mario van Peebles' “New Jack City” (1991), but it's a significant film in its own right, helping to launch Fishburne as a leading actor and and allowing director Bill Duke to rework film noir in a unique fashion. It's also a hell of a lot of fun. This Criterion release provides a strong high-def transfer and an array of features that argue convincingly for the importance of re-introducing this film to 21st century audiences.

Posted by Christopher Long at 7:29 PM