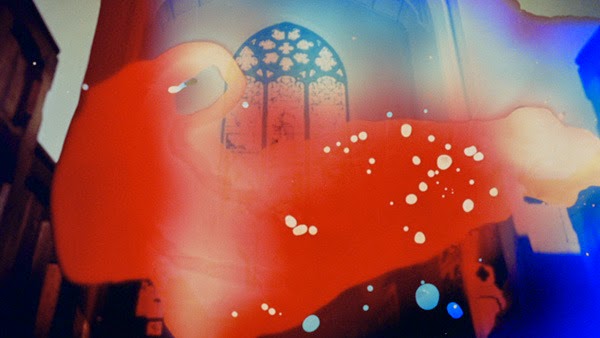 In his third feature film, adapted from a short story by Daphne du Maurier, director and former cinematographer Nicolas Roeg achieved the perfect realization of his dense, elliptical and entirely idiosyncratic visual style. In the stunning opening sequence, a young girl decked out in a red raincoat plays by a pond. The film cuts inside to the family house where her father John Baxter (Donald Sutherland, with one of the most magnificent heads of hair in the history of cinema) is busily studying slides of a cathedral; John already knows he needs to look closely. 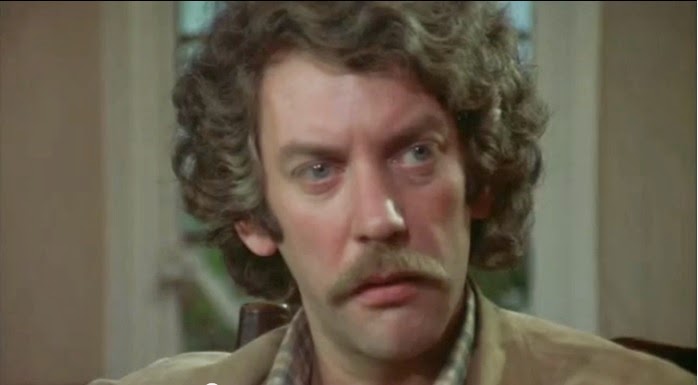 The scene cuts back and forth between the two parallel actions. As Christine approaches the pond, John spills water on the slide causing an unidentified patch of red John has just noticed in the image to blur and spread in an arc across the picture. He instantly senses danger, a foreboding to which his wife Laura (Julie Christie, one of the most magnificent women in the history of cinema) remains oblivious as she leafs through reference books on the living room floor. John races out back to find that Christine has drowned.

It's a complex sequence that needs to be viewed multiple times to fully unpack it. What was that blotch of red in the cathedral and why did it bleed out in that shape? As he cradles his baby girl and sobs incoherently, does John briefly flash a look of disdain back to the house when he glimpses the still unaware Laura through the window as if to wonder “How could she not know?” Perhaps it is just all-consuming grief. At any rate, Roeg saves perhaps the biggest surprise for the final cut in the sequence, a jolting leap to a close-up of a loudly-buzzing drill that has suddenly transported us to Venice at an indeterminate period in the future.

John has been hired to restore the magnificent but crumbling church of San Nicolo dei Mendicoli, perhaps because the local bishop is so impressed by John's hair which is clearly a gift from the Lord. Unfortunately, neither work nor the move from England to the city of canals enables the couple to escape their grief. Roeg and his creative team, including cinematographer Anthony Richmond and editor Graeme Clifford, convert Venice into a nearly abandoned labyrinth with a constantly shifting geography. John and Laura wander the nighttime streets alone and lost as once familiar alleyways no longer lead where they should; they also appear to be the only guests still staying at their hotel which is about to close for the season. The traditional Venice tourist landmarks are all but absent (St. Mark's is seen in the background once or twice); this is a space, maybe a testing chamber, carved out specifically for the Baxters, or perhaps made by the Baxters as an expression of their unspeakable loss.

Laura falls in with two eccentric elderly sisters, one of whom is blind and claims to be psychic. The woman says that she has seen Christine in a vision and that the child is happy but also has a warning to pass on to John: he must leave Venice immediately or else. Laura believes because the evidence that Christine still exists has assuaged her pain, but John remains highly skeptical. It's a reminder that, as in the opening scene, the husband and wife are on very different wavelengths, a fact that surprisingly makes them that much more convincing as a couple on different journeys but still sticking together. It also heats up the film's (in)famous sex scene, a collision of naked bodies repeatedly intercut with shots of the couple dressing afterward. The piece de resistance in this steamy sequence: a quiet shot of a fully-dressed Laura looking in the mirror and just barely licking her lips. Scorching hot. Roeg has an unerring eye for the perfect image. Christie helps. 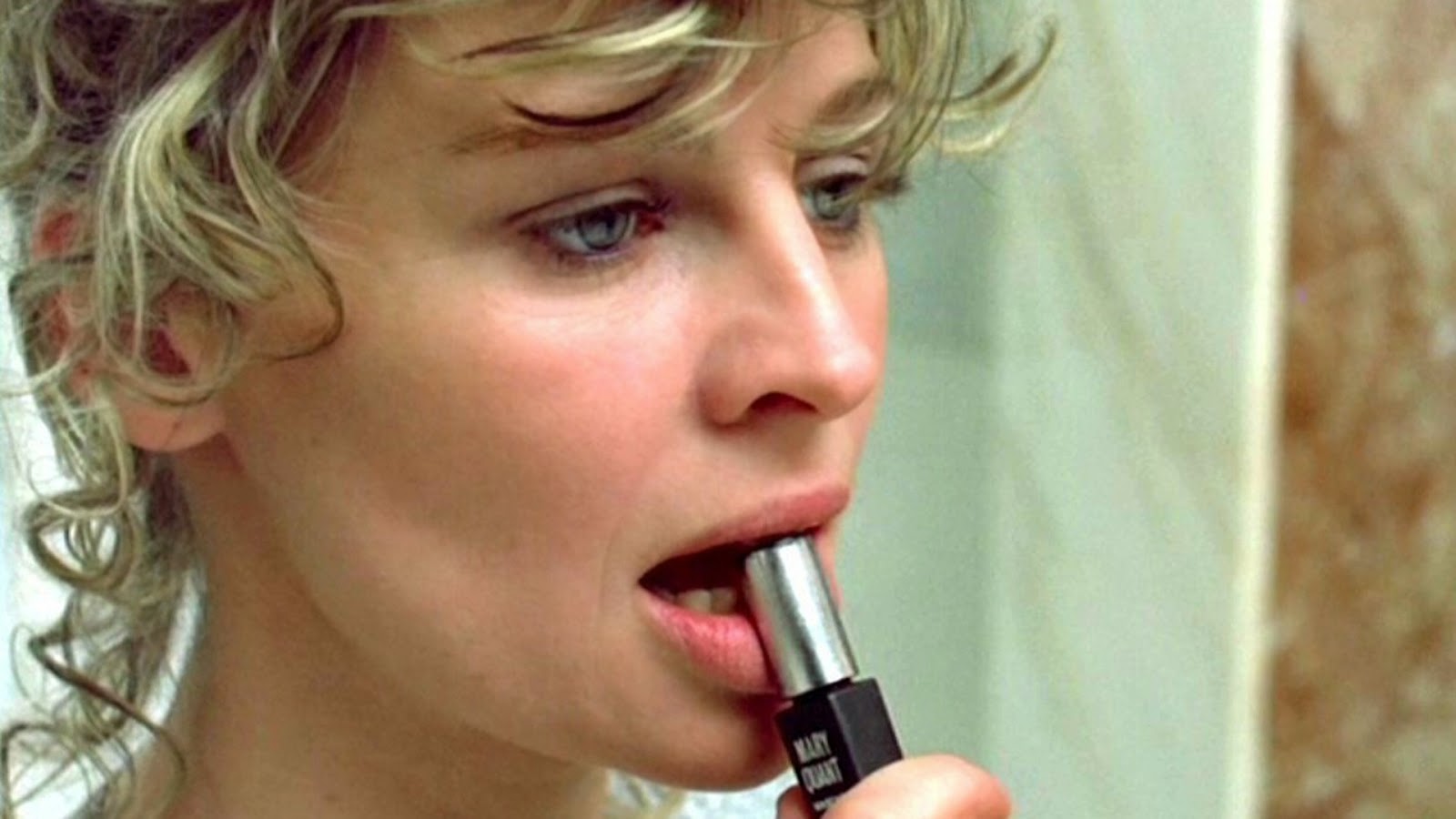 Skeptics, of course, rarely fare well in movies, and so John finds himself confronted by an increasingly hostile city (a murderer stalking the canals is but one threat) all while his senses appear to be failing him. Once again, you'll have to keep a close eye out for every detail, but don't forget to listen as well. “Don't Look Now” takes advantage of a wonderfully moody score by Pino Donaggio, but also makes the best use of silence and near-silence since “2001: A Space Odyssey.” Just as the city is largely devoid of people, the film features vast interior spaces with largely empty soundscapes, just a few isolated effects echoing in hollow chambers, rendering them sepulchral. Listen to the elaborate sequence where John nearly has a bad accident in the church for this film's finest sound design.

“Don't Look Now” is a film of thousand little frissons, perhaps not the stuff of nightmares but certainly of rough goosebumps. If it stumbles anywhere, even for a moment, it's in the divisive ending which I won't spoil for you here. Regardless, Roeg's masterpiece is a deftly conducted symphony, a virtually flawless coordination of cinematography, editing, performance, and writing. Every frame aches with sorrow with just a tinge of hope to keep everyone going.

Friends, this is what great cinema looks and sounds like. Great hair too. 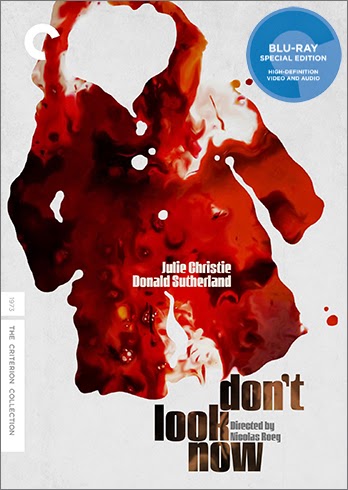 Video:
The film is presented in its original 1.85:1 aspect ratio . From Criterion: “Approved by Nicolas Roeg, this new digital transfer was created in 4K resolution on an ARRISCAN film scanner from the original camera negative at Deluxe Digital London.” Approved is not the same as “supervised” but we can still safely assume the image is true to the original intent. “Don't Look Now”has been released previously in SD. As is usually the case for Criterion, the image is slightly darker than previous transfers though perhaps that should read “is not as washed out as” previous transfers that boost and brighten as a short cut. The image isn't quite as grainy as I would have expected, but the image detail is sharp and the colors rich; those very select uses of red are as startling as they're meant to be.

Audio:
The linear PCM mono track provides a crisp lossless sound which really accentuates the subtleties of this remarkable audio design. Isolated sound effects in certain sequences are both distinct and hollow as they are meant to be. Donaggio's score also sounds great here. Optional English subtitles support the English audio.

Extras:
Criterion has cobbled together an eclectic mix of extras for this release.

The first two features are previously produced extras by Blue Underground. “'Don't Look Now' Looking Back” is a 2002 (19 min.) documentary mixing interviews with Roeg, cinematographer Anthony Richmond and editor Graeme Clifford. Worthwhile if not revelatory. “Death in Venice” (2006, 17 min.) is an interview with Donaggio who talks in detail about how a humble pop singer like him was chosen to do his first film score. Donaggio went on to fame in the business, known primarily for his work for Brian DePalma. I liked this piece a lot.

“Nicolas Roeg at Cine Lumiere” is a video recording of a Q&A session held in 2003 in London after a screening of “Don't Look Now.” It runs 47 minutes and is hosted by film writer Paul Ryan. Roeg is... elliptical in his responses though more straightforward when talking about how the “real” script for his prior film “Walkabout” was only 14 pages but he needed to fake a long one to satisfy financiers.

The rest of the features, aside from the Trailer, are new for this Criterion release.

“Something Interesting” (30 min.) combines interviews with Richmond, Julie Christie, Donald Sutherland and screenwriter Allan Scott. Scott discusses the script's development before Roeg was ever attached to the project. Sutherland relates a story about how he fought for a different ending for his character and was told in no uncertain terms who the auteur was on this project. Christie shares some of her discomfort with the film's ending.

“Nicolas Roeg: The Enigma of Film” (14 min.) is a gushing fan letter to Roeg from directors Steven Soderbergh and Danny Boyle. I appreciate their enthusiasm for one of their cinematic idols but this is pretty content free.

We also get a lengthy interview (43 min.) with editor Graeme Clifford, conducted by film writer and historian Bobbie O'Steen. I've only sampled the first fifteen minutes of this, but it is quite fascinating. This movie is certainly a study in pushing the limits of film editing.

The fold-out booklet has a large and very red map of Venice on one side. On the other we get an excellent essay by the estimable critic David Thompson.

Final Thoughts:
If Don King promoted “Don't Look Now” as a fight he would label it “The Menace in Venice.” I'll settle for calling it Nicolas Roeg's masterpiece (not that “Walkabout” is Swiss cheese) and one of my very favorite horror films. One of my favorite films in any genre, actually. It has never looked better than on this sharp 1080p transfer. The lack of a truly definitive extra feature is a mild disappointment, but the nearly three hours of extras that Criterion has included are quite good. Needless to say, this is highly recommended.
Posted by Christopher Long at 10:19 AM