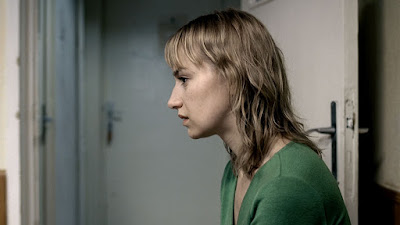 Set in 1987 at the tail end of the Ceausescu dictatorship in Romania, “4 Months, 3 Weeks, and 2 Days” (2007) concerns a young woman seeking an abortion in an authoritarian state that has all but outlawed the procedure. As if the basic subject wasn't thorny enough, writer/director Mungiu also chose to make the young woman rather difficult to like, or at least difficult to fully sympathize with. Gabita (Laura Vasiliu) is passive, forgetful, flighty, and relies almost entirely on her friend Otilia (Anamaria Marinca) to negotiate all of the details of a complex (and illegal) deal. Safe in the security of being the “unreliable one” in the relationship, Gabi exploits Otilia's courage and conscientiousness, with harrowing repercussions for both of them.

It's understandable then that Mungiu tells the story from Otilia's perspective. It's an inspired decision, as is the casting of Marinca who, making her film debut, delivers one of the best performances of recent years. Bristling with steely pragmatism, Otilia solves each new problem that comes up (even finding a hotel room is absurdly complicated), and plunges ahead when she feels vulnerable, intimidated, and even betrayed by Gabita. Though clearly under great stress, she holds herself together even when threatened by Dr. Bebe (Vlad Ivanov), the monstrous abortionist who demands a steep price for his services.

Mungiu and cinematographer Oleg Mutu certainly understand the power of framing. Once “Doctor” Bebe, having terrorized the women before performing the procedure on Gabi, finally leaves the seedy hotel room, the camera remains fixed solely on Otilia as she sits and tries to recover. In one of the film's several long takes, she speaks to the off-screen Gabi, trying to figure out why her friend made so many terrible decisions in this whole process and put them both in peril. Leaving Gabi's feeble responses off-screen vividly underscores the dynamic between the two women and makes Otilia seem all the more heroic when she responds not by lashing out, but by continuing to support her vulnerable friend. Otilia is the stronger one, and Gabi needs that strength. So Otilia gives it.

The film delivers another tour-de-force shot when Otilia reluctantly visits her boyfriend's family for a birthday party. In a single shot running over seven minutes, an understandably frazzled Otilia looks entirely alone at thecrowded dinner table, the tension ratcheting up with each passing second and soaring to near unbearable levels when we hear a phone ringing off-screen. It might be the still-recuperating Gabi calling for help, but Otilia cannot move to answer it and, perhaps at that particular moment, doesn't really want to.

Mungiu paints a convincing portrait of a corrupt surveillance state where the black market is not only an open secret, but operates more efficiently than the official bureaucracy. You can buy prohibited American cigarettes from virtually anyone, but you can't check into or leave even a no-star hotel without having your ID scrutinized. Trust is in short supply in Ceausescu's Romania, which makes Gabi all the luckier to have a true-blue friend like Otilia.

“4 Months, 3 Weeks, and 2 Days” hit the festival circuit just after fellow Romanian director Cristi Puiu's bleak-comedy “The Death of Mr. Lazarescu” (2005) wowed global audiences, and it won the Palme d'Or at the 2007 Cannes Festival. Its success prompted a full-blown critical frenzy over the emergence of the so-called Romanian New Wave. The very existence of a “new wave” was debated from the instant it was first dubbed – do a handful of directors constitute a wave and should they be lumped together simply because they're all from the same country and of roughly the same age?

A little more than a decade later, all we can say for sure it that Romania has produced more than its share of great films, and that Mungiu was no flash-in-the-pan, having directed several well-regarded movies since, most recently “Graduation”, also part of the Criterion Collection. None of them have been quite as nerve-racking as "4 Months..." but it's difficult to think of any film released since then that could clear such a high bar. 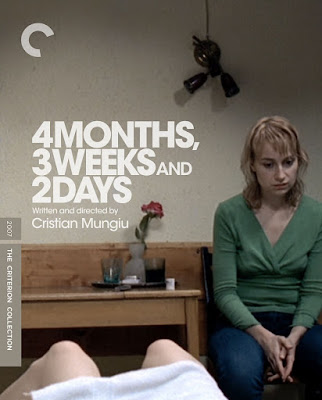 Video:
The film is presented in its original 2.35:1 aspect ratio. The image detail is sharp, and the rather drab color palette is faithfully rendered. This isn't a film that's meant to look beautiful, but this 1080p transfer is strong.

Audio:
The DTS-HD Master Audio 5.1 surround track isn't called on to do much. There's almost no music, and the sound design is spartan, but the audio is crisp and distortion-free. Optional English subtitles support the Romanian audio.

Extras:
Criterion has included an array of extras with this Blu-ray release.

First up is a 2016 interview with Mungiu (37 min.) in which he provides more historical context about late-'80s Romania and talks about the challenges and advantages of using many long takes, especially knowing there will be minimal post-production editing.

In another 2016 interview (24 min.), film critic Jay Weissberg talks both about the film and the broader Romanian New Wave movement.

Criterion has also included the entire press conference (44 min.) for the film from the 2007 Cannes Film Festival. The panel includes Mungiu and most of the cast.

We also get a 2007 documentary titled “The Romanian Tour.” The feature explains that there are few film theaters in Romania, so a tour was arranged for the film to be shown in various non-traditional venues. This documentary showcases both the people who conducted the tour (most of whom are German) as well as feedback from Romanian audience members, many of whom were seeing their first film in a theater in many years.

Final Thoughts:
I can't believe it's been more than ten years since “4 Months, 3 Weeks, and 2 Days” was the talk of the festival circuit. I actually have a flashbulb memory of the first time I watched this remarkable movie. Criterion has provided a strong transfer and a solid collection of extra to supplement their release of one of the landmark films of the 21st century.
Posted by Christopher Long at 7:36 AM