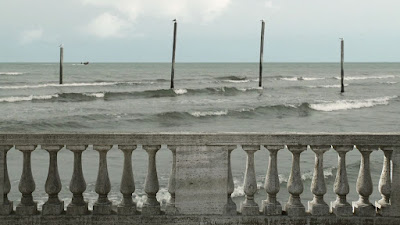 
As the late, way-beyond-great Abbas Kiarostami's final film, “24 Frames” (2017) can't help but stir up conflicting feelings. The posthumous release of the Iranian master's last feature partially fills the void left by his 2016 death from cancer, but however beautiful the movie is, it is also, as a title card shown in the film's final segment reminds us, the end.

“24 Frames” was a multi-year labor of love for Kiarostami, who was still editing the project on a laptop from his hospital bed. The film's structuring conceit is a deceptively simple one. A still image shows only a frozen split-second of time, but this only invites the viewer to speculate about the image. Where did it come from, and what happened next? Working with visual-effects artist Ali Kamali, Kiarostami begins with 24 still pictures and constructs a four-and-half minute film around each, imagining the events immediately preceding and/or following the still scene.

The film counts out the frames from 1 to 24. In Frame 1, Peter Breughel's famous 1565 painting, “Hunters in the Snow,” is augmented by animated smoke puffing from tiny village chimneys and a curious dog circling the party. The remaining 23 frames are all photographs taken by Kiarostami, including many largely-unpopulated landscapes with snowy woods and beach scenes particular favorites. In each short film, the still scene slowly comes to life, often due to the presence of digitally-added wildlife, crows streaking across the sky or cows tramping through the snow. Aside from Breughel's eponymous hunters, we see little sign of people until the halfway mark.

Sound design plays a major role as well. In Frame 21,probably my favorite of the shorts, we look through a thick window-shade at the silhouette of a tree listing in the wind. Loud off-screen footsteps indicate activity in the room, and then the shade is pulled up to reveal the nature landscape in its full glory. Classical music swells to create a surprisingly cathartic moment.

It's one of several shorts which initially requires viewers to guess what they're watching, details only gradually being fully revealed. Some of the shorts provide just the sketch of a narrative – a seagull may be standing vigil over a dead comrade or just taking a break while foraging. But most invite audiences simply to look and listen, sometimes at broad vistas (a roiling ocean of breaking waves) and sometimes through restricted viewpoints, such as Frame 14, an Edward Hopper-like image (I'm thinking “Rooms By The Sea” here) in which we peer out of a dingy room through a window at a partially-viewed event transpiring on the street.

Each short induces the quiet contemplation that fans have come to cherish in Kiarostami's work, and perhaps bring to mind Kiarostami's frequent claim that he doesn't mind one bit if viewers fall asleep during his movies. The shorts also amplify the continuing focus on the act of looking itself that became ever more prominent in the director's later work, such as “Shirin” (2008) in which the camera fixes on a series of women's faces as they watch a movie off-screen.

While I found watching “Shirin” an act of unbridled joy, “24 Frames,” while every bit as riveting, leaves me more uneasy. In “Shirin” the pleasure is in looking at real faces, and speculating about the thoughts and feelings playing out in their expressions in real time. “24 Frames” is, by contrast, largely an animated film, an act of manipulation rather than a record of reality. The final result is beautiful, hypnotic, and sometimes deeply moving, yet I can't help but feel a sense of loss, not just for Kiarostami, but for the power of the photographic image itself, the source of much of cinema's allure for over a century. I can't fully articulate the discomfort about this save to say, “But I don't wanna watch cartoons! I want real!” In the hands of a visionary like Kiarostami, these animation tools can produce something glorious, but there aren't any more Abbas Kiarostamis.

Instead of looking at “24 Frames” as a record of the transition of a medium, perhaps it's best to view the film as an ebullient showcase fora multifaceted artist. Kiarostami is best known by global audiences as a feature-film director, but he was also a graphic artist, a photographer, an illustrator of children's books, and a poet. “24 Frames” synthesizes these media and influences into a hybrid project like few others, and a final film that shows an accomplished artist who reached his peak several decades ago and never took so much as a single step down from the heights.

Is it too simplistic to say that while watching “24 Frames” I laughed and I cried? Well, I did. For a whole host of reasons. A week later, I haven't stopped thinking about it which is pretty much the effect most Kiarostami films have had on me. 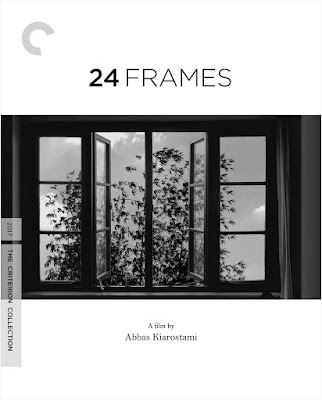 Video:
The film is presented in its original 1.78:1 aspect ratio. Considering that the movie consists largely of video animation, it's a little difficult to assess the video quality. It's sharp and has a smooth, glossy look which is probably true to the source.

Audio:
The DTS-HD Master Audio 5.1 surround track consists mostly of music and sound effects like footsteps, the flapping of bird wings, cows mooing, etc. It all sounds clear and provides a sense of dimension and atmosphere.

Extras:
Criterion has only included a few extras with this Blu-ray release, but they're all of interest.

In a short interview (8 min.), Ahmad Kiarostami, son of the late director, speaks about his role in shaping the final cut of the film. Abbas Kiarostami worked on many different “frames” (short films) for the project, but always planned to include just 24 in the film. When the director passed away, there were still 30 shorts being considered for inclusion. Ahmad wound up cutting out all the paintings except for the Breughel that starts the film.

In a short discussion (10 min.) film scholar Jamsheed Akrami and film critic Godfrey Cheshire discuss the film and the various influences from Kiarostami's career that helped to shape it.

We also get a short documentary (14 min.) by Kiarostami collaborator Salma Monshizadeh which shows Kiarostami at work on the project. Of particular interest are the scenes where we see the director working on shorts not included in the film, including his take on paintings like Millet's “The Gleaners” and Wyeth's “Christina's World.” I don't know if edited versions of these segments still exist, but it sure would be nice to see them as extras one day.

The slim fold-out insert booklet includes an exceptional essay by film critic Bilge Ebiri. Mr. Ebiri also recently took to Twitter to share the thoughts of another devoted fan of the film.

Final Thoughts:
Abbas Kiarostami was still innovating fifty years into his career. “24 Frames” is a remarkable final film from one of the world's greatest modern artists.

Posted by Christopher Long at 12:52 PM