Georges Franju's “Judex” (1963) isn't really about plot or characters or even action or making sense. Mostly it's about Musidora, or at least the effect the silent film actress had on a generation of French cinephiles. Musidora, née Jeanne Roques, starred in two very popular serial films by Louis Feuillade, as the sultry Irma Vep in “Les vampires” (1915) and as the equally sultry Diana Monti in “Judex” (1916). Her piercing dark eyes and willingness to slip into form-fitting leotards rendered her the supreme fetish figure for Surrealists like André Breton and for the other film junkies who first saw the serials at La Cinémathèque Française where the great programmer and archivist Henri Langlois championed Feuillade's work.The fact that Feuillade's films, despite their seemingly straightforward pulp adventure plots, played like fever dreams only heightened the erotically-charged Musidora effect, one obviously remembered vividly by director Georges Franju.

Franju had actually wanted to adapt “Fantômas” (1913), an earlier (Musidora-free) Feuillade serial, but the rights had been optioned, so he turned his attention to updating “Judex.” Except that updating isn't the right word. Where Feuillade's film felt futuristic, Franju's seems archaic; it's as if they meet somewhere in between 1915 and 1963 at a time that never existed.

While condensing the 12-part, 6-hour serial, Franju sticks close to the basics of the original. Judex is a masked crimefighter who threatens the corrupt banker Favraux with death if he does not atone for his crimes. Favraux's governess Marie-who-turns-out-to-be-Diana takes advantage of the feud by attempting to abscond with the ill-gotten funds. Whacky hijinks ensue.

In shaving off 210 minutes or so, Franju eliminates all the backstory along with any concern for motivation or logic. But he keeps all of the weird and usually tight costumes, adding a few of his own. Diana (Francine Bergé, then a relative neophyte) stalks around in an Emma Peel-style catsuit, switches to a men's tailored outfit, and later shows up disguised as a nun with a bird-shaped habit and a hypodermic needle. Diana winds up in a rooftop battle with a very curvy leotard-clad acrobat (Sylvia Koscina) who just happens to wander along with a few minutes left in the film and abruptly becomes a major player in the denouement, one of a vast array of dramatic rules for which Franju displays total disregard.

Franju has even greater disregard for Judex, the barely-existent protagonist played by American magician Channing Pollock. Pollock wasn't really an actor and barely spoke French, leaving him baffled through most of the shooting, but it doesn't really matter. Judex's only notable scenes exploit Pollock's sleight-of-hand talents as he produces a series of live pigeons from handkerchiefs and other sources. When the costumed avenger finally leaps into action at the end, he is almost instantly knocked out and tied up; once freed he still does little but stand around while the acrobat (who, I remind you, doesn't even appear until the final reel) takes care of business. Seen today, it might play like a dismissive parody of the super-hero, but I have no idea whether Franju had even the slightest interest in comic books.

So much for Judex. Franju mostly just wants to stuff women into tight outfits, and bless his soul for that, but he's also eager show off the otherwordly Edith Scob, his young muse who was so memorable as the disfigured daughter in Franju's “Eyes Without a Face” (1960). As Jacqueline, Favraux's innocent daughter, Scob isn't shoehorned into any skimpy uniforms, but with her thin swan neck and wide eyes she is a striking, unique presence who adds a charged mystique even to a thankless role which mostly involves her wandering hallways and being knocked unconscious.

“Judex” is a film built out of fetishes, but also flourishes. Like Feuillade, Franju has the ability to create truly bizarre images in a completely mundane fashion. In one scene, Judex's dogs scare off Jacqueline's would-be kidnappers, and a German shepherd casually places a protective paw atop the unconscious young woman as she lies sprawled on the ground. When Judex's prisoner throws his jacket at a surveillance camera, the jacket instantly goes up in a furious blaze. And in an inexplicably touching development, an undistinguished henchman suddenly discovers his long-lost father and, for just an instant, turns into the closest thing the movie has to a full-fledged character.

If you're the sort of viewer who needs moments like this to “add up,” you'll probably wind up feeling frustrated. Franju didn't give a damn about the math, just the moment. 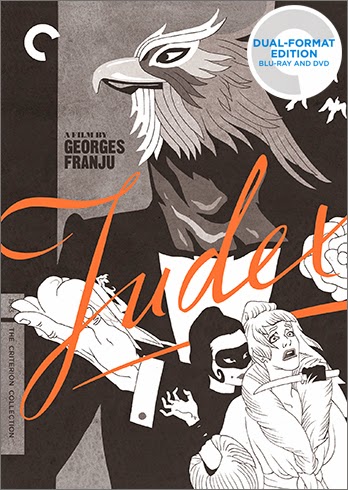 Video:
The film is presented in its original 1.66:1 aspect ratio. Vertical scratches on the edge of the frame are visible from time to time; it almost feels like an intentional nod to the film's silent film source material but perhaps it's just damage to the source print. In any case, it's not too bad and the 1080p transfer is otherwise quite strong with rich black-and-white contrast and a pleasant grainy look.

This is a dual-release format from Criterion with two DVDs (one with the film, the other with most of the extras) and a single Blu-ray. The SD transfer from the DVD has not been reviewed here.

Audio:
The linear PCM Mono track is simple and efficient. Though the film features an effective score by Maurice Jarre, the soundtrack is mostly silent for long stretches, lending greater importance to specific sound effects like bird chirps and creaking doors, each of which is separated out sharply on this mix. Optional English subtitles support the French audio.

Extras:
Criterion has included an impressive array of extras.


An interview with actress Francine Berge (2012, 11 min.) was recorded in Paris and doesn't include anything particularly revelatory, but her appreciation of Edith Scob's unique qualities is well-spoken. She also claims she was just about the only person who paid any attention to poor Channing Pollock.

An interview with Jacques Champeux(2007, 12 min.), co-screenwriter of the film and grandson of Louis Feuillade, provides some background regarding the development of the film. Apparently they were hoping to get Brigitte Bardot for the role of Diana and her curve-hugging outfits, but they didn't have the money.

"Franju, le visionnaire" (51 min.) is directed by Andre S. Labarthe and is a program which originally aired on Sep 2, 1998 as part of the French television program "Cinema, de notre temps." It cobbles together interviews with Franju recorded over a stretch of 23 years and includes clips from many films that North Americans may not have had a chance to see.

The disc also includes two short films directed by Georges Franju.
"Le grand Melies" (1952, 31 min.) gives Franju a chance to indulges his appreciation for pioneering filmmaker Georges Melies. In this rather melancholy pseudo-biopic, Melies's widow Jeanne D'Alcy plays herself while his son Andre Melies (who had a small role in "Judex") portrays his father.
"Hotel des invalides" (1951, 22 min.) is an antiwar documentary shot by Franju at a former Parisian military complex now turned into a museum and burial site. Narrator Michel Simon takes on a tour designed to show the futility of war.
The 26-page insert booklet includes an essay by critic Geoffrey O'Brien and a selection of writing by Franju about "Judex."
Final Thoughts:
Between the Scarlet Pimpernel and Zorro, there came Judex, costumed crime-fighter and all-around weirdo. He was kind of a dork in the 1916 Feuillade serial but still did some pretty neat things and the series still fascinated today because it feels like it could not have possibly been made when it was. In Franju's remake/fan appreciation, Judex is still a weirdo but he also doesn't really do anything except make a few pigeons appear. Fortunately Franju is definitely a weirdo himself and the film's strongest moments stem from his indulgence of various eccentricities. I'll take the serial any day, but this condensed re-dreaming is definitely worth watching.
Posted by Christopher Long at 12:32 PM