In the opening sequence of “Red River” (1948), a long wagon train scrapes across the Texas plain, a collective effort of man, animal, and machine all striving towards a common goal. Almost instantly one man announces his plans to break away from the group. Tom Dunson (John Wayne) wants to start his own cattle empire, and therefore has no intention of working for the communal good or even to look out for his best gal Fen (Coleen Gray) who he leaves behind despite desperate entreaties that turn into sutry promises: “The sun only shines half the time, Tom.”

No sale, lady. Tom's got his own destiny to manifest and, besides, Fen just can't provide for his needs like old Groot (Walter Brennan) can. Both a non-threatening sidekick and a surrogate father figure, Groot makes his unquestioning loyalty to Tom clear when he explains to the wagon train leader why he's also leaving: “Colonel, me and Dunson. Well, it's me and Dunson.” Try your best to read that in the reedy, pebbles-in-the-mouth Walter Brennan voice that helped define the great American Western.

The unquestioning nature of that loyalty is precisely what comes into question as the main story of “Red River” unfolds. Shortly after abandoning his fellow settlers, Dunson sees from a distance that they've been ambushed by Indians. Losing Fen like that really breaks him up for a few minutes, but he finds a quick replacement for her in the form of young Matthew Garth (who, once he grows up, will be played by Montgomery Clift), the sole survivor of the attack. Garth functions as an adopted son to the aspiring cattle baron and develops a loyalty to him almost as fierce as Groot's.

Dunson's business plan is straightforward enough. Find good land, proclaim it to be his, shoot anyone who says otherwise. Fast forward fifteen years and the herd is thriving, but the Dunson empire is not. The rugged individualist was incapable of imagining that his life could be affected by matters beyond his control, but the Civil War has ruined the Texas economy, prompting Dunson to drive his cattle to “Missourah” where prices are better. When others suggest that Kansas might be a safer and more profitable option, the inflexible Dunson reminds them who's in charge.

“Red River” initially portrays a world where men eagerly fall in step behind a charismatic strongman. Even when they question his decisions, Groot and Matthew back Tom at every step because that's just what men need to do in a hostile environment where even immaculate, unspoiled landscapes promise a threat beyond every hill and across every river.

But just when loyalty seems to be an entirely perverse and oppressive force in this world of might makes right, the film indicates that there are limits decent men won't cross. When Dunson wants to whip a man in his entourage for a grave mistake and, later, when he orders that deserters from the drive be hanged, his men refuse to help. Matthew reluctantly takes over the drive (thus becoming his own man) and even ol' Groot, dagnabbit, abandons poor, deluded Tom to his own fate. The mutiny may not be entirely altruistic (the cowboys might have been more compliant if they didn't fear their wages lost on a fool's errand) but it is heartening to see a group of men who do not merely fall back on the excuse that they were just following orders.

Director Howard Hawks became one of the earliest darlings of the French New Wave critics (sometimes referred to as Hitchcocko-Hawksians) which virtually necessitates that any discussion of his films take an auteurist slant. My knowledge of Hawks's career is woefully inadequate for such an analysis. I can only state that I am a great fan of his Westerns, of which “Red River” was the first, “Rio Bravo” (1959) the best, and “El Dorado” (1966) the most underappreciated.

Hawks is celebrated as a practitioner of the invisible style favored in classical Hollywood, short on ostentatious technique and motivated by the pragmatic needs of the narrative. There are still shots in “Red River” that call attention to themselves, like a near-360 degree pan of Dunson surveying his herd and the amazing long shot where Dunson reads the Bible over a man he's just killed while a passing cloud casts an angry-God shadow over the mountainside in the background, a wonderfully opportunistic on-the-fly capture by cinematographer Russell Harlan. But the relative lack of stylistic gymnastics is perhaps what makes it so easy for Hawks and super-editor Christian Nyby to seamlessly integrate studio-set campfire sequences with the luscious location footage.

“Red River” was adapted from a short novel (serialized in “The Saturday Evening Post”) by Borden Chase who co-wrote the script with Charles Schnee. The story isn't groundbreaking and isn't meant to be, but it provides Hawks and his team a useful template for conveying the epic story of a cattle drive (the first, as it turns out, to take place on what would become known as the Chisholm Trail) in the very personal terms of generational duty and conflict.

While the movie wouldn't work without the vividly drawn relationships and strong performances by Wayne, newcomer Clift, and the stalwart Brennan, its success as a rip-roaring adventure shouldn't be overlooked. The actors look a bit too neat and pretty for all their time spend amidst the beans and the cow dung, but the film still conveys the weight of such a grand and perilous undertaking; thousands of cattle and dozens of men limping across hundreds of miles of untamed land. It stirs the blood sufficiently to forgive an abrupt and unjustified ending clearly designed to sustain the Duke brand. 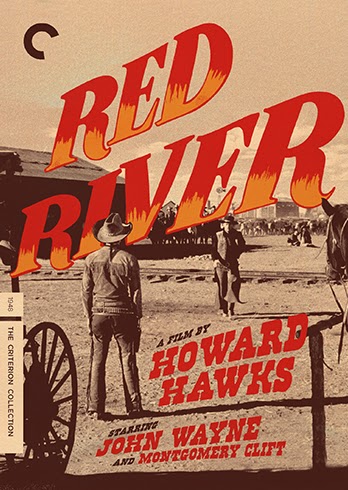 Video:
This is not only a dual-format release from Criterion, but also includes two versions of the film. There are two DVDs and two Blu-rays. On each format, the first disc includes the Theatrical Release of “Red River” (plus a few extras) and the second disc includes the longer Pre-Release version (plus some extras).

The Pre-Release version runs 133 minutes and was screened for preview audiences before Hawks made some last-minute edits for what would become his preferred Theatrical Release (127 min.) The primary difference is that the Pre-Release version presents book pages on screen as a narrative device, allowing viewers to read the descriptive passages before fading to the related action; in the Theatrical version all but one of the book pages is discarded and is replaced with voice-over by Walter Brennan. The Pre-Release version also has a longer ending though it is structurally very similar. Though Hawks always preferred the Theatrical, apparently at some point much later someone decided the longer edit must be the “director's cut” and this has been the version more commonly seen on television and on home video.

The film (in either version) is presented in its original 1.37:1 aspect ratio. The Criterion booklet relates the challenges of restoring the Theatrical cut which relied heavily on the pre-release print, but also required additional footage from a French 35 mm composite print. Perhaps if I went back and looked closer (especially at the scenes with Brennan's voice-over) I would notice a difference in quality from the varying source prints, but on my first viewing I can't say that anything stuck out. Image quality is strong throughout and whatever boosting was necessary to enhance the contrast does not appear to have interfered with the original image. A fine grain look enhances the rich black-and-white photography to create a pleasing if not quite razor sharp final product.

I didn't notice any difference in transfer quality between the two versions of the film, and did not have an opportunity to check the quality of the DVD transfers.

Audio:
The linear PCM mono track is rather flat, es expected, and the score by Dimitri Tiomkin sounds a little tinny at times, but not problematically so. Dialogue is all clearly mixed as are the other sound effects. Optional English subtitles support the English audio.

Extras:
Disc One includes the Theatrical Release (127 min.) of “Red River” along with a brief text feature explaining the difference between the Theatrical and Pre-Release versions (see above).

The disc also includes a 2014 interview (17 min.) with filmmaker Peter Bogdanovich in which he discusses the two versions of the film as well as the difficulties Hawks had with director Howard Hughes who threatened a lawsuit claiming that the ending too closely resembled “The Outlaw” (1943 – and yeah, that's the one with Jane Russell) on which Hawks had serves as uncredited co-director. The ending had to be re-edited extensively until it met with Hughes' approval.

We also get an audio excerpt of an interview Bogdanovich conducted with Hawks in Palm Spring in April 1972 (15 min.) The disc also includes a Trailer (2 min.)

The first extra on the disc is an interview with critic Molly Haskell (2014, 16 min.) in which she discusses issues of masculinity and gender as played out in the film. While I think Haskell is great I have to admit I skimmed through this one.

We also get a 2014 interview with scholar Lee Clark Mitchell (13 min.) who provides some general discussion about the Western genre and the adaptation of Borden Chase's novels. Perhaps I was in a sour mood but, once again, I skimmed through this feature as it seemed somewhat superficial although I'm sure it's difficult to provide in-depth analysis on such a broad subject in just thirteen minutes.

The disc also includes an audio excerpt of an interview of writer Borden Chase by Western scholar Jim Kitses. This 1969 interview (10 min.) provides a brief sense of what seems like a fascinating personality. Born Frank Fowler, Chase served as a driver for gangsters before realizing it wasn't really a profession with great long-term benefits and decided to become a writer. He didn't like some of the changes made to his novel for the film, and it's hard to blame him.

The last feature is an audio presentation of a “Lux Radio Theatre” performance of “Red River” which aired on Mar 7, 1949 (59 min.) and starred John Wayne, Walter Brennan, and Joanne Dru.

Perhaps the best extra of all, however, is the thick novella of Borden Chase's “Blazing Guns on the Chisholm Trail,” the source material for the movie. This 187-page book tucks into the thick slipcase next to the discs' keepcase, making for a substantial presence on the shelf.

Film Value:
I guess it's obligatory to mention John Ford's quote upon seeing his protege's star turn for Hawks: “I didn't know the big son of a bitch could act!” Ford's tongue may have been planted in cheek, but while Wayne's films with Ford at the helm certainly form the core of his body of work, two of his finest performances were on Hawks's watch with “Red River” and “Rio Bravo.” For me, a sketchy ending and some unconvincing supporting performances (specifically from Joanne Dru and John Ireland, both of whom I neglected even to mention above) keep me from fully embracing “Red River” as a masterpiece, but it's a damned fine Western which gives Wayne his first chance to push his tough guy persona to its sociopathic limits. This Criterion release could probably use a good commentary track, but with two versions of the film, a solid collection of extras, and a strong 1080p transfer, this easily qualifies as the definitive North American release of a classic film.
Posted by Christopher Long at 9:22 PM