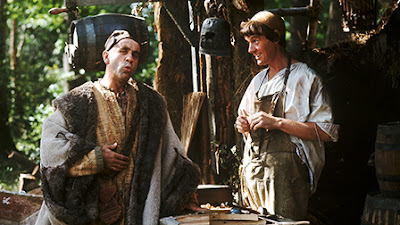 
Human beings are tautly-stretched sacks of blood and puss who spend most of their day consuming and excreting matter, just eating, pissing, farting, and crapping their short lives away. That appears to be Terry Gilliam's primary thesis in “Jabberwocky” (1977), and even if you're in the minority who stubbornly disputes such an obvious claim, his first solo film as director provides ample evidence to support it.

When the film's protagonist, Dennis Cooper (Michael Palin), a simple villager named for his family occupation (Cooper, not Dennis, I mean), sets to wooing his sweetheart Griselda (Annette Badland), she responds to his tender entreaties by gnawing on a rotten potato, scratching her ass, and unleashing the occasional bum blast. Griselda's father, Mr. Fishfinger (Warren Mitchell), also conducts a blithely casual conversation with young Dennis while taking a equally casual dump out of a window and into the polluted water below.

When Dennis sets out, quite accidentally, to become a hero and slay the mysterious and menacing Jabberwocky that terrifies the countryside, he plunges knee-deep into mountains of dung and wakes up to a drive-by golden shower or two. Meanwhile, King Bruno the Questionable (Max Wall) orders a glorious joust to determine a champion to fight the Jabberwocky, and the results of each heroic battle are depicted primarily by the various fluids spattered on the onlookers. Robert Bresson may have dealt a fatal blow to chivalry a few years earlier with “Lancelot du Lac” (1974), but Gilliam took great pleasure in dropping by to crap on its corpse.

Any adaptation of Lewis Carroll's “Jabberwocky” would necessarily be a loose one, but Gilliam actually works in much of the poem's text into his film and ultimately delivers a genuine monster “with eyes of flame.” Hero Dennis Cooper is not, however, a particularly “beamish boy” unless “beamish” means “a colossally dull bean-counter.”

Portrayed with as little personality as possible by Palin, Dennis embodies another horrifying aspect of humanity beyond their oozing, stinking bodies: a relentlessly unimaginative obsession with profit margins. Dennis's father (Paul Curran) takes great pride in crafting quality barrels, in loving and respecting the wood he works with, and is mortified to learn that his son can see nothing but the opportunity to cut corners in the name of competitive business. Alas, Dennis is more in tune with his times than dear old dad. The nobles and businessmen of the utterly wretched city to which Dennis ventures to make his fortune are in no great hurry to eliminate the Jabberwocky. The threat of having all their flesh flayed from their skeletons keeps the peasants at home, and thus willing to work for lower wages, and the general chill even sparks a bull market in commodities.

Gilliam surely selected a pre-sanitation medieval setting to emphasize the filth, but the film's depiction of the squalid state of humanity has a timeless quality. Give them a few centuries and these miserable wretches will be spewing their filth into the atmosphere. A few years after that, the corporate machinery of Gilliam's “Brazil” (1985) would be run by a legion of paper-pushing Dennis Coopers, and dreamers are about as welcome in the society of “Jabberwocky” as in “Brazil.” Aside from Dennis's father, nobody here seeks or even imagines a better way of life because, quite frankly, they don't deserve and aren't capable of anything better. You are what you shit.

“Jabberwocky” manifests the expected unevenness of a first film. It's phenomenal at depicting the grotesque (special shutout to Annette Badland for gamely embracing her caricatured role) but it's not particularly funny, especially not when Gilliam seems to reaching most emphatically for laughs, a shortcoming that leads to some tedious stretches. However, the idiosyncratic vision that would soon produce gems like “Time Bandits” (1981) and “Brazil” (1985) arrives almost fully formed in Gilliam's solo debut. And the monster, held back until the very end, is pretty darn cool too. 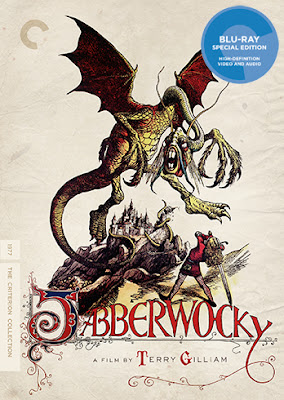 Video:
The film is presented in its original 1.85:1 aspect ratio. I only recall seeing “Jabberwocky” on the old 2001 Columbia DVD which was pretty flat and muddy looking. This recent restoration by the BFI National Archive and The Film Foundation works from the original 35 mm camera negative to produce an impressive 1080p image, sharp and richly textured throughout. It looks sharp in motion too. The color palette is fairly drab, but we're talking about Gilliam's version of the Middle Ages here – many piles of poop, few rainbows. All in all, this is a very strong high-def presentation.

Audio:
The DTS-HD Master Audio 5.1 mix is quite robust, effective with the sometimes elaborate sound effects (OK, by elaborate I sometimes mean sounds of suspicious 'plops' in the water) and the eclectic classical music mix. Optional English (SDH) subtitles support the English audio.

Extras:
The film is accompanied by an old 2001 audio commentary by Terry Gilliam and Michael Palin.

“Jabberwocky's Good Nonsense” (41 min.) mixes interviews with Gilliam, Palin, Annette Badland, and producer Sandy Lieberson. In sharing their reminiscences about the film's production, they cover mostly familiar ground with an emphasis on Gilliam's desire to break away from his Python roots in his first solo directorial effort.

In another interview (15 min.), special-effects artist and designer Valerie Charlton (co-credited for “Monster Creation” in the film) discusses the development of the film's title monster.

Cinematographer Terry Bedford (22 min.) also discusses his work with Gilliam on both “Holy Grail” and “Jabbewrocky” in these audio-only excerpts.

Criterion has also included the film's Original Opening. Gilliam changed the opening/title sequence for the film's U.S. release and settled on a hybrid version for home video release. This original U.K. Cut skips the paintings of the U.S. title sequence.

We also get a 2001 program which compares Gilliam's original sketches to the final screen version of several scenes.

Finally, in addition to a Trailer (1 min.), we also get a reading of the poem “Jabberwocky” by Palin and Badland.

Final Thoughts:
“Jabberwocky” is one of Gilliam's lesser efforts, but even if it's disappointingly short on laughs, it's a fascinating preview of the glorious visions to come from this one-of-a-kind director. Criterion's high-def transfer is stronger and the selection of extras is satisfying, if not overwhelming.
Posted by Christopher Long at 9:14 PM