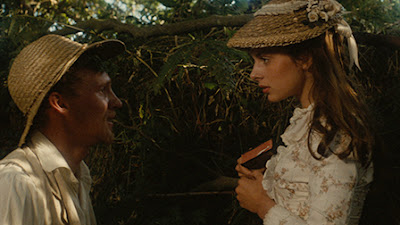 
I've never understood the current obsession with genealogical research. Everyone's probably got royal blood dripping from one of the upper branches of the family tree, but it's so diluted by now that any claim to kinship is about as meaningful as noting that we are all composed of atoms.

What's new is usually old, of course, and a fixation on even a distant lineage made more sense at a time when it was closely tied to property rights. Thus John Durbeyfield, a relatively happy and absolutely hard-drinking peasant from Wessex circa late 19th century, is thrilled to learn that he and his expansive family, all currently sharing a tiny shack, are descendants of the aristocratic D'Urberville line. Just like modern genealogists, he discovers that the knowledge does not bring even a whiff of either fame or fortune, but he's already gotten pretty wasted by then so no biggie.

The family's oldest daughter Tess (Nastassja Kinski) is dispatched to the nearest D'Urberville to see if they can claim at least a tiny part of their rightful inheritance, but her first interaction with so-called high society sets her on the inevitable path to destruction instead. A supposed cousin named Alec (Leigh Lawson) turns out only to have purchased the now-defunct blueblood name, but the sight of the lovely teenage Tess fills him with the desire to acquire a real D'Urberville as well. Tess fends off his advances nobly, but has no recourse when the suave seducer resorts to brute force. 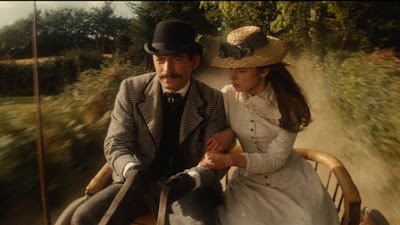 In Victorian England, Tess will, of course, suffer all of the consequences of the rape. She bears a child out of wedlock, and finds little sympathy from church or community after the baby dies. To spare her family the shame she flees to work on a dairy farm where she finds true love in the form of the idealistic, handsome Angel Clare (Peter Firth). He loves her too but his idealism does not, unfortunately, extend to forgiving his new wife after she confesses to her past “transgression” even though she has just forgiven him his own affair. Whacky hijinks do not ensue.

I admit that I found Thomas Hardy's “Tess of the d'Urbervilles” an excruciating experience when I read (most of) it in high school. Perhaps I would be more receptive today, but the lingering trauma keeps me from a second try. Director Roman Polanski, however, was fascinated by the book from the moment his wife Sharon Tate insisted that he read it. They both thought it would be a magnificent role for her, but Tate was murdered soon after.

Polanski shelved the project for nearly a decade and a “Chinatown” or two, but decided to return to the project with seventeen-year-old Kinski, then best known as the daughter of Werner Herzog's best fiend Klaus Kinski, in the title role. Though she had appeared in a few previous movies, “Tess” (1979) was Kinski's introduction to the international film circuit and it came with a modicum of controversy. Rumors of a romantic relationship with the director have been denied, though she was certainly his protege, studying acting with Lee Strasberg at his behest. More controversial was the notion of a German actress playing the very British Tess by the very British Thomas Hardy. 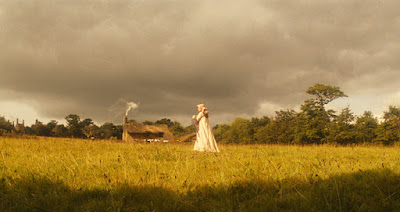 The concerns of Britain's cultural gatekeepers proved unfounded as Kinski adopted not only a convincing accent (the slight German inflection underscoring Tess's outsider status) but compellingly embodied the willful “pure woman” of Hardy's novel. For Polanski, the story of an innocent among predators was a natural choice, and if the film holds any surprises it's that the tasteful and lavish production comes off as rather tame, a contrast to the scandal that forced Hardy to self-censor his book. Though Polanski was able to show what Hardy could only hint at, the director doesn't linger on any salacious sequences (the rape is frightening, but not graphic) and the focus remains constantly on true-heart Tess and her fierce yet doomed resistance.

Cinematographers Geoffrey Unsworth and Ghislain Cloquet capture the sun-soaked French countryside (a splendid stand-in for Hardy's Wessex and environs) in all of its painterly glory, but no perfectly-sculpted landscape shot matches the beauty of Kinski's flawless face. It's extraordinary that a relative neophyte could project both fragility and strength with such naturalistic ease, though perhaps this is a case where genealogy comes in handy. Lawson and Firth are convincing enough, but their pitiful displays of manhood, one an outright cad and the other equally reprehensible in his cowardly hypocrisy, render them unfit to share the screen and the story with Tess. This is Kinski's show and she flat out steals it. 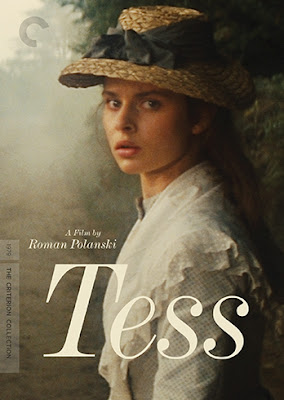 Video:
The film is presented in its original 2.35:1 aspect ratio. The image looks just a bit soft at times and the image detail doesn't jump off the screen the way it does in some Criterion 1080p transfers, but that slightly softer look may have been part of the film's visual design. Grain is present but not too noticeable. Colors are universally vibrant as the film clearly delineates the different seasons. The net result is quite beautiful, if not quite immaculate.

This is a dual-format release which includes two DVDs (with film and extras) as well as a single Blu-ray (with everything). The SD transfer has not been reviewed here.

Audio:
The DTS-HD Master Audio 5.1 track is fairly robust though not particularly dynamic. Perhaps the lossless audio stands out most in its treatment of the score by Philippe Sarde. Optional English subtitles support the English audio.

Extras:
“Tess” may not occupy the same exalted status in Polanski's oeuvre as “Chinatown” or “Rosemary's Baby,” but Criterion has still given it the deluxe treatment.

The collection starts with a 1979 episode of the French television program “Ciné regards” (49 min.) which includes behind-the-scenes footage from the film intermixed with an interview with Polanski. I found this feature both meandering and ponderous and gave up around the twenty minute mark.

Unfortunately I felt the same way about the plodding “Once Upon a Time... 'Tess'” which is a 2006 documentary that looks back on the making of “Tess” through interviews with Polanski, Kinski, producer Claude Berri, actor Leigh Lawson and others. At one point the documentary narrator states quite matter-of-factly that “Tess” was shot “in 1978 and 1979, the most pivotal years of the twentieth century.” I assume this claim has something to do with the Bee Gees.

I'm sorry to be a downer yet again, but I didn't make it too long into an episode of the BBC's “The South Bank Show” (1979, 50 min.) I had to pull the plug early when host Melvyn Bragg described the rape allegations against Polanski as “just another chapter” in his life story.

The disc also includes three short 2004 documentaries by director Laurent Bouzereau about the making of “Tess.” “From Novel to Screen” (28 min.) is by far the most interesting of the lot featuring Polanski discussing the genesis of the project as well as other experts addressing the censorship problems Thomas Hardy encountered when his book was first serialized in 1891; it eventually netted him a tidy sum. “Filming Tess” (26 min.) is a broad but engaging look at the production. “'Tess' The Experience” (26 min.) functions mostly as an unnecessary catch-all for whatever interview snippets didn't fit into the first two features, consisting of whatever gossip and minutiae is mentioned by the subjects involved with an emphasis on what a happy family everyone was during shooting.

Final Thoughts:
The tasteful and relatively staid period picture was perfectly suited to the Academy's tastes, earning six total nominations (including Best Picture and Best Director) with victories for Best Cinematography, Best Art Design, and Best Costume Design. This was the year wizened Academy voters mistook the absurd “Ordinary People” for a masterwork, but that's not Polanski's fault. Though nobody knew it at the time, the release of “Tess” marked the beginning of a fallow period for the director; his next feature wouldn't be released until 1986 and “Pirates” was not exactly viewed as a return to form from the master. “Tess” is not one of his greatest films and might strain patience at just under three hours, but Nastassja Kinski's performance is impressive and the knockout cinematography shines through in this high-def release.
Posted by Christopher Long at 8:19 PM