A Touch Of Sin


It's both exciting and confusing when a filmmaker appears to make a decisive break with his previous work, complicating the picture for critics who thought they had him conveniently pigeonholed. Jim Jarmusch caused plenty of consternation with the release of his revisionist Western “Dead Man” (1996). While he certainly laced his entry in the quintessential American genre with his trademark deadpan humor, the easy-going satirist had made a surprisingly violent film, a scabrous indictment of the genocide inflicted by “stupid fucking white men” on Native Americans. Blood spurted, skulls were crushed, and bodies piled up in this nightmare on earth. Fans looking for the gentle laughs of “Down By Law” didn't quite know what to do, and a few former critical boosters (like Roger Ebert) took the opportunity to jump ship.

“A Touch of Sin” (2013) is, at least in some ways, director Jia Zhangke's “Dead Man.” There are noteworthy parallels between Jia and Jarmusch, though they shouldn't be overstated. Both directors cite Robert Bresson as a formative influence and both have often been attracted to marginalized protagonists surviving on the fringes of urban society. Like Jarmusch (born in 1953), Jia (born in 1970) is viewed as one of the defining figures of his generation's independent film movement; bootleg copies of Jia's heavily censored early films like “Pickpocket” (1997) changed hands regularly on the Chinese black market and inspired legions of cineastes from Jia's home province of Shanxi all the way to Beijing (and even attracted financial support from Takeshi Kitano's production company in Tokyo).

From the festival breakthrough “Platform” (2000) through critically praised works such as “The World” (2004) and “Still Life” (2006), Jia established himself as one of the preeminent chroniclers of China's rapid transformation to an industrial and capitalist economy, a globe-altering metamorphosis that displaced millions of Chinese citizens. Jia's characters face off against forces too big even to acknowledge their existence, but while his movies are inevitably tinged with a sense of sorrowful resignation, they also became increasingly playful, occasionally outright hilarious. They have also been, to the exasperation of many “slow cinema” skeptics, long on patient observation and short on dramatic incident.

“A Touch of Sin,” by contrast, plunges headlong into incident: no fatalistic watching and waiting here. In the first few minutes, a man on a motorcycle is accosted by thugs armed with hammers and axes; his handgun wins the day and initiates a body count that reaches double digits. And he's not even the main character of the opening section of a film organized into four separate but loosely connected segments (another Jarmuschian parallel, though JJ doesn't exactly own the format).

That honor belongs to Dahai (Jiang Wu), a former coal miner turned social crusader in Shanxi who rages against the corruption of local officials who sold the publicly-held mine and clung very privately to the profits. Brash and loud-mouthed, he has probably never been good at winning friends and influencing people, but he does his best to funnel his furious protests through official channels before personally confronting the big boss, a meeting that winds up with Dahai being savagely beaten with a shovel wielded by one of the boss's thugs. Whether spurred by his head trauma or his innate obstinacy, Dahai grabs a shotgun and cuts a bloody swath through town starting with a low-level crooked accountant and ending with the money-grubbing politicos at the top.

Like most of the violence in the film, the shootings are artfully and artificially staged. Heads explode, bodies launch through the air on wires, geysers of blood soak clothing and walls. Nothing coy here, but also nothing particularly realistic. These are movie murders and Jia makes overt references to films most Western viewers (including yours truly) aren't too familiar with; the movie's English title is a pun on King Hu's popular wuxia (martial arts) film “A Touch of Zen” (1971).

Jia loves to collapse the barriers between documentary and fiction, and freely mixes surrealism with naturalism. That's not quite what he's up to here, but it might explain the movie's abrupt detours into full-blown “movie-dom.” In the third segment, Xiaoyu (Zhao Tao, Jia's long-time muse and now wife) works in the “Nightcomer Sauna” as a receptionist. A pushy businessman mistakes her for something else and won't take no for an answer as he insists on a “massage.” The otherwise passive Xiaoyu reaches in her purse for a switchblade and, posing like an avenging angel from one of a host of wuxia films, slices the abusive john to bits, then wanders the streets in a daze, drenched head to toe in blood. I've spoken to some viewers who find moments like this distracting or phony, but they're intended to disrupt the apparent realism of each situation, though with my lack of familiarity with the cultural touchstones Jia references, I'm reluctant to guess precisely what his motivations are.

All four of the movie's major stories are drawn loosely from real-life incidents in China that went largely ignored by the state-controlled media. I don't know enough to claim that violent crime has become more common in China over the past decade or two, but “A Touch of Sin” definitely portrays a nation traumatized by upheaval, with money being the root of all brutality. In the final segment, a feckless but generally well-meaning teenager (Luo Lanshan) loses his soul to the twin destructive forces of young love and factory work, Jia's response to a rash of suicides by assembly-line employees at the multinational corporations that rushed in to exploit cheap Chinese labor. The protagonist of the second segment (Wang Baoqiang, also the motorcyclist from the opening) may be the most damaged character of all, but his dysfunction is more difficult to link to current events: he is a killer who likes to shoot guns because everything else (including village life with his family) is too boring. Perhaps the fresh whiff of prosperity, tantalizingly out of reach by legal means, has made it difficult for him to play by the rules anymore.

I should note that I haven't seen Jia's first film “Pickpocket” so it's possible that what I'm describing as a major departure is a return to roots. However, “A Touch of Sin” is not only much more graphic than Jia's previous 21st century movies, it also moves at a more relentless pace with few of the long, contemplative takes that have marked most of his work. The movie races from one violent eruption to the next, and the sense of inevitable tragedy builds implacably. There are still a few moments of Jia-esque humor (Dahai, in the midst of his righteous rampage, prepares to kick down a door but stumbles when startled by a phone ringing off-screen) but everyone here is just circling the black hole at the center of capitalist China, waiting to spiral into its gravity well and be torn to shreds.

It's all quite a shock for a Jia fan expecting more “Still Life” and it's a challenge to process. It might be my least favorite of his movies, but I still count it as one of the best films of 2013 which should tell you what I think of this extraordinary filmmaker. I can't wait to see whether this marks a new turn in Jia's career, or if it will turn to be a bracing exception. 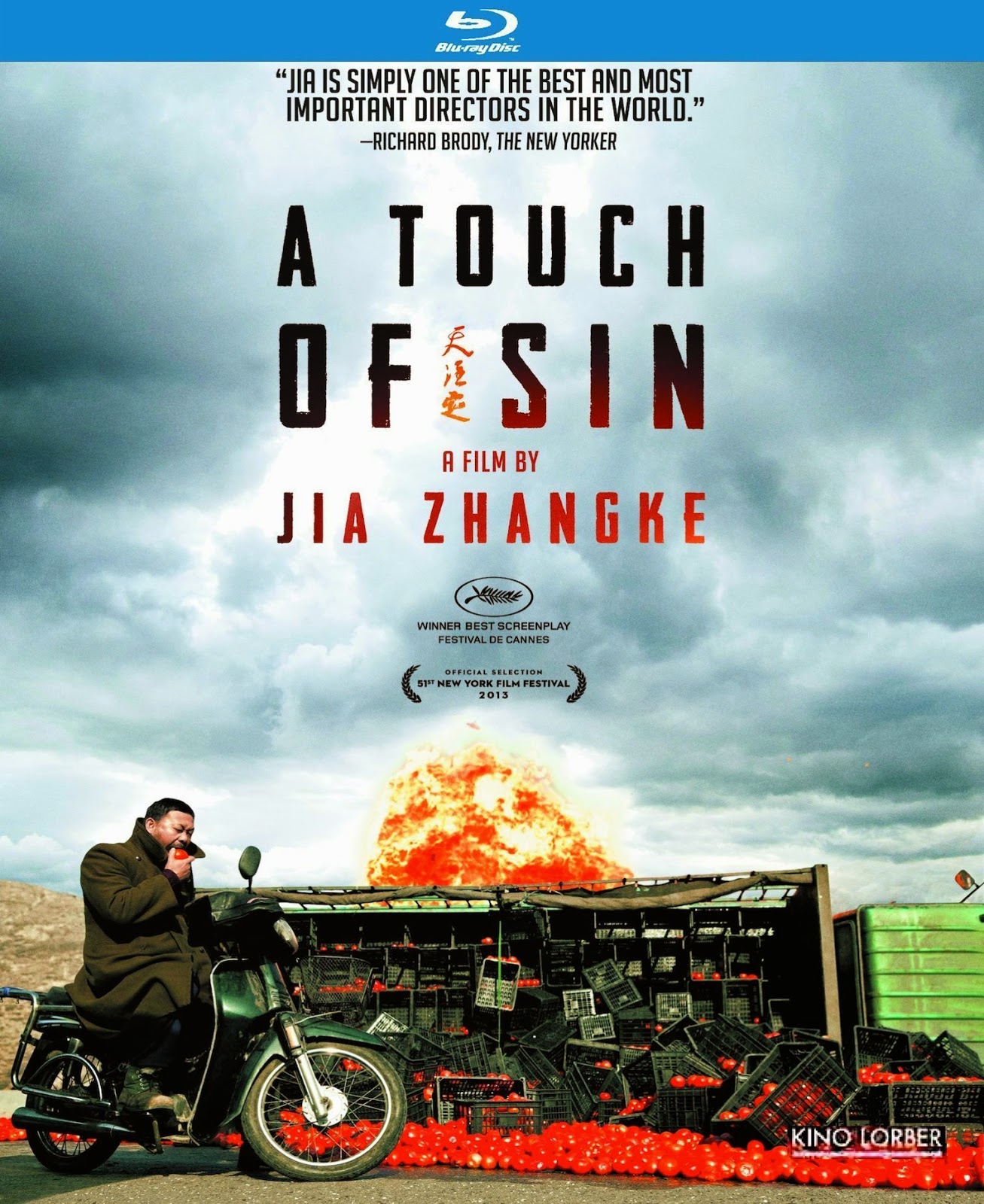 Video:
The film is presented in a 2.35:1 aspect ratio. This high-def transfer from Kino Lorber has the slightly soft look of a movie originally shot on HD with the occasional instance of digital blurring in scenes with rapid motion, but nothing significant that would detract from the viewing experience. Image detail is sharp throughout and colors are vibrant, though the film (shot by Jia's long-time collaborator Yu Lik-wai) is not exactly meant to look beautiful. The look ranges from drab (a lonely, ignored statue of Mao overlooks a declining town square in Shanxi) to gaudy (a nightclub/sex fantasy room made up to look like a train car reserved for party officials) and the 1080p image presents it all vividly, though with a few flaws.

Audio:
The DTS-HD Master Audio 5.1 soundtrack is crisp and has a convincing sense of depth; gunplay almost overwhelms the speakers at times. The sound is as angry as the story at times. Optional English subtitles support the Mandarin and Cantonese dialogue.

Extras:
All we get are five trailer for films from Kino Lorber.

Final Thoughts:
In my review of “Still Life,” I described Jia Zhangke as my favorite under-50 director. I've had no reason to revise that claim. “A Touch of Sin” may be his most accessible movie, admittedly an ambiguous description. It won Best Screenplay for Jia at Cannes in 2013 and placed highly on most year-end critical polls. Unfortunately this is a bare-bones release from Kino Lorber, but it's great to have this available to more viewers. Everyone needs “A Touch of Sin.”
Posted by Christopher Long at 5:31 PM