At first blush, Johnnie To's “Throw Down” (2004) appears to be the rare martial-arts movie in which nothing much is at stake. Cocky young Tony (Aaron Kwok) challenges the best judo fighters in Hong Kong not to seek revenge for a past slight or to restore honor to his family name. Nobody will live or die based on the outcome of these bouts; heck, there isn't even a cheap tin trophy cup on the line. Tony just wants to fight because it's fun, and the big goofy grin on his face when he has the chance to spar against a worthy opponent speaks of the sheer kinetic thrill of the moment, the rare opportunity to test your skills and feel alive, the chance to really just, well, throw down.

Tony particularly craves a match with Szeto Bo (Louis Koo), a celebrated former judo champion turned karaoke bar manager. Szeto, however, is mostly in grappling with his next glass of whiskey or pulling of his next scam, as he sinks deeper into depression every day. Tony tries to bolster Szeto's spirits (he needs him in peak fighting shape, after all) and is joined in the endeavor by the high-spirited Mona (Cherry Ying), an aspiring singer/actress eager for a life free of a manager who'd rather be her pimp. Szeto resists with a masochistic stubbornness familiar to anyone who has wallowed in their own misery for years, but Tony, Mona, and several supporting characters refuse to give up. Soon it becomes apparent that the stakes in “Thrown Down” are actually quite high - nothing less than the redemption of a lost soul.

To hurtles into each scene as if it's the only moment that ever existed, sometimes with disorienting results. Shortly after they all meet, Szeto leads Tony and Mona to an arcade where, for some reason, he insists that Tony play a Mortal Kombat-style game, something the young man does with his usual ferocity, attracting attention from the other gamers. The whole sequence then abruptly shifts into a heist, one that hasn't so much as been hinted at before, but Szeto knows his plan and the audience can just catch on at their own pace. Character introductions are handled with efficiency as well. We meet Mona as she blissfully slurps a bowl of noodles while being harangued by the furious landlady who has just evicted her, instantly establishing both her predicament and her personality with no wasted set-up.

The film also provides no obvious clues as to why Szeto is so depressed, until a sudden late revelation, and by then it hardly matters. OK, it matters quite a bit, but of far greater significance is the devotion of so many of Szeto's friends (some old, some new, all equally supportive) to his rehabilitation. Even the mobster Szeto rips off at the arcade wants to help and, oh by the way, he wants to fight too. Almost everybody in the movie is crazy about judo, a bit of a joke by the filmmakers since judo isn't particularly popular in Hong Kong.

While “Thrown Down” features several rousing judo fights, both one-on-one matches and chaotic mass street rumbles, its central appeal rests on its emphasis on the healing power of friendship. A charming sequence in which the three main characters join forces to rescue a red balloon trapped in a tree, only to immediately release it to the heavens, captures the true essence of this sweet and idiosyncratic film, a genre mashup both melancholic and life-affirming.

A relative lack of exposition (relative to Hollywood narrative, at least) may make “Throw Down” occasionally frustrating for viewers who always want to know why characters are doing what they're doing. But once you realize you can trust the filmmakers to be sincere, true both to the characters and to the audience, you can just relax and live in the moment, like the film does. 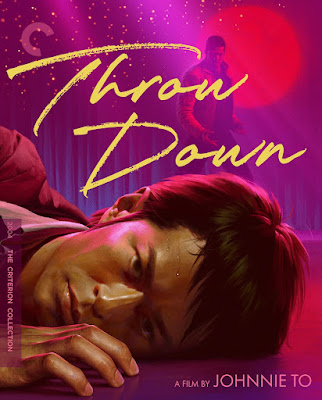 The film is presented in its original 2.35:1 aspect ratio from a “new 4K digital transfer.” The 1080p transfer is sharp with deep, rich colors. No noticeable issues with another top-flight Criterion transfer.

The DTS-HD Master 5.1 surround track is clean and efficient, and sounds great even in some of the messy crowd/fight scenes. Optional English subtitles support the Cantonese dialogue.

The collection starts with a 2004 interview (40 min.) with Johnnie To, in which he discusses the genesis and development of “Throw Down.” The disc also includes a 2004 “Making Of” featurette (11 min.) which is mostly a promotional film that doesn't offer too much insight.

The new features consist of four interviews conducted by Criterion. First up is screenwriter Yau Nai-Hoi who talks about how the script was originally a light comedy which To wanted to develop into something more nuanced. He also speaks about To's propensity to improvise on set. Composer Peter Kam (11 min.) credits To with a natural musical rhythm in his pacing of scenes, while echoing Yau's comments about To's preference for making changes on set.

Criterion has also invited two film scholars to contribute. David Bordwell (21 min.) speaks about some of the differences in the film's narrative and editing vs. more standard Hollywood approaches. Caroline Guo (12 min.) discusses how atypical “Throw Down” both in terms of genre conventions and compared to most of To's other work.

The extras wrap up with a Trailer (2 ½ minutes).

The fold-out insert booklet features an essay by film critic Sean Gilman, who discusses both the film and To's prolific output in the late '90s and early 2000s.

Johnnie To also styles “Thrown Down” as an overt homage to Akira Kurosawawa, particularly his early judo film “Sanshiro Sugata” (1943). This only adds to the film's upbeat message. “Throw Down” is ultimately a great hang-out movie, with unlikely friends finding pleasure in each other's company, just chilling and helping each other out. Who wouldn't want to throw down with that?

Posted by Christopher Long at 2:12 PM