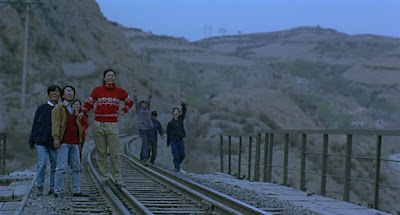 Jia may be my favorite filmmaker of the 21st century, so I'm posting a few reviews intended to encourage viewers to check out these extraordinary films while they're available on such a great platform. And speaking of Platforms...

“Platform” is history writ small. Though the Cultural Revolution “officially” ended with Mao Zedong’s death in 1976, Mao’s influence on Chinese culture was still enormous in 1979 when “Platform” begins. In the opening scene, the Fenyang Peasant Culture Group performs a tacky play in which the actors portray the various cars in a train as it pulls into Mao’s hometown of Shaoshan. They have doubtless performed the play hundreds of times, and are resigned to performing it many times again all for the glory of the late, great Chairman.

But life in China is about to change significantly. Deng Xaoping, desperate both to distance himself from the “misguided” policies of Chairman Mao and to improve China’s competitive position in the global arena, opened up China’s culture and economy in the 1980s. New ideas, new fashions and new popular culture flooded into the People’s Republic from Taiwan, Hong Kong, and points much farther west.

The title “Platform” refers to a Chinese pop hit from the early 1980s, and music plays a central role in the film. One night, the troupe members huddle around a radio as it picks up a faint pop song from a Taiwanese radio station. Later, one of them gets hold of a cassette tape of rock-and-roll music, and just as paranoid parents in many 1950s films warned us, rock music encourages the kids to run wild. OK, maybe not exactly wild, but a transformation has begun. In just a few years, the Fenyang Peasant Culture Group becomes the All Star Rock ‘n Breakdance Band and the members of the troupe swap their Little Red Books for electric guitars (the film actually opens with a burst of electronic feedback which then turns into a traditional Chinese melody).

If I haven’t discussed any of the characters so far, there’s a reason. It’s not that we don’t get to know any of them. Mingliang (Wang Hongwei, a frequent Jia collaborator) is the protagonist and his faltering relationship with not-quite girlfriend Yin Ruijuan (Zhao Tao – Jia's muse and future wife, making her film debut) is the only narrative strand that runs through the entire film. Singer Zhong Ping (Yang Tianyi) and her boyfriend Zhang Jun (Laing Jingdong) are more of an official couple, but have plenty of their own problems along the way. But Jia’s main focus is not on any one character, but rather the changes that occur to the entire troupe, which serves as a stand-in for the broader changes in China in the 1980s, the decade in which Jia (born in 1970) came of age.

The characters are all in their 20s during this pivotal period in Chinese history, and they’re trapped between a Maoist heritage they are only distantly familiar with and a budding capitalism that is courted, but never fully welcomed, in China. The film focuses on this sense of suspension between conflicting ideas or lifestyles. Is it OK to pursue individualistic, materialistic goals? Their parents certainly don’t think so, creating even more tension. Besides, exactly how “open” is Deng’s new China anyway?

Here is a valuable geography lesson for you: China is a big country. “Platform” is not just a Chinese film, but more specifically is set in Shanxi province, in Jia’s hometown of Fenyang, west of Beijing (Jia's first three films are sometimes called his “Hometown Trilogy”). All the characters speak in Shanxi dialect. When Mingliang returns from a trip down south, his friends ask him if the food was any good there. “Yes, but not as good as here.” There’s no cooking like home cooking.

Transportation is another major theme in the film (“Platform” also refers to a train platform) and the characters travel often: by foot, by bus, by train. But every journey is an endless circle which always brings them back home. Even more disturbing, though, is the fact that home is constantly changing. New freedom may (or may not) be liberating, but it's also destabilizing. The future holds promise, but has also never seemed more uncertain. Though they have shucked off the trappings of Mao Zedong Thought, the characters have taken on new burdens and new responsibilities. It’s not easy to keep on rocking in the not-quite free world.

Jia shoots most of the film in long, master shots, his camera only seldom moving in close to the characters. Each scene plays out as a discrete episode that could be a short film unto itself. Some viewers might be put off both by the film’s leisurely pace and its lack of any obvious narrative drive. I was absorbed by it all, but I sometimes found it difficult to keep track of each character’s story.

“Platform” was Jia's second feature film, though the first movie that many festival audiences and critics saw as “Xiao Wu” (AKA “Pickpocket”) received a more limited release. I didn't fully appreciate it at the time, but today I see it as one of his best, along with “The World” and “Still Life” (two of my favorite films of all-time). Like all of Jia's work, “Platform” demands patience and effort from viewers, but meet it halfway and I think you will be amply rewarded.

Posted by Christopher Long at 8:04 PM