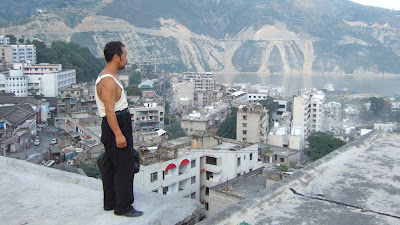 Jia may be my favorite filmmaker of the 21st century, so I'm posting a few reviews intended to encourage viewers to check out these extraordinary films while they're available on such a great platform.

Writer-director Jia Zhangke is perhaps the most prominent member of the Sixth Generation of Chinese filmmakers; he also happens to be one of the very best filmmakers working today. His first breakthrough hit on the festival circuit was “Platform” (2000) and he sealed his reputation as a modern master with 2004’s “The World”, the best movie ever made about cell phones.

Jia’s career continued to soar, and in 2006 he exploded onto everyone’s radar by winning the Golden Lion in Venice with “Still Life.” “Platform” was set in Jia’s hometown province of Shanxi in central China. In “Still Life” he sends two Shanxi natives south to Fengjie along the Yangtze River. Like many areas along the river, most of the residents of Fengjie have been displaced by the massive Three Gorges Dam project, now the largest power station in the world.

Coal miner Han Sanming (Han Sanming, a real-life coal miner who had small roles in earlier Jia films) has come to Fengjie to find his ex-wife and daughter, neither of whom he has seen in sixteen years. Treated in a largely separate story, nurse Shen Hong (Zhao Tao, Jia's frequent collaborator and now his wife) comes searching for her estranged husband. Both of these seekers will have to be very patient, as will viewers.

The only growth business left in the 2000-year-old town is demolition. Unable to locate his wife at her now submerged address (“See that island? That’s your town.”), Han settles for work on a crew while he waits for his wife to return. There’s really not much left to do in Fengjie except to wait. Shen Hong has to wait too, as her husband is a big-time boss (of the demolition company) who is difficult to track down. She whiles the time with one of her husband’s friends and glides along the fringes of the local business community.

As is usually the case with Jia, plot recedes into the background as time and location are emphasized. Working with high-def video, Jia and his great cinematographer Yu Lik-wai explore the environment so thoroughly and with such attention to detail that “Still Life” has the feel of a documentary, which is not a coincidence since Jia simultaneously shot the documentary “Dong” (2006) in the same setting. Nominally about painter Liu Xiaodong, the documentary rambles freely, sometimes observing Liu at work, and other times simply roving through the city. The two lead characters from “Still Life” wander through the documentary at different points as Jia’s fictional universe bleeds into his non-fictional one. One shot is even repeated in both movies. Jia isn’t necessarily making a formal point about the two modes of filmmaking so much as he is telling one unified story from multiple perspectives that are readily interchangeable.

In his early works, Jia could loosely be described as a neo-realist but beginning with “The World” he tapped into a more fanciful sensibility. In “The World” he used animated sequences when characters texted each other on their phones. In “Still Life” he blurs another boundary as live-action (“real”) settings suddenly become animated. A UFO abruptly shows up in one scene, providing an unlikely transition from Han’s story to Shen’s. It is never mentioned again. In another shot, a tall building in the background shrugs off its foundation and launches into the sky like a rocket ship. Why? According to Jia, it just looked like a rocket ship. Simple enough.

This playfulness reflects a generosity of spirit that imbues even the drabbest of Jia’s settings with a sense of vibrancy. Fengjie may be in the process of being sucked into the maelstrom of the Three Gorges Dam but the city and the countryside still shine like jewels. The beautiful river and hills always lurk in the background whether partly shrouded by polluted skies or shown in full bloom on a rare crystal clear day.

The people of Fengjie also refuse to go gentle into that good night. Even with limited options for work and play, they do their best to thrive. A boy shows up from time to time to whistle a tune and bum a smoke; he breezes through life just fine. Han also befriends a young man who models his every mannerism after Hong Kong movie star Chow Yun-Fat. He’s a wanna-be gangster with a smile and a snappy way of lighting a cigarette. Their budding friendship leads to yet another great cell phone scene in Jia’s oeuvre when the two exchange numbers and ring tones, setting up a powerful payoff later on.

Exchange is another major theme in the film as the characters trade luxury items with each other. Jia even uses on-screen titles to divide the film (very loosely) into chapters: cigarettes, tea, liquor, and toffee (or candy.) According to the director, these are items that were all strictly rationed in the past and had only recently become more widely available by 2006. They function here as means of forging a quick connection, or showing affection.

Like so many of my favorite films, “Still Life” affords the pleasure of spending time with characters and watching events leisurely unfold in real time. Jia’s use of long takes isn’t nearly as programmatic as in films by notoriously “challenging” directors such as Tsai Ming-liang or Bela Tarr. He varies duration and scale freely, moving from long-distance landscape shots to close-ups (though he seldom uses extreme close-ups) to strike a balance between the people and places, both of equal importance, in his movies. While “Still Life” offers several beautiful shots of distant hills, the most enduring image of all is probably that of Han in his tattered t-shirt that somehow looks distinct even compared to all the other tattered t-shirts.

Playful and moody, naturalistic and surreal, “Still Life” is a film not to be missed. It's probably my favorite Jia film, which means I also consider it one of the best films of the 21st century.

Posted by Christopher Long at 9:47 PM