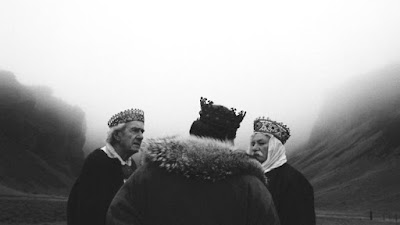 I don't know whether Serra's bravado is sincere or merely part of a very convincing performance act. It also doesn’t matter one whit. (2015 Update: Seven years later, I'm pretty sure it's sincere.)

From the first scene of this unique and extraordinary movie, shot in high-contrast black-and-white digital video, you know that you are in the hands of a director who has complete confidence in his mastery of the audio-visual medium. Serra’s vision is so singular and so intrinsically cinematic it’s a challenge to describe it in words. To borrow a phrase from the Hollywood publicity machine, “Birdsong” is a movie event, a full immersion in the moment, a daredevil plunge into a world that is simultaneously abstract and so tangibly dense that it can hardly be penetrated.

If we can’t penetrate it, we can still talk about it, or at least dance around it. The plot summary is the easiest part: The Three Wise Men wander through the desert looking for baby Jesus. Eventually, they find him. Sorry about the spoiler. It’s the “eventually” that’s the catch, of course. These three kings of dis-orient have traveled from afar, and they don’t really know their way around these parts. They aren’t sure whether or not they should climb a mountain. They change directions and stop for rest frequently. Fortunately, they aren't in any particular hurry. Neither is the director.

Serra is fond of the long take. Really fond of the really long take. The film’s most bravura scene is a nine-minute long static shot in which the Wise Men trudge off into the distance, disappear over a ridge, reappear over the next one, and then begin to walk back towards camera. Or at least they appear to; it’s difficult to tell. The longer the shot is held, the more difficult it becomes to suss out what’s going on which is what makes it so mesmerizing. The desert mirage becomes more hallucinatory the longer you look at it.

“Birdsong” is also a surprisingly funny movie. I have no idea whether or not Albert Serra is a Three Stooges fan, but I couldn’t help make the comparison, especially because one of them (Lluis Serrat) happens to possess a Curly-esque figure. In yet another long take, the Magi jockey for comfortable position as they sleep in close quarters. After debating whether to move a bit to the left or a bit to the right, our hefty friend shouts “Spread out!” Nyuk nyuk. 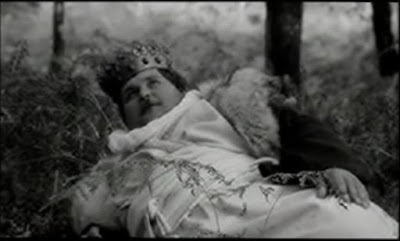 And did you ever think about what the Magi did after they delivered their gifts to the Christ child? Here, they just hang around until Joseph is finally forced to resort to the Biblical equivalent of flicking off the lights. Listen guys, an angel told me I need to escape to Egypt so, um, could you get going now? And oh by the way, Joseph is played by Canadian film critic Mark Peranson who speaks Hebrew while everyone else in the casts speaks Catalan. Why? Because Peranson doesn’t speak Catalan, silly!

“Birdsong” generates an endless stream of breathtaking images and each viewer will have his or her favorites. I keep thinking about a shadowy shot filmed at dawn in which one of the Wise Men, visibly only as a silhouette, breathes the chill morning air in and out in little puffs. He almost seems to be biting at the air. Perhaps he’s praying quietly, or maybe he just likes seeing his breath evaporate. It doesn’t matter. What matters is the sheer pleasure afforded by this strange and evocative image.

And pleasure is what “Birdsong” is all about, specifically visual pleasure. This is for the cinephilic junky who likes to look and keep on looking. Set free from the demands of a taditiaonlly suspenseful narrative, viewers don't need to anticipate the next plot development, the next shot, or ever to ask the question “Why?” You look for the sheer pleasure of looking at something pretty and taking the time (a lot of time) to enjoy it, wallowing in the thrill of witnessing images seldom seen. These are pictures to be scanned from left to right, top to bottom, and then back again. In this sense, Serra’s film harks back to the earliest days of cinema in which, as scholar Tom Gunning has written, the real power of cinema was not in the telling of a story but rather the power of “making images seen” entirely for their own sake. Cinema then was a new way of seeing, which seems relevant to a story of these proto-Christians, pioneers who were the first to look at the world through a whole new lens.

Serra’s sublime slapstick won’t suit everyone’s taste but what worthwhile film does? I have no idea if “Birdsong” is the best Spanish film of the past thirty years, but it is certainly the best film I have seen in quite some time and one that I have not been able to stop thinking about since I saw it six months ago. I watch movies precisely because every now and then something like “Birdsong” comes along.

(2015 Update: Seven years later and I'm still thinking about “Birdsong.” And really disappointed that it still hasn't gotten a home theater release in North America. I can't help but think this is the “purest” of all Christmas movies, or at least in a tie with “A Charlie Brown Christmas.) 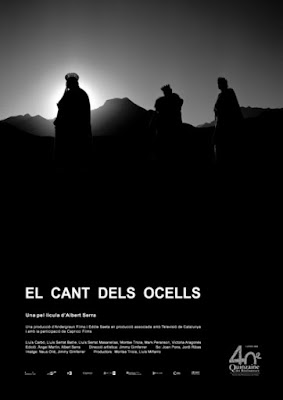 Posted by Christopher Long at 2:37 PM