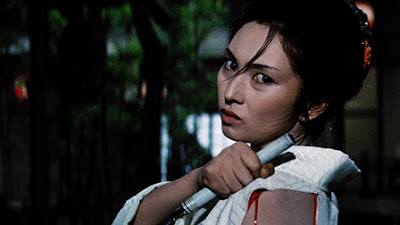 
Forget auteur cinema, this is arterial cinema. When Lady Snowblood strikes with her umbrella sword, blood spurts out in high-pressure streams, arcing majestically as it splatters faces, clothing and, most artfully, previously virginal snow. She didn't choose her name at random, after all.

Adapted from the original manga comic written by Kazuo Koike (perhaps best known for “Lone Wolf and Cub”) and penciled by Kazuo Kamimura, “Lady Snowblood” (1973) tells the tale of its appropriately one-dimensional character who is born for vengeance. Literally. The film begins with the sound of a crying baby (who keeps on crying for a long time) born in prison to a mother who vows that newborn daughter Yuki will carry on her vendetta, then promptly dies.

The origin story unfolds with relative efficiency. ' Round about 1870, Yuki's father was murdered by a gang of petty crooks who also gang-raped her mother. Mom waits patiently to administer justice to one of her attackers, but the rest remain free when she is arrested for the murder. After the traumatic birth, another inmate adopts Yuki and oversees her brutal training at the hands of a pitiless priest. Told she is an asura (a kind of demon), Yuki is molded through trial and terror into the relentless killing machine known as Lady Snowblood and finally set loose on her parents' tormentors some time in the 1890s.

Actress Meiko Kaji had already made her mark in “delinquent youth” films such as “Stray Cat Rock: Sex Hunter” and similarly lurid fare like “Female Convict Scorpion Jailhouse 41” making her both an obvious and perfect choice for the title role. Kaji compensates for a lack of apparent martial arts skill with a calm, commanding presence most forcefully conveyed through her steely stare – the film features many beautifully composed images but returns most frequently to a simple closeup of her piercing eyes and arched eyebrows. Snowblood is a column of stillness who erupts into controlled lightning strikes, a strategy that may only be effective when her half-witted opponents oblige by waiting patiently to be exsanguinated, but, hey, it works, and Kaji is integral to the success. She also sings the movie's theme song.

Director Toshiya Fujita may not be known as one of Japan's greatest stylists, but he exploits his widescreen frame fully, arranging bodies on all sides of the deadly assassin and letting viewers relish her finely-honed ability to hack her way through overwhelming odds. The action scenes are heavy on art direction and careful choreography and low on plausibility, but you're mostly watching for those geysers of blood.

Snowblood methodically tracks down her victims in predictable enough fashion, but the story takes a surprising turn when she encounters a roguish journalist (Toshio Kurosawa) who, after meeting her, is inspired to publish a story titled... “Lady Snowblood.” Don't expect the movie to get too meta, but at least it's the first sign of humor in a story that often wallows in sadism for its own sake – oh by the way, “Snowblood” is a Quentin Tarantino favorite and an acknowledged heavy influence on his “Kill Bill” movies. He even “paid homage” to the theme song. 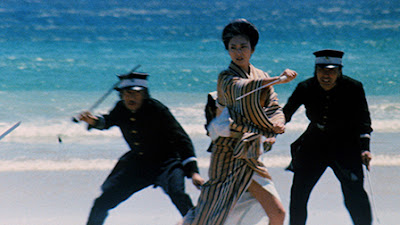 “Lady Snowblood” was followed up quickly by “Lady Snowblood: Love Song of Vengeance” (1974). It lacks the simple-minded purity of the first film's revenge plot, but the more free-form narrative takes our deadly heroine in a slightly different direction. After a decade on the lam as a fugitive, Snowblood finally tires of fighting (though not before tallying a double-digit body count in the first five minutes) and surrenders to the authorities. She is sentenced to die, recruited by the secret police, and then won over to the cause of her intended mark, a radical played by Juzo Itami, perhaps best known to Western audiences today as the director of “Tampopo” (1985).

More hacking, more slashing, though the arterial sprays are mostly saved for the denouement. An early two-minute tracking shot may be the stylistic highlight of both films: Lady Snowblood walks methodically towards the retreating camera as would-be assassins mass both behind and in front of her, each eventually lunging to inevitable death by her casual sword stroke.

Oddly, Lady Snowblood recedes into the background for most of the sequel as a story of government corruption and resistance by the disenfranchised people takes center stage. Both films are set during the Meiji era as Japan transitioned from feudalism to the beginnings of a 20th century global empire. Economic miracles benefited only a few, providing Lady Snowblood the opportunity to serve as a champion of the people, though neither film explores this aspect of her mission in much detail. The “people” aren't exactly presented in the most flattering light either. A grotesque gang of commoners in the first film prepares to “pass around” Lady Snowblood, and the ersatz heroes of “Love Song” are more concerned with their own well-being than with social justice. But, hey, nobody's perfect. 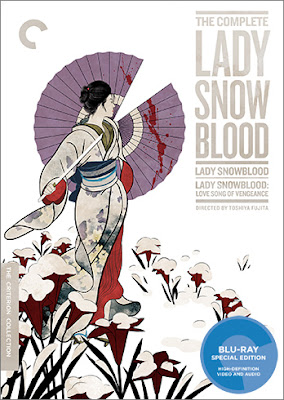 Video:
Both films are presented in their original 2.35:1 aspect ratios. From Criterion: “These new digital transfers were created in 2K resolution on a Scanity film scanner from new 35 mm low-contrast prints struck from the original camera negatives.” Level of detail isn't as sharp as in many Criterion high-def transfers and the most notable quality is how pale some of the skin colors. Checking a few other online sources, Lady Snowblood doesn't look quite so alabaster from other sources, but it's possible this is a truer representation of the original – it would make sense. Unfortunately, I have no way to know. The blackest images (or parts thereof) look a bit blocky to me, perhaps as a result of some contrast boosting.

However, while these two transfer may not be among the elite Criterion 1080p efforts, they are still very strong overall and with the vivid reds I'm sure its ardent fans appreciate the most. That ruby red Karo syrup – I mean blood – sure stands out.

Audio:
Both films have LPCM Mono audio mixes. The lossless audio is clean throughout though the audio sounds fairly flat with no real sense of depth – but this may be a product of the original source as well. Music sounds pretty good. Optional English subtitles support the Japanese audio.

Extras:
Alas, Criterion has only included a few interviews and trailers along with the two “Snowblood” films, both of which are on the same Blu-ray disc.

Under the menu for the first “Lady Snowblood” you can access the two newly recorded interviews. The first is with Kazuo Koike (10 min.), writer of the manga from which the film was adapted. He talks about his inspiration for creating what was, at the time, an unusual character: a female assassin. The second interview features screenwriter (Noro Osada) who scripted both films, the second in collaboration with writer Kiyohide Ohara. Osada discusses the challenges of adaptation in general and specifically the challenge in adapting manga, something he had never attempted prior to “Lady Snowblood.”

Final Thoughts:
I usually find revenge stories tedious and sometimes outright repellent. I didn't always find the “Snowblood” films compelling, but the bloody charms mostly exceed the limitations, in large part thanks to Kaji's serene, iconic lead performance and an array of lovely widescreen compositions. The extras are pretty skimpy here, but the high-def transfers are solid. With two movies on one Blu-ray, this release makes for a pretty solid deal.
Posted by Christopher Long at 3:53 PM