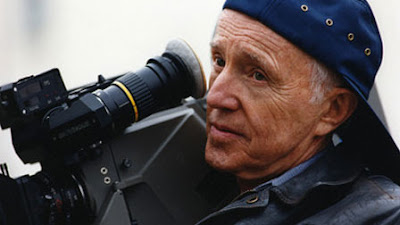 
According to his son Jeff, Haskell Wexler died peacefully in his sleep yesterday at the age of 93. Like Alain Resnais and Manoel De Oliveira, Wexler had entered the pantheon of venerable presences whose shadow loomed so large over the world of cinema for such a long time that everyone had become accustomed to assuming he would be around forever. They had always been making movies, after all. As with Resnais and Oliveira, it comes as a shock to learn that was only a fantasy.

After serving in the U.S. Merchant Marine during World War II, Wexler began working as an assistant cameraman in the late '40s. It was the first step on a path that would cross virtually every aspect of American cinema during the last half of the 20th century and into the 21st.

By the '60s, Wexler established himself as one of the preeminent cinematographers of his or any other generation. After serving as director of photography on Elia Kazan's “America, America” (1963) and Tony Richardson's “The Loved One” (1965), Wexler netted his first Oscar for Mike Nichols' “Who's Afraid of Virginia Woolf?” (1966). He would win another in 1976 for his pioneering Steadicam work on Hal Ashby's “Bound for Glory” after settling for a mere nomination on a little film called “One Flew Over the Cuckoo's Nest” the year before.

Lensing many of the landmark achievements of the '60s and '70s wasn't enough to keep the politically engaged Wexler fully occupied, however. He would direct numerous activist documentaries, including “Introduction To The Enemy” (1974) with Jane Fonda and Tom Hayden, a film potent enough to get boycotted by The American Legion, a distinction that put Wexler in the same admirable company as Charlie Chaplin. He remained almost supernaturally active in recent years, directing “Four Days In Chicago” (2012), a film about the Occupy Moment's protests at the 2012 NATO summit, and working tirelessly as cinematographer on numerous documentaries by other directors.

Wexler's influence extended from Hollywoood feature film to independent documentary, but cinephiles may know him best for his visit to one of the points in-between. The remarkable fiction-documentary hybrid “Medium Cool” (1969) not only became one of Wexler's primary calling cards, but was also swiftly embraced as one of the defining films of late-'60s America. Below, you will find my review of the Criterion Collection's 2013 release of Wexler's masterpiece.

I cannot offhand think of a figure analogous to Wexler in American cinema. He was a true original, a force of nature whose legacy we are only just beginning to process. 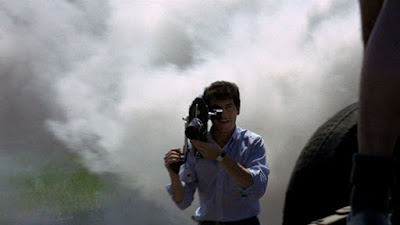 John (Robert Forster) is a Chicago-based television news cameraman who loves his job, until he is forced to confront the reality of it. That's exceedingly difficult because John has come to rely on the lens as an intermediary agent, a distorting shield that transforms the world into shots meant to be captured rather than life meant to be experienced. He wants to approach his job like his sound man Gus (Peter Bonerz) who views himself as just “an elongation of a tape recorder” - detachment as the defining mark of a professional. But it's 1968, and the bullets that ended the lives of Martin Luther King Jr. and Robert Kennedy have shattered any illusions of journalistic impartiality, rendered it impossible, or at least profoundly irresponsible, to remain aloof.

Cinematographer Haskell Wexler (fresh off an Oscar for “Who's Afraid of Virginia Woolf?”) had no qualms about diving right into the political and social muck as he prepared to direct his first feature. Wexler was initially hired by Paramount to adapt a novel about a boy who found wildlife in New York City (Jack Couffer's “The Concrete Wilderness”) but scrapped the story entirely for a film that engaged with more immediate concerns. Wexler had already worked on a few documentaries and integrated so-called non-fiction techniques with his fictional material. If there's a fight between the two, non-fiction wins by a knockout.

John quits his job after finding out the studio has been giving his footage to the FBI (be vewy quiet, they're hunting for wadicals) and falls in with relocated West Virginia war widow Eileen (Verna Bloom) and her ten-year-old son Harold (Harold Blankenship), both struggling to adjust to life in the big, bad city. John bonds with Harold; John and Eileen wind up at the obligatory late '60s psychedelic rock show; they groove at the roller derby. I last watched “Medium Cool” about fifteen years ago and I admit I had forgotten almost everything about these parts of the film. What I remembered was the yellow dress. 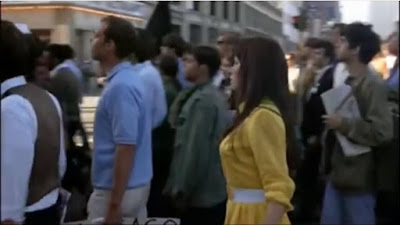 As various plot threads unravel, Eileen winds up searching for Harold in the midst of the protests surrounding the 1968 Democratic National Convention while John covers the event from inside the cocoon of the Chicago Amphitheatre. Wexler and other crew members follow Verna Bloom, decked out in her now famous yellow dress and staying gamely in character, as she winds her way through the chanting protesters and the police and National Guard decked out in riot gear. Narrative concerns recede as the camera simply tries to track the yellow dress that flits in and out of sight as the blood begins to flow and tear gas envelops the crowd as well as the crew, producing the much-discussed shout of “Look out, Haskell, it's real!” This legendary fourth-wall-shattering warning, by the way, was not real, but was added in post-production.

Wexler's camera (along with camera operator Mike Margulies) might not have shaped the events of 1968 (the film wouldn't reach theaters until 1969 – no instant YouTube uploads), but it has shaped the way the events have been remembered. As seen in the film, TV news crews, encumbered by their vehicle-mounted film fortresses, captured only the faintest sense of what was happening in the crowd as police and guardsmen waged war on American citizens. Wexler's sprier band of outsiders brought viewers into the heart and the heat of a shameful moment that now looks like a rehearsal for Kent State. And as the phrase “brave performance” is carelessly overapplied by film critics, let's take a moment to acknowledge that Verna Bloom showed true grit here.

“Medium Cool” deserves a better fate than to be reduced only to this climactic sequence. There are other great moments like when a group of black activists wrest control of an interview from John, the cinephilic name dropping from Godard to “Mondo Cane,” and Peter Boyle in his first credited role. But the vibrancy of the actuality footage (including scenes from National Guard training exercises shown earlier in the movie) eclipses most of the more traditionally scripted dramatic sequences, and compensates for a heavy-handed bracketing device that suggests a sense of closure somewhat out of place in a film defined by ruptures and chaos.

In a world where camera phones are ubiquitous and few filmmakers still cling to notions of objectivity in documentary, perhaps “Medium Cool” really does look dated. That is if, by dated, we mean pioneering, perceptive, and a vital capsule of an extraordinary moment in American history. We wouldn't still be talking about it if it wasn't. 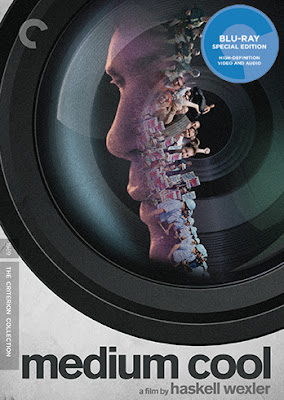 Video:
The film is presented in its original 1.85:1 aspect ratio. The new digital transfer has “been approved by Haskell Wexler” and this high-def treatment looks fantastic. There's no mention of a restored print, but the source is obviously in excellent condition because there is very little damage evident. A well-preserved thick grain structure gives the film an appropriately gritty look. When you see just how bad the clips in the Cronin documentary (an extra on the disc) look you can appreciate this version all the more.

Audio:
The LPCM Mono track is solid if not dynamic. Most dialogue is clearly mixed. I believe that much of the sound in the street scenes was recorded separately from the image or added in post-production, but the mix still provides the impression of really being immersed in the moment. Optional English subtitles support the English audio.

Extras:
Criterion has stacked the deck, starting with two commentary tracks. The first was recorded in 2001 and features Haskell Wexler, editorial consultant Paul Golding, and actress Marianna Hill. The second is newly recorded (2013) for this release and features film historian Paul Cronin.

“Look Out, Haskell, It's Real!” (2002, 53 min.) feels like a complete documentary but is described as consisting of “extended excerpts.” The documentary includes interviews with Wexler, author Studs Terkel (a consultant for the film credited as “Our Man in Chicago”), actors Robert Forster, Verna Bloom and Peter Bonerz as well as others. Extensive clips from “Medium Cool” are interspersed with the interviews, and the clips are badly washed out, but the interviews look fine and provide plenty of substantive content. Second is a collection of excerpts from Cronin's 2007 documentary “Sooner or Later” (16 min.), in which he catches up with Harold Blankenship. Blankenship was a child actor from West Virginia who never appeared in another movie. He was long considered “lost” to film history until Cronin found him. This portrait is vivid and engaging; film fame did not lead to personal or financial fortune for Mr. Blankenship.

Criterion has also included a new (2013) interview with Wexler. The interview covers much of the same ground as seen in Cronin's documentary, but at 15 minutes it's still worth watching.

“'Medium Cool' Revisited” (33 min.) is a 2012 documentary in which Wexler returns to Chicago, and also many of the locations from “Medium Cool,” in order to record Occupy's protest at the May 2012 NATO summit. I can't say it's as riveting as “Medium Cool,” but it's a nice addition.

A Trailer (3 min.) rounds out the collection.